"Imagine if you could create a 3D model of an entire city in less than an hour." Paul McRoberts, vice-president of Autodesk's infrastructure product line group, presented that enticing scenario to the media this week when introducing two additions to the company's BIM for Infrastructure portfolio: Autodesk Infrastructure Modeler 2012 and AutoCAD Utility Design 2012. The conceptual design and electrical distribution network design programs joined Autodesk's collection of software intended to help infrastructure professionals increase efficiency and remove waste from their processes.

McRoberts sketched a daunting picture of the challenges facing professionals who design and manage infrastructure. In addition to completing more work with fewer employees (by, say, modeling Boston in record time), industry professionals need to replace old, crumbling systems; build out new infrastructure to support growing populations and green energy production; and communicate the details of these projects to a variety of stakeholders. Autodesk seeks to ease all these burdens with its two newest releases.

McRoberts introduced Autodesk Infrastructure Modeler as "a great product for getting the public and corporate stakeholders involved in the early stages of the project." In this case, "the public" includes city councils and NIMBY ("Not in my backyard!") activists who require project information to alleviate their concerns. As McRoberts explained, that requires "relating [project] information to someone who's a librarian or an accountant, someone who's not from this industry ... people who aren't all that familiar with the design and construction world." In addition to communicating project proposals, the conceptual design software enables GIS, planning, and civil engineering professionals to model existing infrastructure, import detailed models, and create 3D thematic maps. 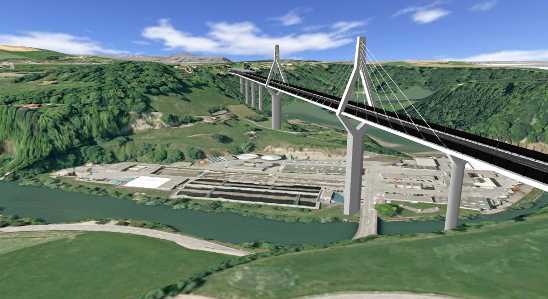 A bridge project depicted in Autodesk Infrastructure Modeler. Image courtesy of the City of Fribourg, France.


Lynda Sharkey, technical marketing manager, infrastructure, noted that the traditional concept design cycle is "very clumsy": designers create visualizations for their clients, who review them and request changes, sending the designers back to the drawing board for another round — and repeat. With Infrastructure Modeler, she explained, users "can change and enhance the model as [they] get more data," instead of starting over from scratch. Proposal management tools enable users to switch between multiple alternatives, and sketch tools enable designers to work quickly, then import that conceptual data into Civil 3D or AutoCAD Map 3D as the basis for detailed designs.

To incorporate additional information, users can specify tooltips and hyperlinks to outside data such as blueprints or web sites. Designers can also incorporate the element of time into the model; it will update to only show assets relevant to the specified timeframe. "[The model] never has to be static," said Sharkey, "and it can grow and change with your project." 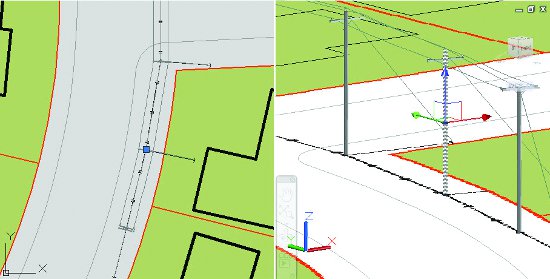 AutoCAD Utility Design is intended to streamline the design of electrical distribution networks, including the placement of assets such as utility poles.


"Waste" is not defined solely as what the dumptruck carries away from the build site, said McRoberts; wasted time is also a major concern. "This kind of technology can reduce weeks to days and days to hours," he stated. That savings is essential in the face of staffing shortages. "We have a lack of people coming into the industry, and the experience that's in the industry today is getting ready to retire," he explained.

In keeping with the theme of saving time, Sharkey asserted that the ability to set up templates is one of the biggest benefits of AutoCAD Utility Design. Predefined standards also streamline the workflow. "Apart from consistency," she continued, "the rules and standards add intelligence to the model." Sharkey also stressed the value of rule-driven analysis, so that users "don't fall victim to the 'eight binders, a calculator, and a spreadsheet' method of analysis." The predefined engineering rules are applied during the design process.