New York–based Chobani is a company best known for supplying Greek yogurt to millions of people across America. When its facility in New Berlin reached maximum production capacity due to increasing consumer demand, executives had to develop additional manufacturing space to capitalize on the momentum of the Chobani brand.

Chobani contracted Tippmann Construction to design and construct a production and distribution plant to be located in Twin Falls, Idaho. The contractor turned to Manhard Consulting, a full-service civil engineering and surveying firm, to assist with the land development phase of the project and complete a site design under the aggressive schedule mandated by Chobani.

Faced with 200 acres of sloping Idaho terrain that would impact the site layout and ground elevations linked to a 939,000-square-foot building pad, Manhard needed to work closely with Tippmann to make decisions quickly and accurately. The abbreviated timeline imposed by Chobani, together with an aggressive design-build schedule, required close coordination between the Manhard team, Tippmann, and various other consultants involved in the design of the production facility building.

With all the grading constraints associated with the logistics of arriving milk supply trucks, finished product truck maneuvering, truck docks, and other support services, a traditional approach to site layout and grading would take too long and would likely throw the project off schedule. Furthermore, stormwater drainage had to be considered to minimize the total area of ground disturbance.

Employing a traditional iterative process would have required Manhard’s project engineers to design a grading scheme and perform earthwork analysis, which would likely add weeks to the project schedule. Based on the analysis results, the engineers would then have to modify the grading design and perform a separate analysis to achieve the desired work balance condition. To accommodate these challenges and provide viable options to its client, Manhard required a different option — an integrated design approach.

The exact placement of the facility on the site was highly variable. With each modification, the grading design, earthwork balance, and ultimately amount of time needed to complete the earth-moving operations were in flux. Using Bentley SITEOPS, Manhard analyzed earthworks and generated multiple site design options with associated costs in a matter of days, as opposed to months.

The ability to work in real time with the conceptual design software streamlined collaboration, enabling the teams to sit down in a design charrette format and work on the site plan as a group with easy-to-understand 3D renderings and visualizations of the grading concepts. SITEOPS enabled Manhard to work with Tippmann to quickly and easily make changes and decisions regarding the site plan, and immediately see the resulting impacts to the earthwork for the project. “Without the power of Bentley SITEOPS, the critical site planning decisions never could have been made at such an accelerated pace,” stated Frederick Thaete, director of engineering at Manhard. 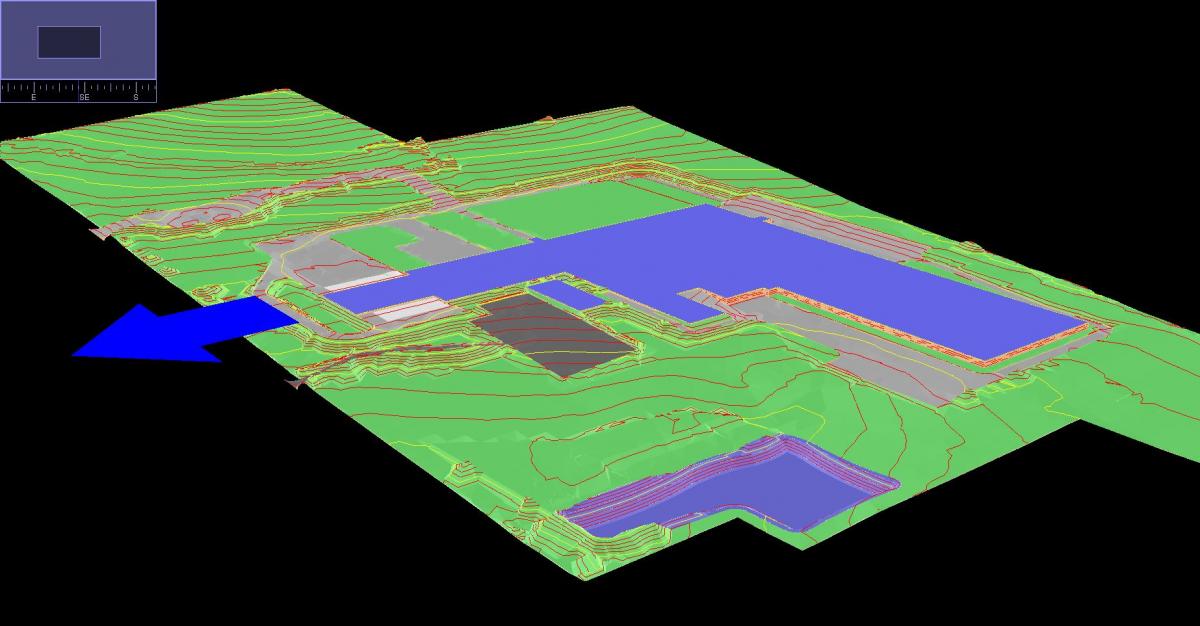 SITEOPS enabled Manhard to consider the best options and choose a grading design that minimized the volume of earth moved, significantly reducing the time associated with preparing the site for building erection. Image courtesy of Bentley Systems.

Manhard began design of the site in November 2011 for ground-breaking on December 17, 2011, and on December 19, 2012, the world’s largest yogurt plant was officially opened for production. Timing was critical to the success of the project, and developing the land using SITEOPS enabled the team to work collaboratively, streamlining decision making. Having immediate feedback on site grading concepts with quick cost estimations and revisions available through SITEOPS saved the design team time that was critical to the 326-day delivery of the production facility.

In addition, the cost-optimization features in SITEOPS helped provide a grading design that minimized the volume of earth moved, reducing the time and grading costs associated with preparing the site for the start of building erection to keep the project on schedule. Thaete noted, “The mission of delivering the project within the unprecedented time frame requested by the client would have been virtually impossible without utilizing SITEOPS.”

To erect the Twin Falls yogurt production plant, 2,000 construction personnel were recruited, and upon its the plant created more than 300 jobs upon opening and continues to act as a catalyst for economic growth in Twin Falls and the entire region. Less than three years later, in March 2016, Chobani announced a nearly $1 million expansion to the Twin Falls manufacturing facility.

About the Author: Katherine Flesh