When selecting locations for its annual Year in Infrastructure event, Bentley Systems favors sites that showcase the role of AEC projects in reshaping landscapes, building utilities, and all the other tasks that make modern cities possible. In recent years, the event has been held in Amsterdam — a city that owes its existence to dikes, dams, and canals — and London, dependent on its network of bridges and tunnels. This year, the host city was Singapore, an island country whose land mass has grown by nearly a quarter over the last half-century, thanks to an ambitious series of land reclamation projects.

Land reclamation was also the foundation for a Hong Kong project by international construction company Leighton Asia, which this year won the Be Inspired Award for BIM Advancements in Construction. The winning project is the Hong Kong Boundary Crossing Facilities (HKBCF) site, which is built on a 370-acre man-made island. Housing customs and immigration facilities, the transportation hub will eventually process 250,000 passengers and 60,000 vehicles per day. 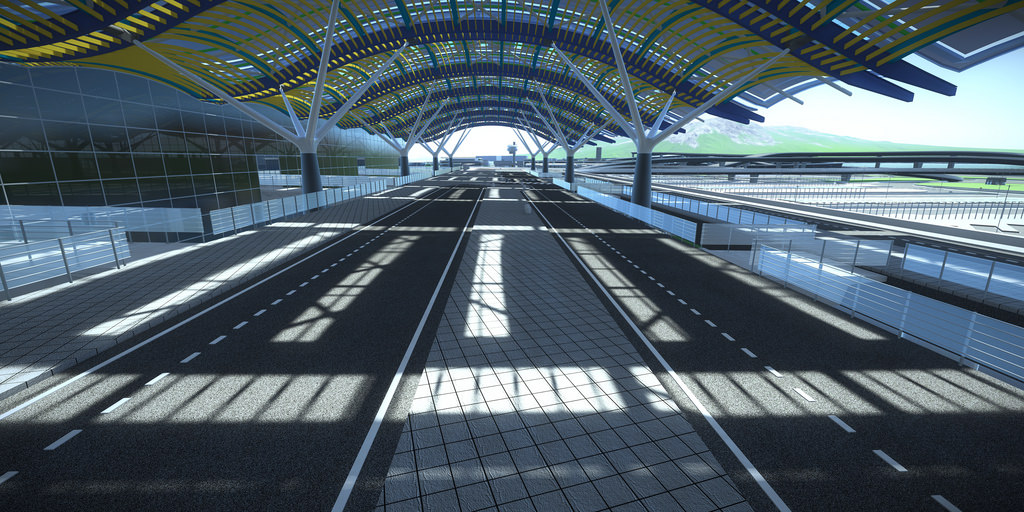 The passenger clearance building in the Hong Kong Boundary Crossing Facilities is designed to accommodate 60,000 vehicles per day. Image courtesy of Bentley Systems.

The HKBCF will be a gateway to the Hong Kong–Zhuhai–Macao Bridge, a bridge-and-tunnel crossing that will connect three major cities bordering China’s Pearl River Delta. At more than 30 miles long, the Hong Kong–Zhuhai–Macao will be the largest bridge/tunnel complex in the world, including both the longest sea-crossing bridge and the deepest underwater tunnel ever made.

Unifying a Fragmented Team with BIM

According to Michael Kin Wong, survey manager for Leighton Asia, building information modeling (BIM) technology was essential to managing this multifaceted, complex initiative: “There are too many fragmented parties, including two consultants, eight main contractors, and countless subcontractors. How to efficiently manage the project within the schedule and budget has become a big headache to every party.”

Wong explained, “To facilitate the efficient communication between contracts, we have combined the BIM of eight contracts into one single civil BIM, thanks to the georeference feature of our BIM, and Bentley civil BIM technology.” The Leighton team relied on multiple Bentley Systems solutions for the project, including AECOsim Building Designer, Bentley LumenRT, ContextCapture, Bentley Descartes, MicroStation, Bentley Navigator, OpenRoads, and ProjectWise.

Wong differentiated civil BIM from building-only BIM as being much larger in scale and encompassing many infrastructure systems beyond buildings, such as the massive underground utilities network. In addition to the BIM modelers that would be needed on staff for a standard building-only BIM project, the civil BIM required enlisting surveying expertise to secure accurate georeferencing information, and creating and managing a library that includes street furniture and seafloor, pipe, and utility objects, as well as building objects.

The library was created according to the standards of local utility departments — not only to ensure consistent work over the lifetime of the project, and also to guarantee usefulness of the model to after project completion, Wong explained. “When the BIM is passed to the owner, which is the government, the information are consistent and accurate to that standard. This can facilitate their access management in the future.”

The BIM Payoff for the Team and the Owner

Wong cited a number of advantages of using BIM, including early discovery of mistakes, more efficient communication, and improved safety and accuracy.

Viewing the passenger clearance building roof supports in BIM allowed collaborators to thoroughly examine their unusual shape, and understand it more clearly than they could with 2D drawings of the same parts, Wong said. ”Information is also attached in BIM, so we can all have mutual understanding about materials and dimensions.”

Team members also used the BIM models to create scaled-down 3D-printed models of the complex construction parts: “This has further enhanced the mutual understanding and communication.” They were also able to draw on the dimensionally accurate BIM information to prepare wooden forms for the sand molds used to cast steel parts.

After that, laser scans of the cast parts were compared with the BIM data to ensure that the final result adhered to the design specifications. Finally, the point cloud comparisons were exported to 3D PDF for easier sharing and communication, Wong said. “Civil BIM does not only create a 3D model for visualization; instead, it creates a value for the whole construction progress.”

Wong also credited BIM with speeding construction, as it enabled the team to coordinate fabrication of steel roof sections in multiple cities simultaneously, at the same time that ground construction was being carried out in Hong Kong. “It [increased the speed] of the whole construction progress by at least two times,” he said. The laser-scanning verification process was also used on the roof sections to ensure design accuracy.

BIM also helped the team to resolve a major safety issue in advance, by simulating a low-profile installation method that moved the roof segments into place using pairs of horizontal tracks. This was crucial because traditional installation processes using overhead cranes would have exceeded height restrictions imposed by the nearby airport.

Each section of the wavy steel roof had to be moved into place without being lifted overhead by cranes and potentially impacting flight paths. Image courtesy of Bentley Systems.

And with some 240 miles of underground utility lines, it was inevitable that some clashes would arise; with BIM, more than 3,000 were detected. Solving clashes before construction reportedly saved about 12% of the construction budget.

“In our project,” Wong observed, “BIM is a continuous lifecycle: As construction goes on, [updates to the] as-built records are carried out by the survey team [with point cloud data]; as-built data are then updated into our design BIM, and become an as-built BIM.” This process reportedly reduced survey costs by 15%. “By combining spatial and nonspatial information of each element, as-built BIM will become a very useful [resource] for our client to manage the site in the future.”