Is CAD in the Cloud Right for You?

Viewpoint: CAD delivered via the cloud offers many benefits to most users, but poses problems for others. These considerations will help you make the best choice for your needs.


Trusty desktop-based CAD software has been the staple of designers for decades. In the past few years, however, there’s been growing interest in the potential of delivering CAD software via the cloud — with plenty of claims and counterclaims about its strengths and weaknesses.

Despite all the hype, the cloud isn’t a silver bullet for all business problems — it’s just one new way of using CAD software. For some designers, the cloud will be ideal; for others, not so much. In this article, we’ll help you determine what makes sense for you and your applications.

The Different ‘Shades’ of Cloud

An overwhelming majority of designers run CAD purely on-premises (i.e., on computers at their company’s office). With this approach, you must be on-premises to use your CAD applications. The cloud, on the other hand, allows you to access that software and your files from anywhere — meaning you can work from home, a hotel room, or while contracting at your client’s offices.

If you’re thinking of using the cloud to host your CAD software and designs, it’s important to understand that this isn’t an either/or choice. You don’t have to immediately ditch your on-premises technology if you don’t want to; instead, you can mix and match to find the right approach for you. CAD in the cloud is ultimately about giving you more choice.

Here are the feasible scenarios for most of us when it comes to running CAD in the cloud:

Now that you understand the basic distinctions between the options, how should you choose between them?

Eight Factors That Affect the Decision

As you consider the following factors, you can assess your priorities and decide which scenario might be best for you. 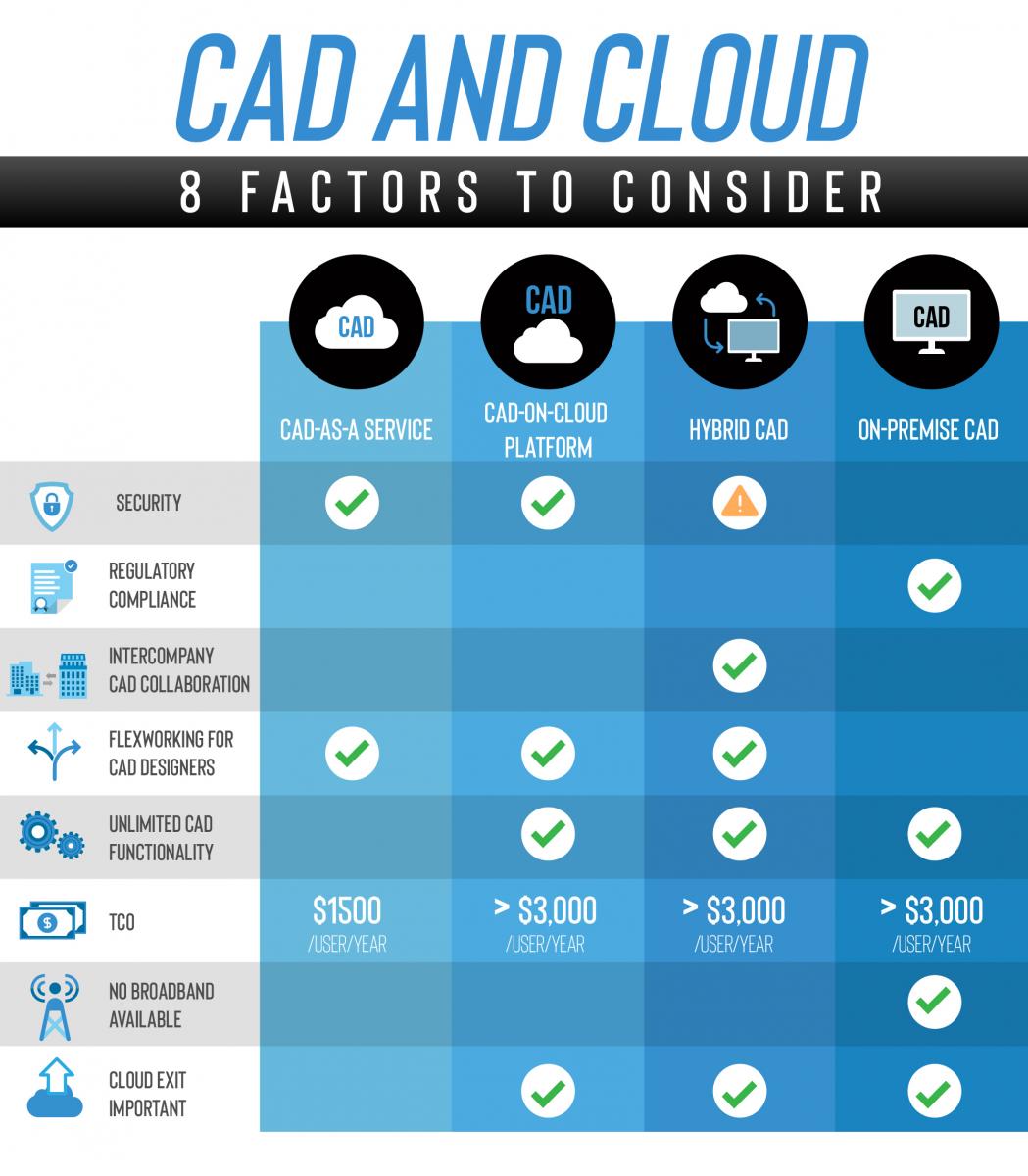 One of the primary issues raised by critics of CAD in the cloud is the subject of security. They point to examples of data breaches — such as Marriot Hotels’ 2018 mega-breach where a weak password in the cloud may have been partially responsible.

No IT infrastructure is ever going to be completely safe. But the cloud is analogous to traveling by plane: Just because there have been crashes before, that doesn’t mean everyone should stop using the technology. The fact of the matter is that the cloud will, in most cases, be far more secure than any hard drives in workstations and servers in your company’s offices. Due to their specialization and scale, providers of cloud services protect themselves with a variety of measures including:

SaaS and PaaS approaches give you all these protections — and in a hybrid model, the data held on your cloud instances will also achieve this level of security.

Until all your design team’s computers are held behind lock and key, there’s always going to be a risk of break-ins, social engineering hacks, and rogue employees stealing physical computers. Running CAD in the cloud, by comparison, is much safer.

This is one area where cloud computing is simply not going to be a practical option for certain sectors. Rules such as ITAR (for defense applications), and HIPAA and GDPR (for medical devices) make it risky from a compliance perspective to store data about designs in the cloud, as do various national laws on critical infrastructure projects.

About the Author: Len Williams