Joining the Standard and Professional tiers of the MCAD software, a new Enterprise offering is intended to address the market’s most dispersed, analysis-hungry, and security-conscious customers — which are not necessarily the largest.


How big does an organization need to be to qualify as an enterprise? To hear Onshape tell it, size is not as important as a company’s goals and challenges. The newly launched Enterprise tier of Onshape’s cloud-based CAD software costs a minimum of $20,000 per year — a total that could be reached with just a dozen users, divided between the “Full” and “Light” user categories. “From our perspective, that would be a small enterprise,” Dave Corcoran, Onshape cofounder and vice-president of product, told Cadalyst. (For more on the user provisioning options, see the “Is Enterprise the End?” section below.)

Corcoran explained that Onshape Standard is equivalent to “a seat of CAD”; Onshape Professional is intended for companies with more complex requirements, including release management and company settings; and the new “premium” tier, Onshape Enterprise, is for “people who have more advanced design process needs and desires” — including coordinating work among geographically distributed team members, keeping data secure among internal and external contributors, and gaining more insight into how projects progress.

These “more advanced” needs may arise in a manufacturing company with 1,500 employees, or a specialty product development firm with 15. And just as there’s no set size that makes a company a candidate for Onshape Enterprise, there’s also no single industry that dominates among the company’s customers, Corcoran observed (although Onshape has seen particular interest from the medical device industry, which operates under stringent regulation and is very security-minded).

What companies in Onshape’s Enterprise market do have in common, Corcoran explained, is the desire “to be on the cutting edge of insight”: to have real-time visibility into who’s working on which tasks, how efficiently various components of a project are being completed or handed off, and where the overall design process is bogging down or flowing smoothly. It’s what Abe Feldman, senior product designer for Onshape, called “an appetite for data and analytics about product development … older systems can’t deliver any data about a design in progress.”

In addition, many of these companies are driven by a feeling that they are being “left behind in support for their manufacturing design process … relative to other disciplines,” Corcoran believes. The deficiency is often highlighted by comparison with another type of business system. For example, companies may have deployed a customer relationship management system such as Salesforce, or perhaps they are exploring software development to create Internet of Things (IoT) devices, Corcoran explained — and once they’ve experienced the functionality of those systems, they start to demand more from their design solutions.

The “insight” Corcoran lauds refers to users’ ability to gather analytics and to instantly see how projects are progressing, as the software not only tracks all changes, but also which user has done what task, and when. I had to wonder whether this type of monitoring — while obviously appealing to project managers — might raise any objections from other team members. “We have encountered a little of that,” Corcoran replied, “[but] people have come to realize it’s liberating rather than Big Brother–ish.” Real-time visualization, he believes, is “just as important for peers as it is for managers … it’s as enabling for the worker bees as for the bosses.”

Corcoran explained that ongoing updates are better for everyone involved in a project, because they prevent effort duplication and the creation of content based on outdated assumptions about the project’s status. He likened it to his experiences as a member of a software development team, which suffers when no one gets access to a particular developer’s output until that person “thinks it’s perfect.” As a result, that devloper’s peers are in the dark about how that piece of the puzzle is turning out, and by the time they submit their own work that relates to it, everything may have changed. “There’s a lot more that has to be reconciled than if it had been done incrementally,” he said. 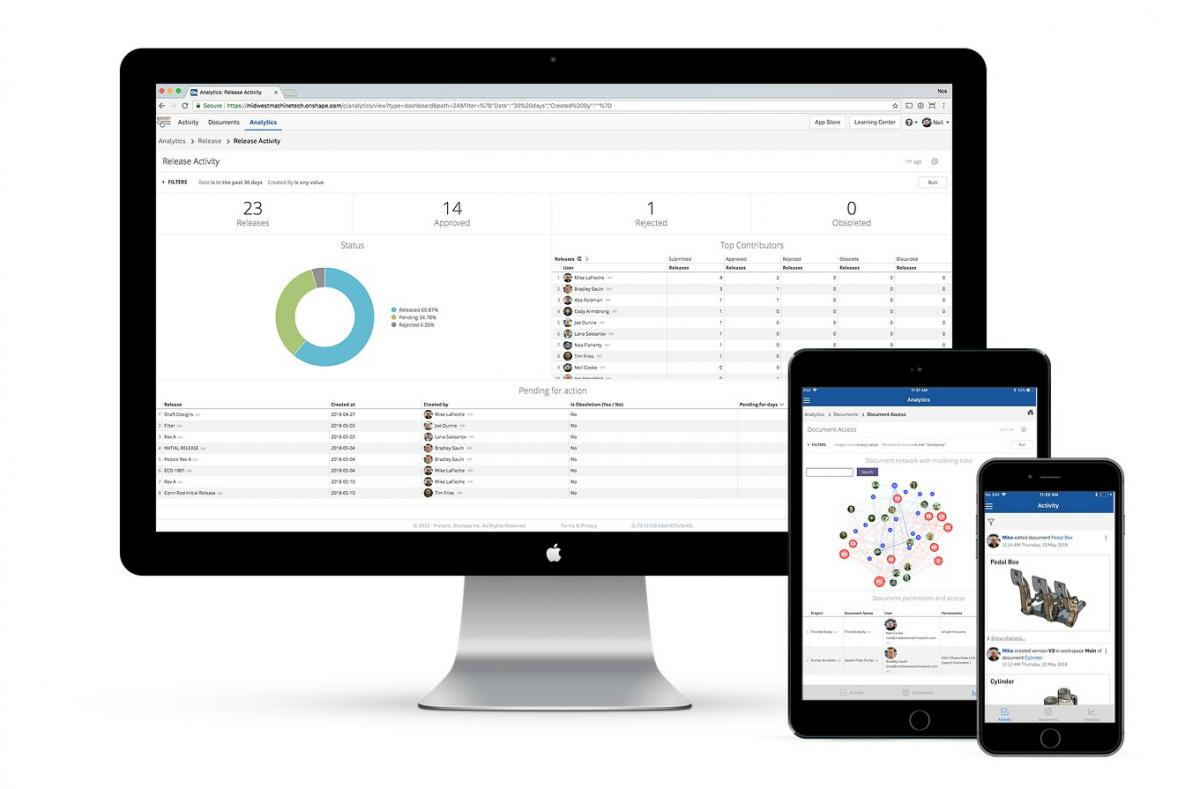 Onshape Enterprise enables executives and managers to monitor design activity in real time, on any computing device. Users can learn about team progress via project dashboards, real-time activity feeds, time series visualizations, and contributor leaderboards. “These analytics cannot be done any other way … unless everybody has access to the data in real time, and Onshape is the only system that provides that,” Corcoran asserted. Image courtesy of Onshape.


Is Enterprise the End?

Onshape Enterprise offers two different types of user provisioning: Full and Light, which cost $3,000 and $300 per user per year, respectively. The “Light” category is intended for employees and stakeholders who sometimes need access to CAD data, but don’t create it: vendors, customers, executives, and sales and marketing personnel, for example. These users can view, comment on, and mark up designs, but cannot perform editing or admin tasks, and they do not have final approval of releases.

Does the launch of Enterprise complete Onshape’s lineup? Corcoran believes that with three overlapping, yet distinct offerings, “we cover most of our addressable market.” He expects that Onshape’s mid-tier offering, Professional, will continue to be the most popular of the three.

It is possible that the company may pursue an additional solution at some point in the future, to address the very largest enterprises. “Never say never,” Corcoran said.