Comparing itself to Yelp, the new site aims to become the go-to resource for companies evaluating new products.


“We want to become your trusted site for real user reviews — the Yelp for CAD software,” said Matt Gorniak, cofounder of Chicago-based G2 Crowd, which has been live in beta mode for two weeks.

G2 Crowd takes the concept of Yelp — the popular site for consumer reviews of restaurants, services, hotels, and much more — to a professional level, in several ways. First off, the site focuses strictly on professional products, namely all major business applications as well as CAD and product lifecycle management (PLM) software. More significantly, G2 Crowd goes the extra mile to authenticate user reviews by linking each reviewer to his or her LinkedIn account, providing visibility into the reviewer’s real name and professional background.

Since its launch, G2 Crowd has attracted more than 2,000 registered users who have contributed more than 10,000 ratings and reviews of 1,500 products and services.

G2 Crowd aims to become the go-to resource for companies evaluating new software platforms. Once the site is fleshed out fully, including a comprehensive representation of software products and significant numbers of user reviews for each, Gorniak said, it would likely provide the majority of the information that any company would need to compile its short list of software options in a given category.

“Here’s the data from hundreds of users. What else do you need to know?” Gorniak quipped, acknowledging that large corporations investing millions of dollars in new software would likely supplement their searches with additional research. “I’m not saying that this should eliminate direct product evaluations. But at the very least, it is enough to get to your short list and accelerate the decision-making process. For small companies especially, you really wouldn’t need much more.”

G2 Crowd has several measures in place to ensure the integrity of user reviews. Connecting each G2 Crowd user to an account on the LinkedIn professional networking site “shows expertise and trust and sets the bar up high for sharing authentic information,” Gorniak said. “Your name is out there.”

Additionally, automated checks can identify when someone works for the developer of the product reviewed. All users can flag any review as unhelpful if it seems suspicious; enough of those flags will trigger human intervention to assess the credibility of the review and reviewer.

So far, the site hasn’t experienced a problem with biased reviews, according to Gorniak. Another cofounder, Godard Abel, stated in a recent press release, “Most users offer their reviews altruistically; they’re eager to share their real-life experiences and knowledge with their peers and to help them avoid common pitfalls. It’s a service they themselves want to have available, so they’re more than happy to share their honest opinions with the global business community.”

The CAD/PLM category on G2 Crowd is in its infancy, with just a few products listed and very few reviews. Gorniak explained that any registered user, whether independent or representing a software developer, can submit a form to suggest a product to add to the lineup. The site reviews the information and, if approved, adds it to the system in the appropriate category. 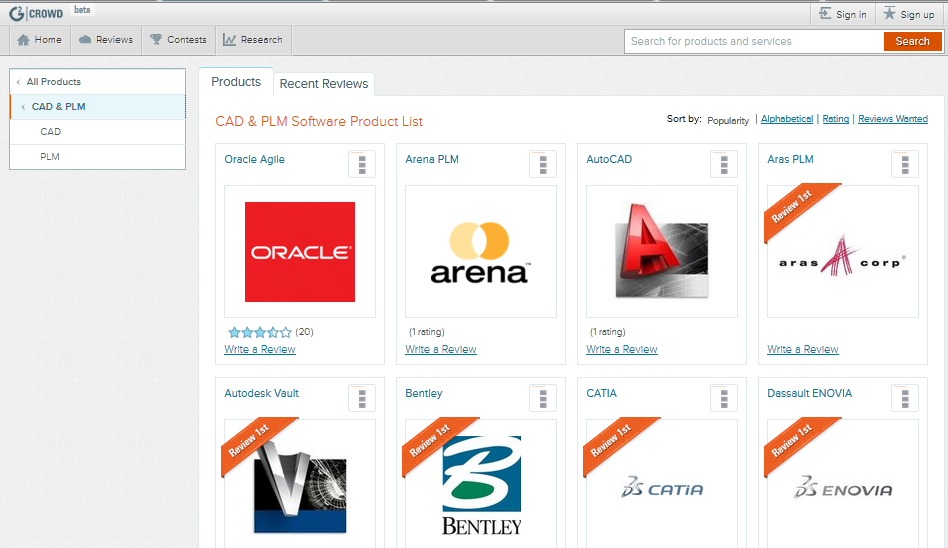 To increase participation, G2 Crowd incents users to write reviews, rate the reviews of others, and invite friends to the site, awarding points based on the action performed. Contests award prizes to top performers, from $5 coffee gift cards to an iPad mini, and users can earn $20 for reviewing selected products.

Gorniak believes that professional recognition on G2 Crowd is a powerful incentive as well. The more a user participates, the more visible his or her profile becomes. “Users want to be acknowledged as experts. Prizes are great, but what people really want is recognition and the chance to talk with peers who know a lot. You can see on the site who are the top contributors by month or of all time, overall and by category or product. You can see right away who the experts are for a category.”

The visibility of users, especially those highlighted as experts, leads to networking among peers — and even to paid consulting opportunities, Gorniak said, hinting at another perk to come but declining to elaborate yet.

Grids for each software category compare products that have 20 or more reviews each. The grids display product strength based on an online algorithm. Vendors and others can embed these grids on web sites; beginning next week, they will be able to embed software reviews as well. 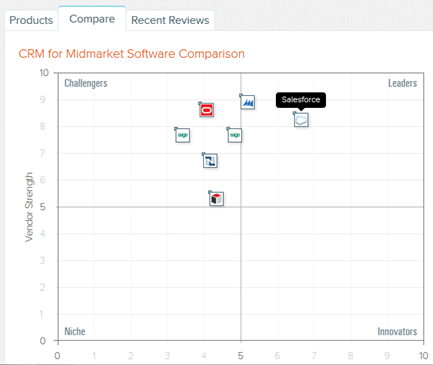 Grids on the G2 Crowd site allow visitors to compare software products based
on information collected from user reviews.


G2 Crowd also aims to become a resource of user data for software developers, industry press, and others who want to analyze and interpret the data for their own use or to share with the community. For those who do not wish to cull information direction from user reviews, G2 Crowd will sell reports that compile the crowd data for each product category, listing and comparing product features and other criteria. The first such report, for customer relationship management (CRM) software, retails for $399 but is currently on sale for $99.

The company’s long-term vision is to disrupt traditional technology researchers such as Gartner, which, Gorniak said, often deliver reports only once every year or two, don’t always disclose the source of data, and often don’t base recommendations on actual software use.

The trio of cofounders behind G2 Crowd includes Abel, described as a serial entrepreneur, as well as Gorniak and Tim Handorf, partners in developing BigMachines sales configuration software. Abel said, “After spending more than 15 years in the enterprise software industry, we grew frustrated by the inefficient software selection process, which relies primarily on inexperienced business users slogging through vendor spin, industry-sponsored whitepapers, and dated analyst reports.” They’ve seen companies spend as much as a year’s time and more than $1 million on the selection process and still not feel fully confident about a decision.

Gorniak said, “We looked at that this situation, then we looked at crowdsourcing sites like TripAdvisor, where crowds have kept me from making a big mistake. You combine these together and you think, How come I know more about picking a hotel than about picking a multimillion-dollar software package?” Thus, G2 Crowd was born.

“We are self-funded with $2 million of our own money,” Gorniak said. “We are not relying on vendors to fund this. We are committed to the cause and our mission.”

G2 Crowd will likely remain in beta testing for the next six months, Gorniak says, building up registrants and reviews. “We’re far from where we want to be. We want to consumerize CAD products” — that is, democratize technology buying and selling and give a voice to anyone who has experience using a product, the way people are accustomed to doing with consumer products today. “We want to become your trusted site for real user reviews. This is about having a trusted site, quality data for everyone to consume, and truth.”