At Macworld today, CAD solutions provider Graebert announced ARES, said to be the first CAD solution to run natively across Microsoft Windows, Apple Macintosh OS X, and Linux operating systems. Selling for $495 to $995, the solution offers DWG as its native file format, an AutoCAD-compatible command line and scripts, and more than 400 commands.

ARES also includes features such as built-in VoiceNotes — which embeds and saves voice data in drawing files that other users can hear when accessing files — and 3D modeling support via the latest ACIS libraries. The Windows-based version is available immediately, and Mac and Linux versions will be available in Q2 this year. Other upcoming versions will be available for Microsoft Windows Mobile devices. ARES for Apple iPad and the Google Android operating system are under active evaluation for porting as well, the company reports. At Macworld, said CTO Robert Graebert, "we will gauge interest in providing ARES on the iPhone and other Mac-based mobile platforms." 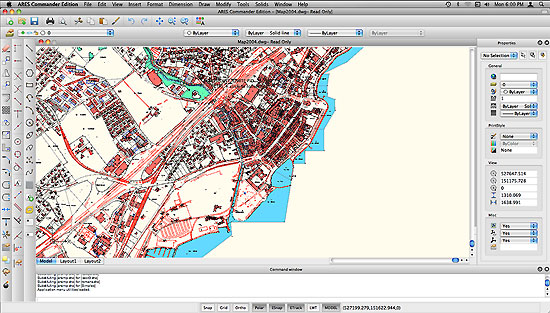 Other key features of ARES include:

According to Robert Graebert, ARES offers 400 of the 700 commands available in AutoCAD and supports 100% of the 50 most-used AutoCAD features and "most use cases." ARES maintains most of the command names familiar to AutoCAD users but aims to improve on AutoCAD by offering command aliases that are more intuitive or offer more functionality, said Robert Graebert — for example, an easy-to-use but highly functional Drafting Styles dialog box. "The point is to innovate but also support the commands people are used to."

ARES has been in development for five years, or 250 man-years, and has been in beta testing for more than a year, according to Robert Graebert. Development has focused on a number of core benchmarks, with performance being a leading criterion: ARES is said to be three to five times faster than other CAD packages on any platform for operations such as open and save. "We try to be faster or just as fast as AutoCAD in most cases."

ARES will ship in a standard version for $495. The ARES Commander Edition, $995, offers all the standard features plus programmability and 3D support. Both versions are available immediately for Microsoft Windows and as trial downloads from the Graebert web site. Those interested in participating in the closed beta testing of the Mac and Linux versions can request an invitation from the Graebert site as well.

Berlin, Germany–based Graebert, formerly known as GiveMePower, has been developing CAD software since 1983. The company is known internationally for its mobile CAD solutions such as SiteMaster and PowerCAD, the predecessor to ARES, which reportedly has more than half a million users worldwide. The company traditionally has targeted small- to medium-sized businesses (SMBs) and individual users in the AEC, surveying, electrical, and 2D/3D mechanical CAD markets, Robert Graebert told Cadalyst. It has more than 50 active value-added resellers and OEMs — those companies that use the software as the basis for developing their own CAD solutions.

Graebert is a founding member and sits on the board of directors of the Open Design Alliance. ARES supports DWG import, export, and DWG 2009 native format. Support for DWG 2010 is scheduled for Q2 this year.