Herrera on Hardware: But the company’s second generation of Threadripper PRO will face a far more competitive landscape than the first.

Semiconductor markets move fast. Expectations to speed product cycles and deliver hefty generation-to-generation performance gains put vendors under constant pressure to eliminate any chance of delays or disappointing upgrades. Winning the race to the next release of a new product has always been paramount, and rarely do periods exist where one vendor can patiently take all the time it needs to deliver its next generation product without having to worry about a rival devouring its market share.

The market for workstation-caliber CPUs serving CAD applications has experienced such a period for much of this century, thanks to the de facto monopoly Intel has held onto with rare exceptions. Without credible competition nipping at its heels, the company’s market share has occasionally tolerated delays and less-than-enthusiastic reception to its CPUs, as the only practical alternative, AMD, was seldom able to offer up compelling alternative products.

That’s all changed, and 2022 in particular is leading to a consequential crossroads in the market for hardware serving CAD. AMD now rides some serious momentum in the PC and server markets, and moreover, it’s established a beachhead with its first top-tier workstation model in over a decade: Lenovo’s ThinkStation P620. Intel meanwhile has uncharacteristically faltered in execution over recent years, just recently righting the ship with what’s shaping up to be its most formidable set of workstation-caliber CPUs in generations.

The combination has led us to a point where one of two things will happen in the coming quarters: following up with its new 2nd Generation Threadripper PRO 5000 family, AMD will finally break through from niche player and present substantial long-term competition in this space to Intel, or its progress will stagnate or fade in the face of Intel’s resurgence, as it did over a decade ago. We won’t know how things will pan out for a while, but the story will be one to watch, particularly for CAD users out shopping for new hardware.

Déjà vu for AMD in the Workstation Market: Will It Play Out Differently This Time?

For the bulk of this century, Intel has had the market for workstations virtually to itself. That may surprise, as AMD has always maintained a meaningful presence in the market for desktop and laptop CPUs serving mainstream corporate and consumer markets. But the same has not held true in professional computing corners, where a decade and a half passed without a single top-tier workstation OEM (read “Dell, HP, or Lenovo”) offering an AMD CPU option.

The last time AMD seriously challenged came in the first decade of this millennium, catching Intel at a moment of competitive weakness and earning sockets in workstations from HP, IBM, and Sun, among others. But AMD subsequently failed to keep up with timely and compelling new generations of products and eventually again found itself absent in top-tier vendors’ wares.

Flash forward to the last few years of the CPU industry, where AMD again has capitalized on a vulnerable Intel. Where Intel had become lethargic in its architectural evolution back in the 00’s, this time the market leader stumbled uncharacteristically executing on its most venerable of technologies: silicon manufacturing. With a competitive, overhauled CPU architecture in Zen and access to an industry-leading process from TSMC, AMD’s first workstation-targeting Threadripper PRO 3000 generation succeeded in finally cracking the top-tier marketing in 2020 with Lenovo and its ThinkStation P620 workstation.

Now able to build off that foothold — along with a wider range of CPU products that can serve the breadth of the market as well — the time is ripe to parlay that initial win into meaningful market share. But just as it did in the second half of the 00s, Intel is regaining its footing, working past its recent struggles and in 2022 ramping what appear to be its most compelling CPUs to serve CAD workstations, from mainstream to maximum-demand applications.

Lenovo has announced it will make 5000 series parts available on its existing Threadripper PRO 3000 based ThinkStation P620. 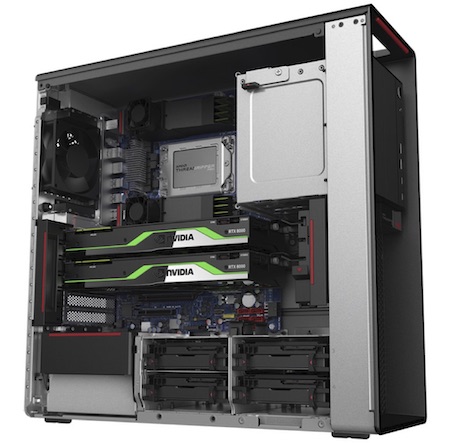 Threadripper PRO 5000 Delivers a Substantial Performance Bump Over its Predecessor

Threadripper PRO 5000’s Zen 3 core has already seen production in both the Ryzen 5000 family and the Milan generation EPYC processors for servers. AMD describes Zen 3 as the company’s “most comprehensive design overhaul of the Zen era.” Compared to second generation Zen, Zen 3 promises an impressive 19% higher IPC (instructions per cycle), the rate that generally dictates single-thread throughput. Now, take the usual grain of salt with any broad-brush performance metrics like this one: it doesn’t apply to every application or use case, but assimilates a range of select workloads.

For a CAD-focused look at Threadripper PRO 5000, I ran the same set of benchmarks on the new generation 12C 5945WX that I did for the previous 12C 3945WX from 2020. To assess multi-threaded aptitude, I leaned again on SPECworkstation’s multi-threaded workloads along with both Cinebench and PassMark, enabling max threading (12 threads in the case of the 12C models here). I ignored the smaller scaling return of HyperThreading for this exercise. And to get a handle on single-thread (1T) performance improvements, I ran Cinebench and PassMark in single-thread mode (constraining to a single-thread execution is not currently possible with SPECworkstation). On average, the 12C 5945WX ended up outperforming the 3495WX by 25% on the MT CAD-oriented test suite and 21% on the 1T set, both results supporting AMD’s broad-brushed 19% higher IPC figure. 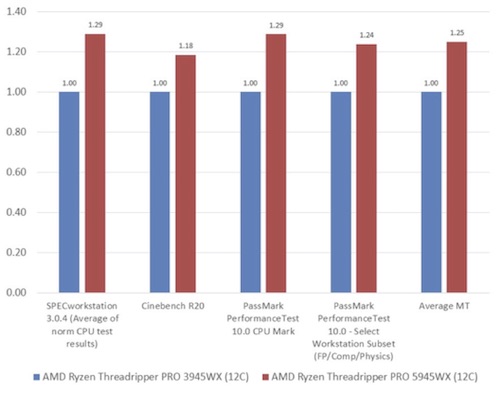 Summary of multi-threaded benchmarking CPU results for the Threadripper PRO 5945WX, normalized to the 3945WX.

Summary of single-threaded benchmarking CPU results for the Threadripper PRO 5945WX, normalized to the 3945WX.

Back when AMD launched the first generation Threadripper PRO, coming up on two years ago, I cautioned that while its lower core count 12C and 16C SKUs weren’t exactly mainstream products, they were by no means boutique products serving top-end performance niches only. While that latter description is fair for the 32C and 64C SKUs, 12C and 16C came at a price accessible to buyers in the mid-range of the CAD workstation market. Still, in 2020, a quad-core  CPU held the dominant market share, pushing a 12C or 16C CPU to at least the upper end of market’s middle.

In 2022, however, the market’s median core count is pushing up, on the back of Intel’s market-hogging 11th Generation Core (Rocket Lake, covered here) transitioning to 12th Generation Core (Alder Lake, covered here). With not only 6C and 8C SKUs at very economical price points, Alder Lake’s top-performing offer 12C and 16C SKUs will shift that market center up, thereby putting Threadripper PRO more directly in the higher-volume workstation mix.

Beyond simply delivering higher core counts, Intel’s Alder Lake Core family and technology-sharing sibling Sapphire Rapids (expected later this year under the Xeon brand) will mean far more daunting competition for the second generation of Threadripper PRO than the first had to deal with. Think the comparison to Core is inappropriate for Threadripper PRO? Isn’t Threadripper PRO’s competition in this space exclusively Xeon? To some degree yes, but overall no. From the standpoint of pricing and specs, Threadripper PRO would line up more naturally against Xeon, as both shoot for similar levels of core counts and memory performance (i.e. number of channels). But ultimately, it’s the buyer that determines the competition, and the CAD customer base in particular has decided that Core is competing with Xeon. Today, a significant majority of CAD workstation buyers choose Core rather than Xeon.

And if Core is competing with Xeon, that means it’s competing with Threadripper PRO as well. Yes, it’s coming at both brands from below, but that’s often proven a potent point of attack in the marketplace. Undercutting by price while arguing few critical tradeoffs has allowed Core to not only cannibalize Xeon in workstation markets like CAD, but it may surprise to learn that it’s now taking more share than ever in fixed, single-socket segments: selling more than 2 to 1 compared to Xeon.

The tradeoffs of going with Core have now become one fewer, with Intel removing one of the most notable advantages that Xeon has held over Core for single-socket workstations: Error Correction Code (ECC) memory support. As this column covered here, ECC provides extra insurance that no instruction, data, or mathematical errors are ever accidently introduced, an occurrence that — while rare — could mean system crashes or worse, incorrect and undetected results. Combine Alder Lake’s higher core counts (up to 16C), innovative new microarchitecture, and now ECC memory support, and Core CPUs’ competitive position should only improve.

This column plans to address the capabilities offered for CAD service by both Alder Lake and Sapphire Rapids as hardware becomes available.

The parallels back to the AMD’s first and temporarily successful foray into the professional workstation market are remarkable. Nearly twenty years on, we are again at a point where AMD has successfully parlayed the combination of its own new innovative technology and a chink in Intel’s armor to establish a solid foothold in the market for workstation-caliber CPUs. This time around, however, AMD is in a very different position than it was in the mid-00’s, when it was unable to sustain momentum after gaining an admirable foothold in the market for workstation CPUs.

Based on testing with appropriate CAD-relevant benchmarks, Threadripper PRO 5000 is a worthy successor to AMD’s first generation product. With mainstream core counts moving toward 8C, it’s not quite mainstream, but its 12C and 16C SKUs certainly represent accessible options to entice would-be mainstream buyers a bit higher. And its 32C and 64C still represent CPU options without any real competition — at least today. Its goal to establish itself as the clearly superior option, though, will only get tougher in 2022. Where the first generation Threadripper PRO 3000 arrived on the scene with Intel getting by with older and less competitive Xeon W parts, the new 5000 series will face an awakened Intel’s new Alder Lake 12th Generation Core and (likely later this year) Sapphire Rapids Xeon.

By the end of this year, we should have a good idea if a more capable and strategic AMD can turn Threadripper PRO’s early traction into a credible, long-term rivalry with Intel for CPUs serving high-demand professional computing applications like CAD. . . or not.