Herrera on Hardware: This month we test and analyze two systems with three different SKUs, weighing the specifications for core count, base clock, and boost clock when evaluating a CPU for CAD.


In last month’s installment, we took a deeper look at the engineering tradeoffs that shape modern high-performance CPUs. Realities in physics and engineering mean that one choice in CPU design — for example core count — has varying and sometimes counter-intuitive impacts on the other critical performance metrics, such as base and boost frequencies. This month, we pick up where we left off, ready with test platforms — two systems (the BOXX Apexx A3 Denali and Puget Systems’ X570-E) and three Ryzen 5000 SKUs — to validate (or not) the expected impact in both the multi-thread and single-thread (1T) workloads common in CAD workflows. On top of the 8C Ryzen 5800X and the 16C 5950X shipped in the the two systems, we also swapped in a third CPU to compare, a 12C 5900X provided courtesy of AMD. See the breakdown of these systems below. 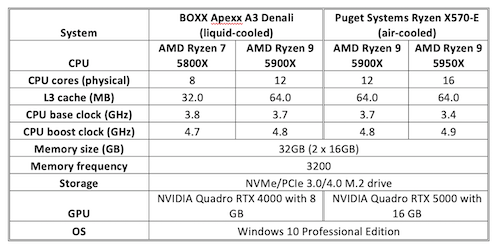 Specifications for the test systems.

More Cores Can Yield Higher Performance, but Not with Every Job 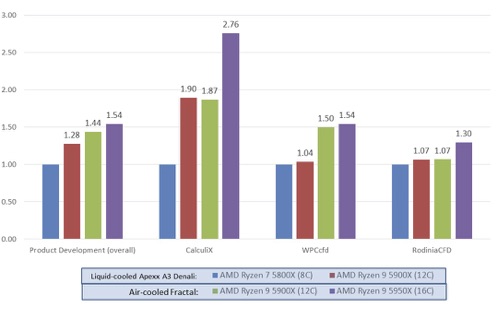 The results running the SPECworkstation 3.0.4 Product Development Suite on the two systems and three Ryzen 5000 CPUs (normalized to the Ryzen 7 5800X on the BOXX Apexx A3 Denali).

As shown by the results (above) running the SPECworkstation 3.0.4 Product Development test suite, representing multi-threaded workloads common to CAD workflows, the SKUs with more cores provided higher performance. The improved performance is consistent, moving up from the 8C (eight core) AMD Ryzen 7 5800X up to the 16C AMD Ryzen 9 5950X, with the Ryzen 9 5950X outperforming the Ryzen 7 5800X by 54% (and that’s with Ryzen 7 using the air-cooled system and the Ryzen 9 using liquid-cooled).

The gains for the higher core count SKUs come despite some decline in the work completed per core, which declines to some degree, based on that lower base frequency and conflicts in sharing system level resources, such as L3 cache, external memory, storage, and graphics.

Still, the conclusion is clear: if your CAD work is dominated by multi-threaded workloads — such as simulation and rendering, then you should be more concerned about having more cores in your workstation, regardless of how much the base clock drops.

The higher-core count Ryzen 5950X besting the two lower-core count Ryzen 5000s on multi-thread capable workloads is not a surprise, despite the former’s lower base clock. The more interesting analysis, and the primary motivation behind this testing exercise, is to compare the single-thread performance as a function of base and boost clocks for our three Ryzen 5000 SKUs. Secondarily, we want to find out how much liquid-cooling might help in a nominally clocked system (ie., not overclocked).

The tests we ran included Cinebench R20 and four components of PassMark Software’s PerformanceTest 10, the latter selected for their particular relevance in CAD workflows: physics, compression, and floating-point. All five were run with systems constrained to execute only one thread at a time. The first, albeit not surprising, take-away is the tight grouping of the results. It’s fair to ask, why you would want to weigh such differences when they’re so small, with no more than a 4% range across tests and SKUs (normalized to the 8C, liquid-cooled AMD Ryzen 7 5800X). Hold that thought though, until we look at how boost spec is defined.

More than assessing the magnitude of the differences, this analysis determines which CPUs under which type of cooling performed the best on 1T workloads. Specifically, did it track base frequency or boost frequency? And, if more closely tracking boost frequency, did the increased efficacy of a liquid-cooled system appear to help the CPU maintain a higher boost for longer amounts of time? 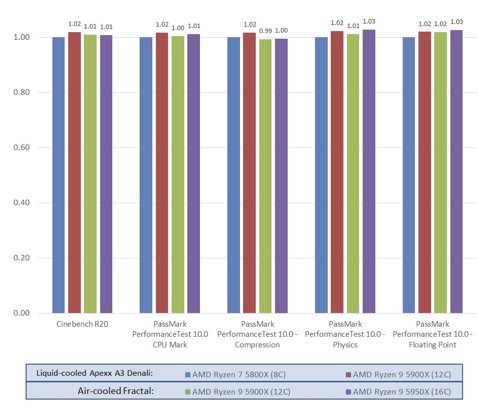 1T testing results for our two test systems and three Ryzen 5000 SKUs show similar results, all within a 4% difference.

Despite the small margins involved, we arrived at some consistent conclusions. To begin with, the performance does track the boost clock more than the base clock. It’s a result that is understandable and can influence your CPU choices.

All CPUs seemed to do just fine maintaining boost rates on the one busy core, without falling back to base rates. Clearly, the significantly trimmed thermal output generated from just one core cranking kept temperature sensors in check and therefore clock rates up. Parametric modeling is single-threaded in nature, so if that’s most or all you care about, then from this data you’d be inclined to think about boost more than base clock.

Furthermore, if we look at the one common SKU across both systems — the 5900X — we see that in all cases, the liquid-cooled system outperforms the air-cooled, albeit only by a percentage point or two. Still, that does appear to support the notion that the liquid-cooling helps the CPU maintain a higher and/or longer boost clock, just as we thought. Furthermore, this indicates that if overclocking is not the goal — liquid-cooling is going to have a bigger impact on multi-thread computation which pushes the CPUs to their thermal limits much more often.

It’s worth noting that while the X570-E does not have the benefit of liquid cooling, Puget Systems air-cooled solution is anything but cookie cutter, including a premium Noctua CPU cooler combining a hefty elevated heatsink that efficiently dissipates heat transferred through seven heat pipes from the Ryzen chip lid. While this design is not cheap, it’s significantly more effective at both cooling and noise reduction than a conventional vanilla heatsink. Still, for the purposes here, we’ll let the X570-E workstation generally represent today’s ubiquitous air-cooled designs versus the Apexx’s liquid-cooled system.

Complicating matters a bit is that boost frequency is defined by the minimum metric, not a maximum or nominal figure. That is, if power and thermal budget allows, a CPU core can exceed the boost frequency spec, making the spec really the lowest level the boost clock rate is guaranteed to reach. It’s worth noting that this ability to exceed has nothing to do with overclocking the part, as the part run at nominal external frequency will do this on its own, if and when possible.

The 1T testing bore that out, both on the liquid-cooled Apexx and the air-cooled X570-E. In monitoring frequency, both the 5900X (boost 4.8) and 5950X (boost 4.9) exceeded 4.9GHz on a single core for an extended period running 1T loads. The same data goes to further confirm even a demanding 1T load is far more tolerable in terms of thermal and power constraints than a sustained load that keeps all cores busy. 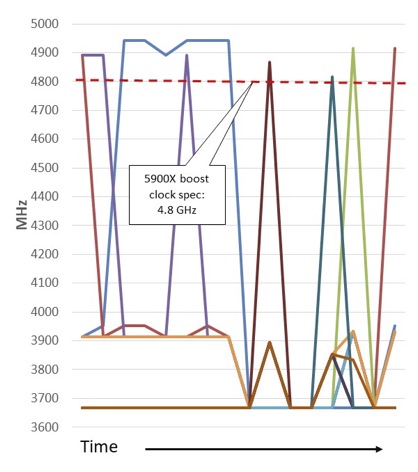 Note in the above chart how the 1T workload shifts from one core to another over time. This behavior is most likely due to the thermal management strategy to move the focal point of heat production around the die, as to best avoid any consistent hot spots and help sustain the boost rate as long as possible.

All the above experimentation, resulting data, and conclusions suggest a key conclusion, one particularly relevant to the CAD community: If we’re thinking about weighing CPU specifications that improve performance for extended, heavy-duty multi-threaded computation, base clocks should be top of mind. Such multi-threaded workloads are unlikely to allow clock rates to be boosted for very long across concurrent executing cores and are therefore throttled by base rates. But, seeing the lower base rates of the higher core count CPU, we might be tempted to conclude that adding cores to improve multi-thread performance might sabotage our 1T rates. Because parametric modeling, the crux of so many CAD workflows, depends so much on 1T execution, we might then steer clear of the higher core count SKUs to ensure we secure the highest base clocks possible.

But this experimentation, data, and understanding of how CPUs manage and optimize boost rates also suggests a different way to look at all that. With higher core count CPUs typically offering faster boost clock rates — rates that often can be sustained with 1T processing — we don’t have to assume lower base clocks mean slower CAD processing, even with the workloads such as parametric modeling that don’t effectively use all the cores. Because even if the higher core count CPU comes with a lower base clock, its (typically) higher spec’d boost clock can allow for faster sustained 1T processing to boot.

That doesn’t mean all CAD pros should use the CPU with the most cores next time they’re out shopping for a new system. But, with this perspective on 1T processing, perhaps some will find another reason to consider making the move to a high-core count CPU, or at the very least, one less reason to avoid them.

What’s Next in Computing Power?

While I chose the AMD-based Ryzen 5000 family this time to serve as a vehicle for exploring the relationships and performance impact of core count, base clock, and boost clock, it’s worth noting that the next major CPU release with a role in high-performance desktop and deskside PCs and workstations is due from Intel. With AMD generally caught up to Intel in high-performance applications — and exceeding in cases such as multi-thread — all eyes are on Intel’s Rocket Lake S (Core 11000 series for desktops) to see how it stacks up to Ryzen 5000. I plan to focus on Rocket Lake S and its appeal for CAD computing in the coming months.