The Evolving Role of the Mobile Workstation, Part 1


Novel at its introduction in the early 00’s, the mobile workstation has evolved from the niche to the essential. Few today would question its value as a mainstay tool for CAD professionals away from their desks. But its role continues to evolve, both in the field and more recently at the office. With a review unit in hand of HP’s latest ZBook Power G8 mobile workstation, this month we get the opportunity to check in on the mobile workstation, both to assess its capabilities as a primary computing device as well as the reasons for its expanded market presence.

Mobile workstation volume has exploded in recent quarters, most notably as a result of the rush to work from home during the COVID-19 pandemic. But, other factors have also been at play contributing to the surge, including the adoption of some for its use in place of — rather than in addition to — the trusted deskside machine. And, longer term, the potential inflection point in a shift of computing power from the client to the server may emerge as the ultimate stimulus for mobile workstations pushing forward. 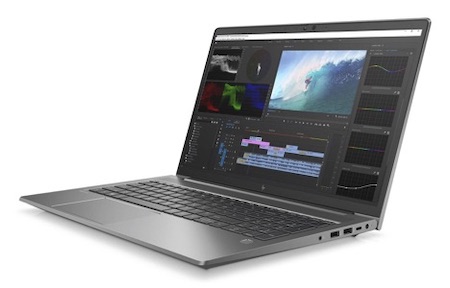 HP’s 15.6” ZBook Power G8 offers a display big enough to be easy on the eyes, and light enough making it easy to carry. Image source: HP.

But first, let’s take a closer look at the ZBook Power G8, just released and setting a solid bar for what a modern mobile workstation can achieve in both mobility and performance. With a starting at price of around $1,500 (assuming Windows 10 Pro is pre-installed), HP’s 15.6” ZBook Power G8 sits smack dab in the sweet spot of the mobile workstation market, both in terms of its size and capabilities. With a display big enough to please the eyes and small enough to carry with ease, the appealing balance of the 15.6” has made it the dominant form factor in the market. Today, 15.6” models account for roughly three-quarters of all mobile workstations sold (the rest are sub-15” and 17.3” models), (source: Jon Peddie Research).

Furthermore, while the Power G8’s thickness and weight doesn’t quite qualify it for the popular Thin ‘n Light (TnL) class of 15.6” mobiles, it’s by no means bulky. Where HP’s ZBook TnL entry, the ZBook Studio, starts under 4 lbs and 0.69" thick, the Power G8 is just a notch heftier, starting at 4.19 lbs and 0.9”. The attractive flip side to that modest increase in size, though, is a lower price and, in some cases, higher capacity. For example, the Power G8 can support up to 64GB memory while the Studio’s more svelte package maxes out at 32GB. That Goldilocks proposition puts the Power G8 — along with its rivals’ similar models, like Dell’s Precision 3500 and Lenovo’s ThinkPad P15s/v series — in the highest volume tier of the highest volume 15.6” segment of today’s mobile workstation market.

The Power G8 is configurable across a wide range of build options, supporting a range of the latest “Tiger Lake” Intel Core 11000 series, shipping in Core i9, i7, and i5 SKUs. What’s notably — though understandably — missing are the couple of workstation-specific Xeon W-11000 SKUs that Intel packages from the same base silicon. While rival products from Dell and Lenovo do support them, HP’s decision is justifiable from the perspective of demand — very few choose the Xeon W option at this price tier.

HP complements the new Tiger Lake line-up with Ampere-generation GPUs from NVIDIA and up to 64GB of non-ECC memory and 2TB of PCIe NVMe SSD storage (no HDDs available, as has become the norm).

Our review system configuration exemplifies the capacity and capabilities that can be stuffed in the Power G8’s modest package. Complementing the premium 2.5GHz (base, 4.8GHz Turbo Boost) 8-core Core i7-11850H CPU is the maximum 64GB of DDR4-3200 memory, and 2TB of high-performance (and becoming ubiquitous) PCIe NVMe SSD storage. Topping off the performance-critical components is NVIDIA’s RTX A2000 GPU with 2GB memory, derived from the company’s most recent Ampere-generation technology.

Of course, if you’re upgrading to the top-end components to create a premiere visual computing machine for CAD, it would probably make sense not to skimp on the display. This review unit certainly doesn’t, as it taps a UHD (3840 x 2160, typically referred to as 4K) 400-nit (measuring brightness) LCD screen capable of the full range of the sRGB color gamut. Though not OLED (which is considerably more expensive and typically reserved for the top-end models of the line), few will complain about an LCD screen at that brightness and resolution. In fact, that resolution correlates to nearly 300ppi (pixels-per-inch), driving clarity essentially to the human eye’s perception limits (given a typical viewing distance).

HP display choices will satisfy virtually any CAD professional on the road, particularly if you opt for the 4K resolution. But, regardless of how good the Power G8’s single 15.6” display is, it will never suffice as the one and only screen for most users at all times. Sure, out of the office, we’ll take whatever we can get, but at this point, we all take for granted the two or three screens at our desks. Fortunately, the Power G8’s native I/O is just the start of the story. Like its latest generation peers from rival vendors, the ZBook Power G8’s provides a bridge to the typical desktop experience via the combination Thunderbolt 4/USB-C port. In conjunction with a dock like HP’s Universal Dock G2, a Power G8 can drive not only one but three 4K displays on the desktop. While I’ll never underestimate the value of more displays — and certainly there are those among us pushing monitor counts to the max — you’d be hard-pressed to find more than a handful of CAD pros not satisfied with three 4K displays.

Add an HP Dock and the ZBook will support up to three desktop monitors. Source: HP.

Add a dock and ZBook Power G8 users can find that full, no-compromise visual experience of a deskside workstation. That begs the question that more than a few are asking: Why not just ditch the big tower for a mobile that rules both the desk and the road? After all, that’s been the overwhelming trend in education, consumer, and many corporate spaces. Long ago now, notebooks passed desktops in sales volume across mainstream PC segments.

While some CAD professionals have followed suit, the majority haven’t — and for good reason. That dichotomy made perfect sense when considering the far heftier workloads CAD professionals run on their hardware. Many corporate and consumer applications place relatively modest demands on their machines, demands that haven’t grown significantly over time. As the mainstream laptop has gained performance over time, it was only a matter of time before its capabilities would cross that threshold where it could adequately handle those modest tasks. Since most users prefer the smaller, more mobile form factor, it’s only logical to see laptops not only taking a larger share of the mainstream PC market, but in many cases becoming a user’s only PC, replacing the desktop.

In contrast, most CAD professionals continue take advantage of every incremental drop of performance they can squeeze from every new generation of hardware. And, with each new generation, deskside performance continues to outpace that of the mobile, due to unavoidable power and thermal constraints facing system designers. Accordingly, the deskside workstation remains the default choice to tackle demanding CAD workloads at the desk.

Read next month’s Herrera on Hardware column for a wrap-up of this HP Power G8 review, along with additional insight into the roles the mobile workstation is playing in CAD today — as well as one role it’s not. And, finally, I’ll share some thoughts on how the evolution of optimal CAD computing platforms may impact the mobile workstation’s prominence moving forward.