Herrera on Hardware: Following up on releases from NVIDIA and AMD, Intel has followed suit, giving CAD professionals a complete set of new CPUs and GPUs from which to choose.


The last three quarters have seen a generational transition from the top industry vendors of both CPUs and GPUs, the primary engines responsible for delivering the 3D visual computing performance that CAD applications demand. Both AMD and NVIDIA launched their most recent generation GPUs, starting with NVIDIA’s Ampere (covered here) and followed up more recently with AMD’s RDNA2 (covered here). And, on the CPU front, 2021 already witnessed the next and arguably most formidable of CPU generations from AMD, built on the Zen 3 microarchitecture and shipping under the Ryzen 5000 series for high-performance desktops and laptops (as well as recently the EPYC brand for server applications).

That left Intel, still the dominant supplier of CPUs in high-performance PCs and workstations, to refresh its wares. This past quarter, the company took its turn, introducing Rocket Lake S, sporting a new microarchitecture and spurring new CPU SKUs bearing both the 11th Generation Core and Xeon W brands. With Rocket Lake S CPUs now out in the market, buyers looking for new workhorse CAD machines now have a full breadth of upgraded platform choices.

More than any other vendor, Intel has benefited from the industry’s migration from those pioneer, traditional proprietary workstations of the 90’s and early 00’s — from venerable names like SGI and Sun — to today’s PC-derived x86 Windows and Linux platforms. By the close of last decade, Intel’s processors and chipsets shipped on virtually all branded workstations worldwide. And the only supplier that could potentially compete, AMD, was struggling to keep up, especially in high-performance PC and workstation markets feeding the CAD community.

The last time Intel felt any serious pressure from AMD in high-performance PC and workstation markets was in the late 00’s, when AMD’s revolutionary Hammer processor caught Intel sleeping with some novel, dramatic improvements in architecture. Its advantages played particularly well in max-performance dual-socket machines, which appealed to those last holdouts still hanging on to expensive RISC/UNIX machines. AMD managed to sign on major vendors HP, IBM, Fujitsu, and even Sun. With Opteron-branded Hammer, AMD made material inroads into Intel’s turf from 2005 to 2008. However, AMD’s subsequent follow-on CPUs to Hammer began to disappoint, in terms of both performance and schedule, and AMD and Opteron faded from the market, essentially back to zero share by the end of the decade. 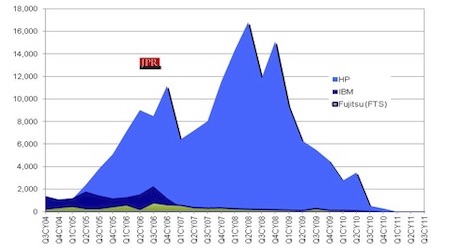 It’s been a while since AMD successfully competed in the market for workstation-caliber CPUs for CAD computing. (Image source: Jon Peddie Research)

That said, the industry seems to be experiencing a bit of déjà vu these days, as AMD is mounting another credible assault on Intel in the market for high-performance CPUs, including those that serve the CAD workstation market. As it did in the mid-00’s, AMD has once again gained a decided advantage over Intel. Like Hammer, it’s got a far more competitive microarchitecture in Zen — with the recent Zen 3 the latest incarnation — but more than that, it’s fortunately tied its silicon manufacturing wagon to the right horse. In this case, that horse is the Taiwan Semiconductor Manufacturing Corporation (TSMC), which in recent years has shrunk its design process more successfully than Intel. With TSMC-manufactured chips, AMD currently holds a significant advantage in both transistor density and performance.

11th Gen Core got its refresh for fixed high-performance desktops and workstations at the tail end of Q2’21 with the release of Rocket Lake S, built on the enhanced Cypress Cove microarchitecture. The same silicon behind the Core 11000 series is what ends up driving the Xeon W-1000 series as well, in this case spawning the W-1300 series.

IPC (instructions per cycle) give an idea of how much computation a microarchitecture can manage per clock in ideal conditions, thereby making a comparison independent of clock frequencies. In the modern age of complex, superscalar CPUs, where the low-hanging fruit of parallelism and acceleration has long been picked, 19% is a respectable generational gain. And worth pointing out, if “19% IPC improvement” sounds familiar, it’s because it’s the exact same broad-brushed IPC gain AMD advertised for its recently released Ryzen 5000.

The launch of Rocket Lake S marks another clear step on the path to higher core counts. Where not long ago, quad-core represented the norm and 6-core options were pushing past the mainstream, Rocket Lake options in their most economical (at least with respect to high-performance platforms suitable for CAD) start at 6 and push to 8, for both 11th Gen Core and Xeon W-1300 SKUs.

Clock frequencies for the first round of Rocket Lake S Core and Xeon W sit comparable to previous generations, from a top base frequency of 3.9 GHz (with 6 cores) to 3.6 GHz (at 8 cores). But it’s worth remembering that the boost clock (what Intel calls Turbo) can rise to a maximum 5.3 GHz with the top end Core i9-1900K and W-1390P SKUs. Check out this recent 2-part column for an analysis of the often inverse relationship of the two clock specs relative to core count, and why you may want to pay closer attention to one or the other when selecting a CPU like Rocket Lake S to handle your most common CAD workloads.

Rocket Lake S bearing the 11th Gen Core and Xeon W-1300 series branding has been picked up by most workstation manufacturers serving CAD markets. The industry dominating trio of Dell, HP, and Lenovo offer the full breadth of SKUs shown in the tables above, and all will be picked up by a range of smaller, premium suppliers of performance machines as well.

Appropriate for the vendors’ most economical fixed workstation products, Dell offers Rocket Lake S in its Precision 3650, HP in its Z2 G8, and Lenovo in the ThinkStation P350. The Precision 3650 is available in both a conventional tower and a small form factor (SFF) chassis, while the Z2 G8 and the P350 offer the tower and SFF, as well as minimalist Mini and Tiny sub-models. All three vendors used the transition to Rocket Lake S to update its GPU offerings as well, most notably upping options to the best available Ampere-generation RTX series from NVIDIA. 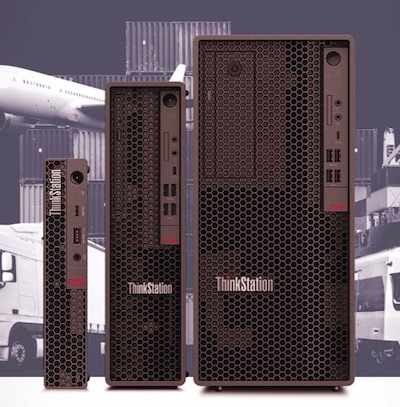 In the space of just a few quarters, the processor industry has managed generational upgrades to both of the cornerstone computing engines upon which CAD professionals rely: CPUs and GPUs. NVIDIA and AMD were first, the former with its Ampere generation GPUs, and the latter with both its Zen 3 generation Ryzen 5000 CPUs and RDNA2-based Radeon Pro GPUs. Last to join with its next generation CPU family targeting high-performance computing markets like CAD is Intel whose Rocket Lake products appear to deliver respectable performance improvements but don’t significantly separate themselves from AMD’s latest. Even in the context of single-thread performance — a metric for which Intel has long proven superior and remains critically important in most CAD workflows — the two suppliers are now generally on equal footing.

It's been a long road back for AMD in its efforts to reestablish itself in high-performance computing segments. On the back of Zen technology and leading silicon processes, the first milestone reached was the delivery of high core count products, where its wares now generally exceed those of Intel. And more recently, the last and more elusive objective was competitive single-thread performance, a goal that now appears checked off with Zen 3 and supporting technologies. We’re now in an era of relative CPU parity, where one might have a modest edge on the other temporarily, only to be displaced a quarter later by the rival’s next-generation — the type of leapfrogging common among two similarly positioned rivals.

And so far, based on general third-party testing, a modest leapfrog appears to be just what Rocket Lake S is delivering. Relative to the best Ryzen 5000 SKU, the top-performing 11th Gen Core SKU looks to just edge out AMD on the type of single-thread execution common in CAD modeling. Conversely, the Ryzen 5000 family would appear to maintain its modest edge in multi-thread computing. (Note: I hope to personally validate results and conclusions in the future with CAD-relevant benchmarking of a Rocket Lake S system relative to the Ryzen 5000.)

As discussed in last month’s column, AMD is now stepping up its efforts to build professional-caliber GPUs rivaling NVIDIA as it’s managed to do with CPUs rivaling Intel. Time will tell, but with the company now able to invest more heavily in areas it may not have viewed as top priority in the past, its future should only look better on that front as well. And the best part? The winners in all renewed levels of CPU and GPU competitiveness are both OEMs, who have the best and most price-competitive components to choose from to build their workstations and high-performance PCs, and customers like CAD professionals, who benefit from superior systems hitting the market.