Herrera on Hardware: The traditional fixed workstation platform continues to evolve to serve a wide range of preferences and demands.


Mention the word “workstation,” and the first image that will come to most — and perhaps especially those with a history during the machine’s hey-day of the late 80’s and 90’s — is the deskside tower. Today, despite the incursion of mobiles, the deskside, or fixed, workstation remains popular among professionals, especially those in the largest served market: CAD. Prior to the pandemic, fixed workstations outsold mobile workstations by nearly 2 to 1. (The rush to work from home pushed mobile shipments way up, but that trend now appears to be subsiding, though the current mix is closer to 50/50).

Despite its age, the fixed workstation platform has been anything but static. Evolving over time, the fixed workstation had until recently settled into a de facto standard of five base models across the industry, especially for top tier vendors Dell, HP, and Lenovo. Four towers, ranging from full size to mini towers, include the Premium 2S (dual-socket), the Entry 2S, the Premium 1S (single socket), and the Entry 1S. And beginning with HP’s seminal and legitimately game-changing launch of their Z workstation line in 2009, the Entry 1S model also often comes in a small form factor (SFF) version, far slimmer and capable of both deskside or desktop orientation. Since its introduction, the SFF has roughly split Entry 1S volume with its bigger, tower sibling.

Adding a Sixth to the Mix: The Mini Workstation

Those five models have recently welcomed a sixth member: the mini. While Boxx was the first vendor I’m aware of marketing a true mini-size workstation back in 2015, HP was the vendor that drove the form factor into the mainstream of the market with its Z2 Mini.  Lenovo is also out in the market with its competing ThinkStation P300 Tiny series.

The appeal of a mini, relative to the available fixed workstation alternatives, is obvious. At just 8.3” x 8.6” x 2.7”, the Z2 Mini traditional tower measures up at a fraction of an SFF model, letting it fit in places no other fixed workstation can. Besides minimizing the space required for use at the desk, the Mini allows easy behind-display mounting. As such, a mini behind a display accomplishes essentially the same thing as an All-in-One model, but eliminates the hard coupling of monitor and computer that some buyers prefer to avoid. Its size also makes it of interest for centralized deployments, where rack-mounting Z2 Minis make for a dense datacenter platform. 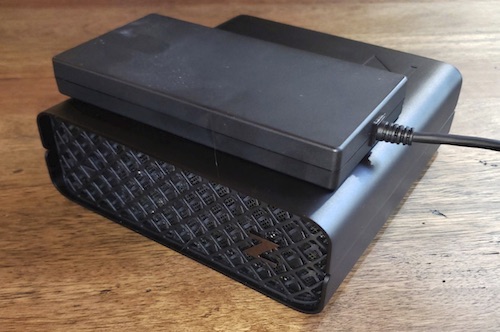 It's worth noting right off the bat, that one of the ways a vendor like HP gets the size down so far is that the power supply is external. The power brick paired with the Z2 mini measures approximately 1” x 8” x 4”, similarly thick but longer than a typical notebook AC adapter.

HP’s Z2 Mini comes wrapped not in plastic or sheet metal but thick and sleek, industrial black matte aluminum. I/O is plentiful on the rear and side, including enough to satisfy all but the most stringent of demands.

The Z2 Mini comes with a sleek professional look, along with available I/O to meet most users’ requirements.

So, What’s the Tradeoff?

There must be a catch though, right? A smaller workstation will sound better to virtually everyone than the bigger one, so why would anyone build or buy the big one? Well, remember that virtually every choice in designing computer comes with a tradeoff, and in this case, if you make the chassis smaller, you’ll likely need to accept compromises in other areas. Accordingly, it’s worth understanding what the tradeoffs of downsizing to a mini are, and if they are important enough to forgo such a convenient form factor.

The most obvious tradeoff to any mini is in physical capacity — with a smaller volume available, there's simply not as much space to stuff in components. Secondarily, generally speaking, expanding capacity or servicing a mini is anywhere from a little-to-none proposition. 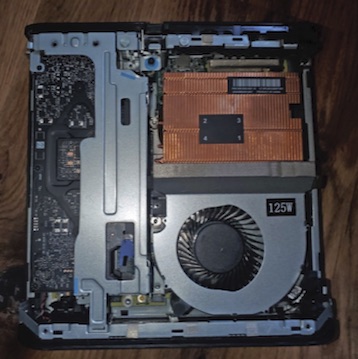 Below are the current specifications for HP’s Z2 G9 line — the tower, the SFF, and the Mini — at maximum configuration. Memory and storage capacity logically decline with form factor size (though also worth noting that not all specs are mutually exclusive, as for example, maxing out SSD may mean compromising maximum HDD storage). But perhaps more notable for prospective buyers is the GPU, with the full tower size and PSU able to handle up to two high-wattage, dual-slot, ultra-high–end GPUs, while the SFF can handle one high-end, single-slot GPU and the mini can manage one mid-range, low-profile card. 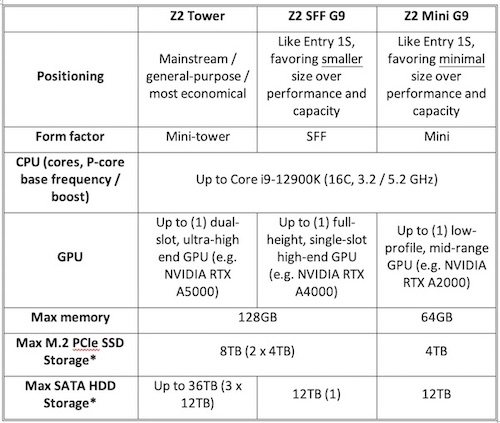 So yes, features and capacities decline relatively speaking, as one would expect, but the mini’s range is impressive. And that’s what makes the Z2 Mini an intriguing option — for the majority of CAD users, the compromises in capacities and features are modest to moot, as its feature and performance range covers a wide swath of today’s CAD user base.

Performance Limited, but to What Degree?

Features always matter, but ultimately, what trumps all for most CAD professionals is likely to be performance. Stepping down from a full size or mini tower, or even an SFF fixed workstation, at what points, if any, does a mini fall short?

To get a handle on the potential performance differences — at least a rough cut — I benchmarked the Z2 Mini versus its Z2 tower, specifically against the previous generation (less than one year old) tower. I took a look at both CPU- and GPU-focused performance, for the former using SPEC’s SPECworkstation, Cinebench, and PassMark Performance Test, and for the latter relying on SPECViewperf 2020.

To emphasize, the intent of the performance analysis isn’t to compare apples with apples, but quite intentionally the opposite. With its size, the Z2 Mini offers appeal its sibling mini-tower or even SFF can’t match. The question then, is what would a CAD professional give up, if anything, to gain that obvious ergonomic advantage. 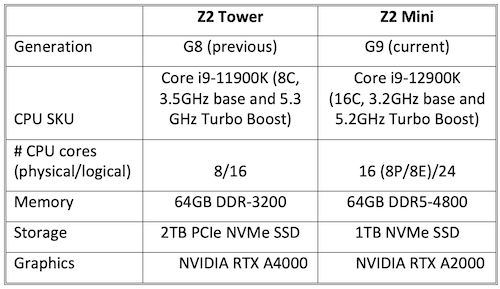 Intentionally not comparing apples to apples: the performance-dictating specs for our Z2 Mini versus previous generation Z2 tower. Data sources: HP and AMD.

On multi-threaded (MT) professional and CAD-oriented workloads, the Z2 Mini (as outfitted) crushed the previous generation Z2 tower, by about 70% on average. The result shouldn’t be shocking, as the Z2 Mini sports that top-end 16C (8P+8E) Alder Lake 12th Generation Core i9-12900K, compared to the previous 8C 11th Generation Core i9-11900K. But still, that’s validation the HP’s engineers successfully addressed the daunting cooling challenge with an approach to keep the mini’s extremely compact interior from getting too hot and requiring the CPU to throttle back. SPECworkstation runs for a long time (hours), and with its MT workloads should uncover any throttling based on a system and silicon exceeding thermal limits. 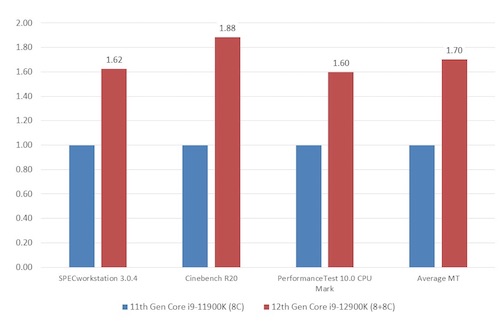 As many CAD users know very well, single-threaded (1T) performance still matters, and to some it matters the most. The Z2 Mini and Core i9-12900K impress on 1T workloads as well, almost 20% faster on average than the previous generation tower and CPU. 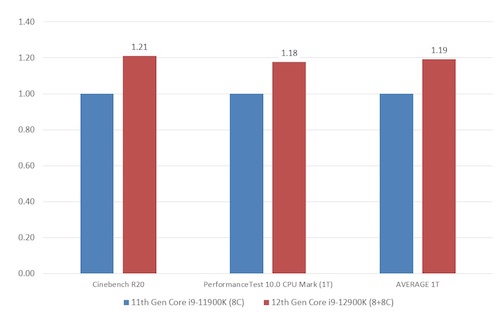 No Getting Around the Superior Performance of a Bigger, Higher-wattage GPU

With the same top-end CPU as its bigger siblings, the SFF and tower, along with clearly effective cooling by HP, the Z2 Mini delivers on both MT and 1T performance relative to its tower predecessor. And given that these benchmarks shouldn’t be affected by a memory limit of 64GB, I can further assume on these benchmarks (though not confirm through testing) that the Z2 Mini’s CPU scores would not vary much, if at all, from a G9 tower or SFF model with the same Core i9-12900K. 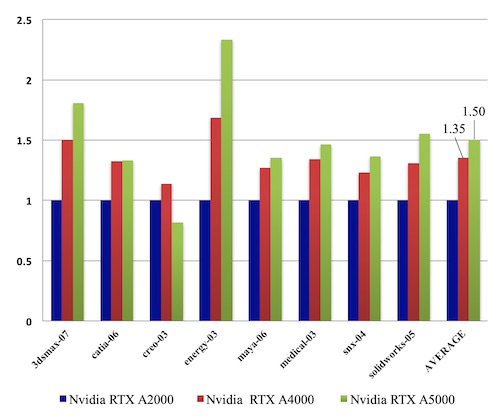 A Compelling Package with Modest Tradeoffs

So, as one would assume, a mini can’t do everything a larger machine can with its more ample volume and watts. And, as a result, it can’t deliver the top-end performance of its siblings. But, of course, just because a bigger device can offer more performance at capacity in its top-end configuration doesn’t mean that that incremental capability is a must-have for all CAD users. Looking at the full spectrum of today’s computing devices, it would be ludicrous to suggest professionals think about using a supercomputer, just because it offers more performance, just as it would be crazy to suggest a smartphone. So clearly, we’re already accepting that there’s some compromise of size and capabilities that make most sense for CAD pros, and that’s the middle ground populated by workstations, with choices from laptops to full-size desktop towers. And, given that, who’s to say where your sweet spot in that workstation range is but you, based on your usage, datasets, and workflow?

More than a handful are already convinced that a mobile workstation can deliver enough performance for their workflows, and pushing up in size and watts isn’t worth it. Likewise, the rapid adoption of SFF-fixed machines is evidence many long-time users of traditional towers have concluded that stepping down and accepting a mild loss in capacity is no problem for them, so why not save the space? Mini workstations like HP’s Z2 Mini (and Lenovo’s ThinkStation P300 Tiny series) simply provide a product hitting another performance/size point in the spectrum — and based on its top-end specs and benchmarks, it’s a compelling one at that. CPU performance is top-notch, and the percentage of CAD users that won’t be satisfied by 64GB, 12TB of PCIe SSD, and a mid-range RTX A2000 is relatively small.

The bottom line? A smaller workstation can’t deliver the top-end performance and functionality that a bigger one theoretically can, but that only matters if the smaller machine falls short of what you need. And, as supported by sales numbers,  SFF desktops and mobile workstation mobiles clearly aren’t falling short for most CAD users. Yes, there are plenty of users that need or simply prefer the familiar capacity, expandability, and ultimate performance offered by the traditional tower. But with the pace of engineering in both silicon and systems, as evidenced by Intel’s Alder Lake CPUs and HP’s Z2 Mini, there are many more who will find that the mini — with its friendly, compact ergonomics — will provide all they need.