Last week, NVIDIA held its annual GTC trade show, highlighting the company’s current major computing initiatives. This year, one such initiative is Omniverse a virtual, cloud-centric 3D design environment that we covered earlier this week. Jensen Huang, NVIDIA founder and CEO positioned Omniverse front and center in his opening keynote, built around a host of NVIDIA products, most notably including its RTX line of GPUs. That line just got a little broader, with the company announcing several new Ampere-generation RTX GPUs, including two for workstation clients, two for the datacenter and several more for mobile workstations.

Introduced in Volta, enhanced in Turing, and dialed up again in the most recent Ampere generation, RTX combines more conventional programmable GPU shader architecture with two novel hardware acceleration units, RT cores and Tensor cores. The former specifically accelerates the compute and memory intensive process of tracing light rays through a 3D scene, while the latter provides generalized acceleration for machine learning applications. One of those AI applications, interestingly, also accelerates the process of resolving ray-traced images (via the final “de-noising” process). Combined, the three hardware engines dramatically improve rendering performance, in the process enabling more frequent and pervasive use of rendering, in both gaming and professional 3D spaces like CAD.

NVIDIA’s showcase launch vehicle for Ampere was last year’s RTX A6000, an introduction of the company’s new RTX brand of graphics card. At this year’s GTC, the company added two high-end siblings for the A6000, the RTX A5000 and RTX A4000. To set expectations for the new family’s rendering performance, NVIDIA pitched the claim that, in general, RTX customers are finding that Ampere-generation products deliver what the previous generation could, but one notch down in the product line. That is, what a Turing-class Quadro RTX 5000 could do, an Ampere-class RTX A4000 now matches. Given that an RTX A4000 is less than half the price of an A5000, Ampere would appear to pack a hefty price-performance punch.

As has become typical in its GPU rollouts, NVIDIA announced two datacenter-focused sister versions in conjunction with the client-side RTX A-class products, the A10 (no RTX prefix) and the A16. Based also on Ampere silicon but tailored for server environments, the A10 and A16 don’t share exactly the same specs as any of the RTX A-series SKUs, but similar. 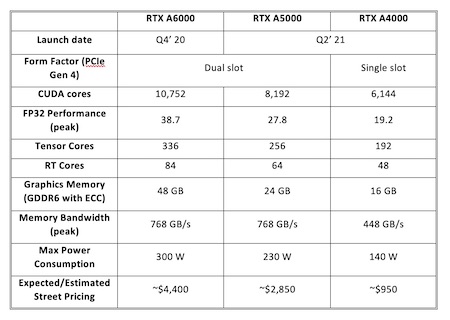 NVIDIA’s ballpark assessment essentially tracks my own benchmarking of the first professional Ampere GPU, the RTX A6000 I reviewed in February of this year. Rendering a GPU-accelerated scene with Otoy’s OctaneRender on both the A6000 and previous-generation RTX 6000, my results showed the former at around 2.5X the throughput of the latter.

None of the trio can be described as mainstream professional GPUs, based strictly on pricing. At eventual estimated street prices of around $4,400 and $2,850, the RTX A6000 and RTX A5000 are both beyond the budget for the vast majority, as well as overkill for most (though not all) CAD-relevant use. NVIDIA is keenly aware of the far lower volume at these price levels, and bears in mind that while volume sales may be fewer relatively speaking, when factoring revenue and margins, products in these tiers have historically paid off well.

The RTX A4000 is different, though. I expect the RTX A4000 pricing to match where previous 4000-class products have been, a nudge below the $1K level, putting it in reach of the upper end of the strongest part of the CAD market. For perspective, I estimate NVIDIA sells in the vicinity of 400–500K of its 4000-class GPUs every year, with probably a third going to CAD-related markets. While they might not be selling millions of units, they have a strong following and most importantly, there will most likely be another RTX A-class GPU to launch, as Ampere will eventually trickle down to lower price points further in the coming quarters. 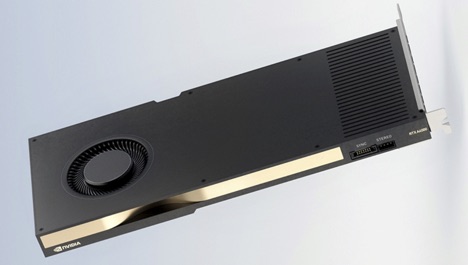 What’s In a Name?

NVIDIA’s Ampere upgrade to its workstation-focused GPU line didn’t end with add-in card products for fixed/desktop machines. Rather, the company also announced the imminent availability of four new mobile workstation GPUs, also derived from Ampere silicon:  the high-end RTX A5000 with 16GB and RTX A4000 (8GB), along with mid-range RTX A3000 (6GB) and RTX A2000 (4GB). Expect all major OEMs — Dell, Lenovo, and HP — along with virtually all smaller workstation providers to pick up some or all of these new RTX A-class GPUs to ship as options within the coming weeks.

The mobile GPU branding, which shares the same model names as the fixed models but not only come with different specifications, is confusing because they correlate to different product tiers. For example, the laptop RTX A5000 specs essentially match the fixed RTX A4000 (not counting power, which of course is adjusted to comply with the tighter consumption and thermal constraints of a mobile platform). Be aware, as you dig into your next buy.

Pushing further down the mobile GPU product line, NVIDIA filled out its least expensive tiers with two new GPUs, the T1200 and T600 based Ampere’s predecessor Turing. Filling the lower tiers with Turing would indicate that either Ampere silicon isn’t quite cost-effective yet for such thin-margin price points, or NVIDIA would prefer not to cannibalize higher end Ampere GPUs, or both.

A far cry from the graphics controller vendor of the 90’s and 00’s, NVIDIA commands a breadth of business today that can make its traditional GPU products almost seem like an afterthought, instead focusing attention on major growth opportunities in the machine-learning, datacenter, and automotive markets. But its GPU chips remain the backbone supporting virtually all those initiatives, and products such as the RTX GPUs in gaming, CAD, and other professional applications still make up the lion’s share of revenue. Now, with moving to Ampere, and judging both on paper and in testing, the new RTX A-series should only further cement NVIDIA’s leadership position in CAD computing.