What’s In a Name? Little to No Difference in a Processor’s SKU Can Translate to a Big Impact on Performance, Part 2

Herrera on Hardware: High-power components like GPUs often have performance reined in to fit in more compact form factors. . . and you may not notice from the brand and SKU.


In our previous column, we introduced a challenge facing workstation vendors and buyers of emerging class of both mobile models as well as shrunken form factor fixed machines. The vendor needs to cram more components in a smaller space, ultimately (and to varying degrees) required to rein in performance to ensure tolerable heat dissipation and reliable operation. The buyer needs to understand the tradeoff in performance that must be made — particularly with respect to the CPU and GPU — when stepping down in system size. Worse, that buyer might have to navigate some murky branding, SKU numbers, and datasheet specs that make it difficult to discern the subtle-but-salient differences that dictate when — and to what degree — performance will degrade.

In Part 1, we focused our attention on the CPU, comparing models that look very similar on the outside, but will yield significantly different performance in the case of multi-threaded (MT) workloads. This month in Part 2, we’ll take a look at the GPU, which can present even more difficulty in discerning the performance tradeoffs across branding and SKUs.

Consider Nvidia’s dominant RTX line of add-in card GPUs fixed machines (e.g., deskside towers) and mobile GPU modules for mobile workstations. Lenovo’s ThinkStation P360 Ultra differentiates among sub-SFF fixed machines by offering the RTX A5000, which — by the literal reading of respective datasheets — is something a full tower can also claim, but not typical SFF workstations, which typically max out with an RTX A4000. It sounds great, and yes, that option is a legitimate feather in the cap for Lenovo and its Ultra. But, there’s some context that needs to be laid to understand what that difference actually means, and what it doesn’t.

That context stems from Lenovo’s sensible use of the lower-power mobile version for its Ultra fixed machine, as well as Nvidia’s current branding of its professional RTX GPU lines. Too small to house a conventional add-in card, the Ultra — like other sub-SFF models — instead opts for the mobile version. And that leads to the non-intuitive realization that an RTX A5000 for fixed workstations is not the same as an RTX A5000 for mobile applications, as a look at the basic specs below illustrates. The memory size and bandwidth, number of available processing cores, and aggregate FLOPS rate are all notably higher on the add-in card version.

Is Nvidia short-changing you on your mobile version of the RTX A5000? Well, one could certainly argue the point from the perspective of branding and SKU numbering. It’s worth noting that while the company has always used overlapping 1000s SKUs (e.g ., 4000, 5000) to designate relative performance tiers for both their fixed add-in card line and their mobile module lines, the company has muddied the waters further in the days since it axed the Quadro brand in favor of the simple RTX. With Quadro, Nvidia would make the line clear between fixed and mobile with an “-M” suffix, but it abandoned that designation with RTX, effectively duplicating the same SKU in both lines.

But outside of ambiguous branding, no, Nvidia’s stingier spec’d RTX 5000 for mobiles is constrained not marketing but by physics. It’s the same story for the GPU as the CPU: dial up performance, and power consumption follows, often non-linearly, and the more power a device consumes, the hotter it gets. To constrain maximum chip temperatures then, maximum power must be reined in as well. Nvidia’s specs bear that out, as the RTX 5000 add-in card has a “design power” of 230 W, while the mobile version is noted as 80 – 165 W, similar to the RTX A4000 add-in card’s 140 W power. (Design power essentially translates to the power threshold at which the device can run, and the system can reliably mitigate the heat produced at that level).

As this column often notes, of course, datasheet specifications — mostly peak measures — don’t directly correlate to the throughput you’ll see. The more amply spec’d component offers the potential of higher performance, but whether it can — and to what degree it can — depends on the type of workloads it’s running, along with how well the rest of the system can keep up. SPECviewperf 2020 arguably provides the best unbiased perspective (albeit never perfect) of the relative capabilities each can potentially deliver. Most relevant to CAD users are the scores on SPEC Viewperf 2020’s viewsets gleaned from the popular applications Solidworks, CATIA, Creo, and 3dsmax. 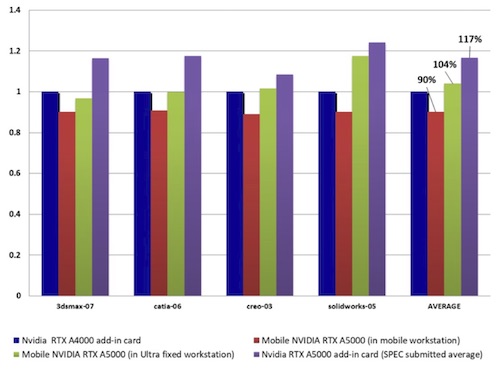 Note also that I threw in another set of test results on a mobile RTX A5000, but this one housed in a mobile workstation (scores averaged among three models submitted to SPEC, two from Lenovo and one from Dell). That RTX A5000 actually fell 10% short of the RTX A4000 add-in card, illustrating again how the mobile workstation’s tight power/thermal constraints — tighter even than the sub-SFF’s Ultra — require even further dialing back of performance.

The Impact of Tradeoffs are Crucial to Moot, Depending on Your Specific Workloads and Workflow

As the analysis and testing bears out, a little difference in a processor brand and SKU — or in the case of the RTX A5000, no difference at all — can translate to a substantial difference in performance. . . and something worth paying close attention to when configuring your next workstation. I’d prefer clearer distinction between products brands and SKUs when the performance differences are that significant, but regardless, the exercise here more importantly provides more evidence of the tradeoff buyers need to be aware of when looking to try out a more compact form factor.

A smaller workstation’s maximum potential performance will fall short of a bigger machine’s, all else equal. But worth emphasizing, that fact only matters if the smaller one falls short of what you need it to achieve. For most, something like HP’s Mini and Lenovo’s Ultra (and Dell’s Compact, though not tested) will deliver enough of what mainstream CAD workflows deman. The choices in fixed workstation have never been more plentiful or broad in range, with the majority well within consideration for most professionals looking to swap their traditional tower for a workstation that can actually fulfill the expectations of a “desktop.”