What’s In a Name? Little to No Difference in a Processor’s SKU Can Translate to a Big Impact on Performance, Part 1


In recent months, this column has fixed its attention often on the evolving make-up of the fixed workstation. It’s a justifiable focus, as the platform has experienced a particularly rapid pace of innovation and differentiation in the past few years — most notably manifested in the proliferation of new, shrunken form factors. Though often equated with the pseudonym of “desktop,” the fixed workstation has in reality sat most often desk-side in a traditional tower chassis. A decade ago, a machine that truly deserved the desktop designation, the Small Form Factor (SFF) workstations, began its rise to prominence, now comparable in sales volume to the traditional tower.

The last few years, however, have seen the workstation options shrink further, with the introduction of sub-SFF models enticing CAD users looking to streamline their desks and willing to give up some degree of performance and capacity. With its Z2 Mini, HP was the most aggressive of the big three (Dell, HP, and Lenovo) to drive the downsizing trend. Lenovo jumped on board as well, even out-shrinking the Mini with its own Tiny, and recently launching the Ultra workstation, fitting in size between the Tiny and a conventional SFF machine. And Dell responded with the Compact, comparable to the Ultra in size, and so far steering clear of marketing something in the ultra-small neighborhood of a Tiny. The graph below charts the chassis volumes for these new sub-SFF workstations (normalized to the size of a typical deskside tower, HP’s Z2). Keep in mind that for the Ultra and smaller, an external power brick is required, one far larger than the AC adapter of an SFF or tower machine. 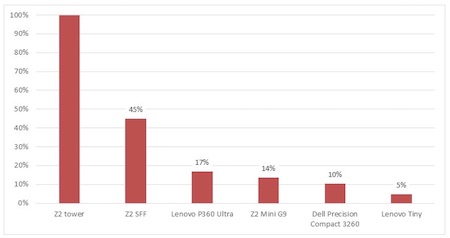 How some of DHL’s sub-SFF fixed workstations stack up to conventional tower and SFF volume, normalized to HP’s Z2 tower. Data source: HP, Dell and Lenovo. Click image to enlarge.

This column’s covered the Mini and SFF workstations in recent months, with one common thread clear: there’s an unavoidable tradeoff between size, capacity and performance. The obvious one? Shrink the volume and maximum capacity declines with it, as there’s simply less space to stuff components. But as discussed as well in those articles, the max capacity (e.g., memory and storage) of even the Mini is surprisingly ample, beyond what most CAD users require. Rather, the more significant tradeoff than size and capacity is between size and performance. Higher performance means more watts, and more watts means more heat, heat that a bigger chassis can more efficiently dissipate. Ultimately, smaller machines are more likely to have performance throttled back to avoid failures from exceeding thermal limits.

In the next two columns, we'll look at the two primary workstation processors primarily responsible for the level of visual computing performance CAD workflows ultimately achieve — the CPU and the GPU — and how their specifications vary to operate within the thermal constraints of the more densely packed sub-SFF models. In addition, we’ll look at how seemingly subtle differences in those SKUs — or even no difference whatsoever — can have substantial impacts on achievable throughput for typical CAD workloads.

Consider two of the premium SKUs from Intel’s most recent 12th Gen Core family, a product line that will dominate workstation sales in the coming months (though will have its own 13th Gen Core successor ramping in workstations shortly). The Core i9-12900K appears as the top end CPU option currently for most single-socket, mainstream deskside towers and SFF workstations, but a sub-SFF model like Lenovo’s Ultra sensibly offers the 12900 as its most premium option. The table below contrasts the most salient metrics for the 12900 vs. 12900K, a mere one letter distinction in SKUs. 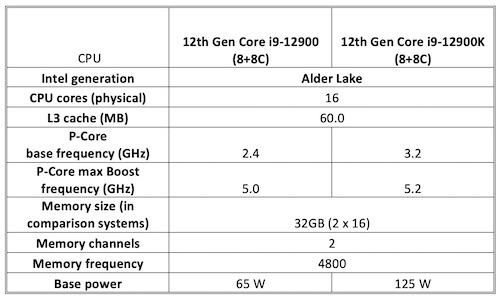 Now, if you were to quickly glean the highlights from their respective datasheets, you might not notice the most salient difference between the two SKUs: the P-core base frequency. Intel’s marketing collateral will summarize clock specs for the two models with “Up to 5.0 GHz” (the 12900) and “Up to 5.2 GHz” (the 12900K). No big difference, right? On the surface, then, few would see that difference as a critical criterion in their selection of the CPU, and thereby not critical in the selection of workstation form factor.

But as we’ve covered several times in this column, the P-Core boost frequency — the “up to” metric referenced above — isn’t a guaranteed, sustainable rate. The CPU can often sustain that rate for a single-thread (1T) workload, as the higher power consumption is constrained to just one core. Run all cores hard in a multi-threaded (MT) workload, however, and the clock speed will drop, often down to the base rate,  where the 12900K can run 33% faster than the 12900.

Given those respective differences in boost and base clocks, it would make sense to expect that the two should see comparable 1T performance, but the 12900K should deliver substantially higher MT throughput, all else equal or close to equal in the rest of the system. To validate that expectation, I ran Cinebench and SPEC’s SPECworkstation benchmark on both the 12900 and 12900K, as well as a Core i7-12700K, a SKU with similar speeds as the 12900K but fewer cores.

First, let’s look at the 1T score running popular rendering benchmark Cinebench (R20). As anticipated, both the 12900 and 12900K delivered very similar scores, a level not surprisingly also essentially matched by the 12700K. Clearly, each CPU has one P-Core running at max Turbo rates, and since activity is limited to only one core, heat is manageable and the similar, Turbo rate can be maintained for a long period, if not indefinitely. 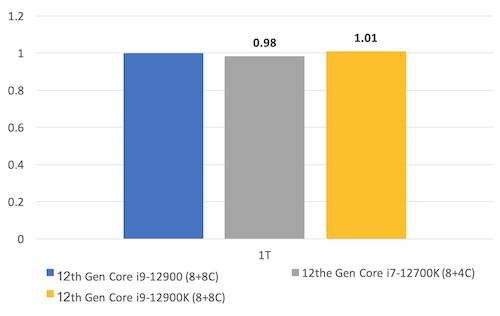 But if our read of the relative clock specifications is correct, the same story shouldn’t apply for MT performance. For MT execution, the thermal limits are much more likely to be reached with all cores heavily loaded, and each CPU will more likely fall back to (or closer to) its base rate. Sure enough, that’s precisely what the testing shows, as results for both SPECworkstation and  Cinebench (with full threading enabled) show the 12900K substantially higher than the 12900, by 24% and 16% respectively. Interestingly, even the fewer-core’d 12700K we tossed in the mix was able to outperform the 12900, again behavior we can attribute to the former’s higher base clock rate. 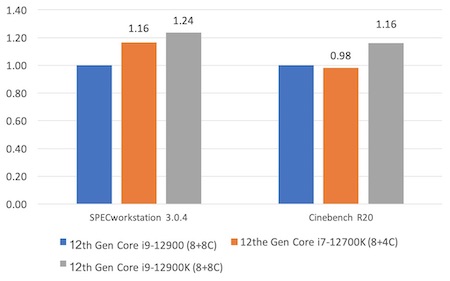 MT benchmark scores for Cinebench R20, normalized to the i9-12900 (for similarly configured systems). Click image to enlarge.

Rush to configure a new CAD workstation by seeing CPU SKUs with bigger numbers (e.g.,  i9 vs. i7 and 12900 vs. 12700), with the same number of cores and very comparable “Up to” clock frequency, and you might end up with a workstation significantly slower on compute-intensive MT workloads like rendering and simulations. Of course, you may be be willing to accept that tradeoff — say to get your machine down to one of these emerging shrunken form factors or to reduce cost — but it should be a conscious build choice, not one that slipped through the cracks due to ever-so-subtle differences in brands, SKUs and line-item specs.

In the next column, we’ll look at similar issues and tradeoffs in GPUs, which in at least some cases, share identical names but deliver significant differences in performance. Stay tuned!