Editor's note: This article was originally published in the Manufacturing edition of the Summer 2010 issue of Cadalyst. You may also read the AEC-focused version of this article.

I'll go ahead and state it right up front: Autodesk Inventor 2011 is a very good upgrade of an already good product. Being the flagship 3D mechanical CAD product from Autodesk, Inventor typically rolls out a lot of new features each year. This year is no exception, although ease of use really has been achieved in this release. I know, I know, every software vendor says its new products are easier to use, but this version actually delivers — while also adding lots of meaty features. Let's dive in. 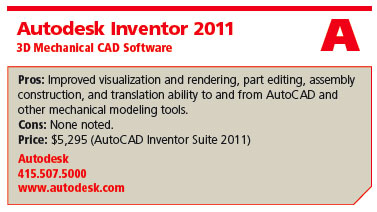 The user interface (UI) for Inventor 2011 is different from prior versions, yet it remains familiar. The main screen still features an assembly browser along the left-hand side, the view cube and view control tools along the right-hand side, and the quick-access toolbar and ribbon controls along the top. The big difference you'll notice right away is that your model now displays as a rendered design preview that updates in real time. New users may take this graphically rich environment for granted, but veterans who always had to click back and forth between wireframe and rendered levels of graphics will appreciate the better visualization immediately.

Another, more subtle UI upgrade is the ability to see the feature type when you select a feature of the assembly, along with a Help display that gives contextual information about commands relative to that feature. As is the trend with most CAD tools these days, the software has more and more context-sensitive guidance via right-clicking, and the new heads-up display (HUD) puts editable parameters on the screen, right where the mouse can make input an almost click-free procedure. 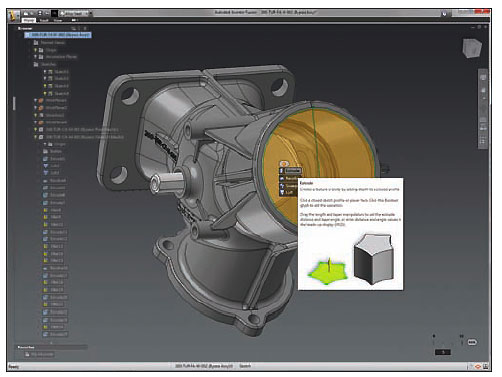 The traditional Inventor UI gets a boost with new real-time rendered design preview and a Help display that gives contextual information about commands relative to your selected feature.

One of the problems with designing parts using a mechanical modeling tool is that you have to understand the part — and how the software represents the part. Ultimately, you can spend a lot of time thinking about the software rather than the part you're trying to design. Direct manipulation gets around this problem by allowing you to select the feature or face of the part that you'd like to edit and accessing the input boxes you need to alter that part. Rather than having to trudge through a part's feature tree randomly selecting extrusion features and visually inspecting the model to see if you've found the right extrusion, you can just choose the extrusion you want and edit it directly. 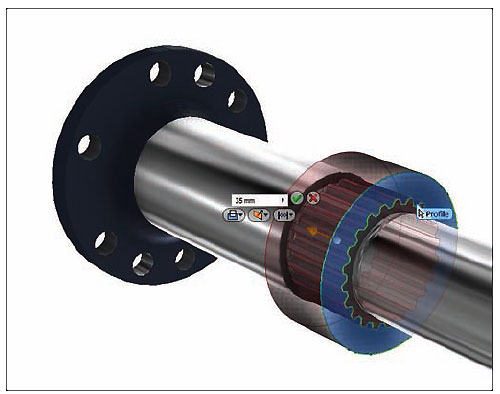 Direct manipulation in Inventor 2011 means you simply click on a feature to have menus of all the required features, vectors, and parameters automatically pop open so you can edit the part without having to search through the part or assembly browser for the information.


Before anything happens in 3D, a design typically gets sketched in 2D; therefore, ease of sketching becomes a productivity-gating feature. AutoCAD users will rejoice in using direct input in Inventor's 2D sketch mode that feels familiar, rather than having to learn a new 2D CAD environment.

Direct manipulation and input makes it easier for new users to learn Inventor — I remember being confused at first simply due to interface issues — and saves clicks and picks for experienced users. This software is easier to learn, easier to use, and faster. It's hard to argue with those results, no matter your experience level.

I'd always thought orienting parts into an assembly was too complicated in Inventor. In the past, parts had to be manipulated together by constraining geometry, which required a lot of thought about geometric construction and a pretty thorough understanding of the science behind how constraints actually work. No more.

In Inventor 2011, you can use the Assembly Snap tool to put parts together using intuitively located points to constrain them to other objects; it's very similar to using AutoCAD's Object Snap feature. So instead of having to constrain and shaft and bear together using planar face and concentric constraints, you simply use the inherently selectable centering points of the geometry to place the objects together, then Inventor applies the logic needed to make the assembly behave in the background. This is my favorite new feature in this release.

Frame assemblies have been upgraded with Frame Analysis, which is integrated into the Frame Generator tool. Although frame design has been good in the past, with this release you can apply loads and know how the frame will perform as you design it — allowing you to increase cross sections or reduce unsupported spans to bring your frames into compliance.

Many Autodesk 2011 version CAD products now use the unified Autodesk Material Library to make material application more consistent across various Autodesk software tools. The more comprehensive materials library allows you to find the appropriate materials (rather than editing them yourself), so designs look better on screen and appear the same way in other Autodesk software tools if you export your Inventor models later. After materials are specified, you can tweak lighting scenarios easily using the Lighting Styles dialog box to obtain nearly photorealistic results on screen with no outboard rendering software required. 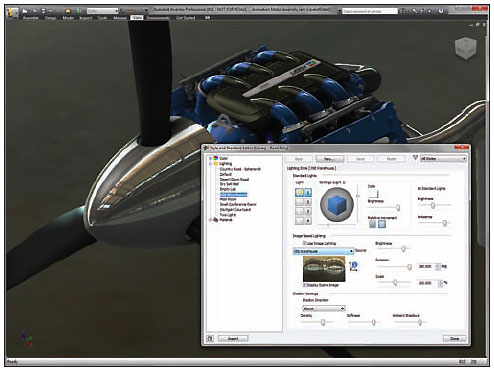 Of the numerous other new features introduced in Inventor 2011, I'll mention just a few that jumped out at me during my review.

For those who would like to explore some of the features that I didn't have room to discuss in this brief review, Autodesk offers a series of tutorial webcasts and a wiki with a lot of information about Inventor 2011 and its new features.

Mechanical modeling tools such as Inventor 2011 exist in a fiercely competitive market where frequent updates can create complex, feature-packed interfaces that are difficult for new users to fathom. What gets my attention about Inventor 2011 is that Autodesk has been able to add a substantial palette of new features while actually making the program easier to use, for beginners and veterans alike. If you design modest- to complex-level parts, deal with assemblies, and want to control the visualization of your creations, you'll want this upgrade. Highly Recommended.