The most significant new items in Autodesk Inventor Professional 2013 are also new in AutoCAD 2013, which is part of Autodesk's master plan to have all its programs look, feel, and operate as similarly as possible. In this review, I'll begin and end with the two updates that will probably attract the most attention, and fill the space in between with some of the less splashy but still noteworthy changes.

It's hard to miss the first new feature, because the new Welcome screen is all you see when you launch Inventor Professional 2013. 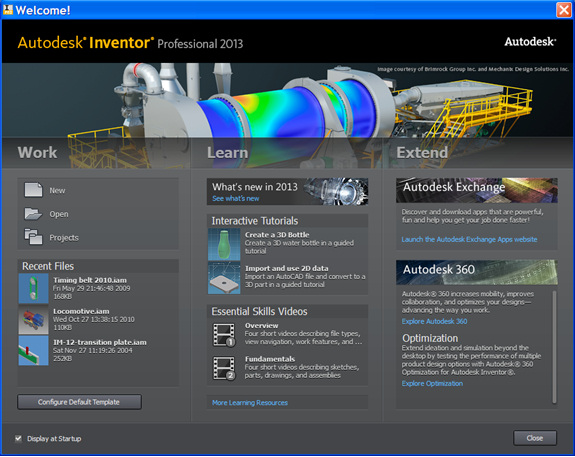 Do you feel welcome? The new Welcome screen in Inventor Professional 2013 mimics that of AutoCAD 2013.

The Welcome screen is divided into three sections: Work, Learn, and Extend.

Work. This section gives quick access to buttons that create new files, open existing files, and let you customize the default template files. This latter button brings up a small dialog box with two sets of radio buttons that let you set measurement units and drawing standards for new files. This can now be done at any time — not just while you are installing the software.

Learn. This center section contains links to a series of interactive tutorials, including Getting Started and What's New. There is extensive user support and training in a variety of formats and from a variety of sources, including local user groups, Autodesk University, and possibly your dealer. Autodesk maintains a discussion forum that is actively monitored by Autodesk employees, and the new searchable online Wiki Help functionality means that help is constantly being updated with user input. There are also several independent chat forums.

Extend. The final panel lets you connect to Autodesk Exchange, where you can find a number of add-on apps. To quote the Welcome screen, these apps are "powerful, fun, and help you get your job done faster!" Many are third-party products; some are free.

This panel also lets you access Autodesk 360, which is Autodesk's brand name for a number of cloud-based services. (More on this later.)

You can turn off the Welcome screen so it doesn't display at start-up (simply uncheck the box in the lower left corner), and you can access it at any time (from the Get Started tab of the ribbon).

The next thing you see after you pass the Welcome screen is also new: the Create New File dialog box is completely re­designed. Template files are now organized by type, and if you single-click on one, the dialog box shows a generic preview of the type of file it produces. 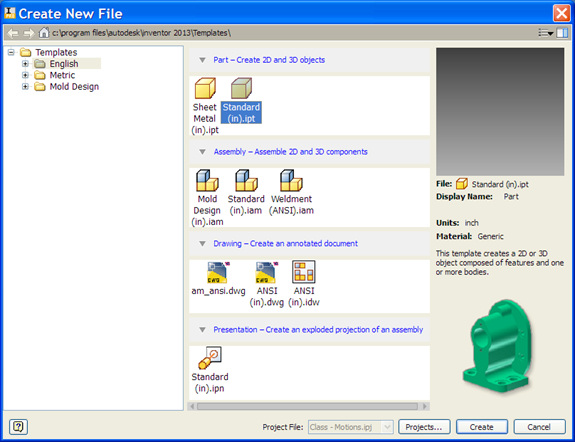 The Create New File dialog box has been completely revamped, and template files are now organized by type.

Pick an Item, Any Item

Inventor Professional 2013 includes literally dozens of new features. I don't have space to cover them all here, so I'll focus on those that caught my eye.

Trim a little out of the center, please.

That hits some of the high points of the new features in Autodesk Inventor Professional 2013. Now, as promised (or threatened) earlier, I'll finish off with the second major new feature.

Autodesk has opened up a whole sky full of cloud services in conjunction with the 2013 product line. Some services support existing products; others are totally new apps. Some are free to all users; others require you to be a subscription member. Some of the services relevant to Inventor include:

Storage. You can save several gigabytes of data to an Autodesk cloud server, where security and backups are taken care of for you. You can also access these files from any place in the world that has Internet access.

Collaboration. You can allow others to access the files that you saved or copied to the cloud server.

Analysis. Autodesk Inventor Pro 2013, as part of Autodesk Design and Creation Suites (Premium and Ultimate), lets subscription members use the cloud servers to perform compute-intensive operations such as Inventor Optimization (stress analysis). Operations that can take hours or even days on a console machine can be performed in minutes on the cloud.

All in all, Autodesk continues to find ways to significantly improve the functionality of Inventor and related products. Highly Recommended.