Explore the Presentation File in Inventor 2017

Autodesk has made some major updates to the Presentation file in Autodesk Inventor 2017. In this tutorial, I will cover how to properly create an exploded view of an assembly for users who have never worked with a presentation file, while highlighting new features for 2017 for more experienced users. We will then explore how to create an animation from that exploded assembly.

Let’s start by taking a look at the layout of a presentation file. To open a presentation file, we must select the IPN option from the Create New File dialog box and click Create. I will be working with the standard IPN, but you will also have the option of a metric IPN file under metric templates if needed. Once open, users that have experience with IPN files will notice an immediate difference. Two new features that should stand out right away are the snapshot view along the left and the storyboard along the bottom of the screen.

New for 2017: The snapshot view will allow users to store component positions, visibility, opacity, and camera settings. Snapshots can either be linked or independent of the storyboard timeline.

New for 2017: The Storyboard panel lists all storyboards saved in the presentation file. Storyboards include animations of the model and camera, and can store settings for individual snapshot views or a sequence of snapshot views in editable form. The Storyboard can be undocked and moved anywhere there is screen real estate available or docked to another monitor. It can also be expanded and collapsed. 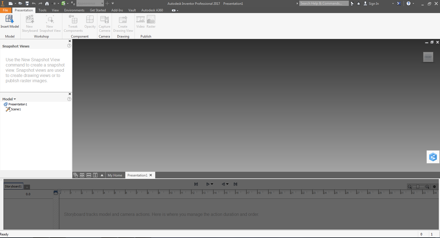 When the initial IPN file is open, there is only going to be one command that is active: Insert Model. Once Insert Model is active, we must select the assembly that we want to use in the IPN scene. When selecting the assembly, users will have the option to use a design view, positional representation, or level of detail if one has been set up and saved in the selected assembly. You will also have the option to make the selected view Associative to the presentation file, which would propagate the edits from the assembly to the presentations scene. Once the file is selected and inserted, the rest of the commands will become active. 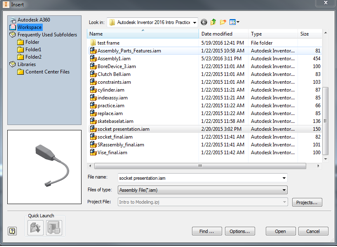 Now that the file has been placed, we can start to create our exploded scene.

New for 2017: Before I start to make any tweaks to my assembly, I am going to take a snapshot to save a view of the finished assembly. To do this, we want to first orient the position of the assembly to our liking, then click on New Snapshot View. Inventor will save an image into the snapshot box at that position.

New for 2017: Once the part is selected, it will highlight blue and display a USC that is aligned with the assembly document's USC. To change the positioning of the USC, activate the Locate command in the mini-toolbar and select a new position on the part to redefine.

Once the USC is positioned correctly, you can add or remove parts by holding Ctrl or Shift and selecting the parts. If multiple parts are added at one time, they will be grouped together. The Tweak Component command will allow you to either move or rotate the part, which will be defined at the top of the mini-toolbar. The option that is blue is the one that is active, as shown in the image above. In addition, at the bottom of the toolbar you will notice an option called Duration, set at 2.5 seconds. The duration is how much time that part will move in an animation over the given distance we are about to set. To move the part, click on the UCS and drag the direction needed. Once the part begins to move a small box will appear where you can enter an exact distance needed and press Enter or click the green checkmark to finish.

At the bottom of the screen in the storyboard, the part that was selected to move was added and a blue bar was added to the right of the name shows a duration of 2.5 seconds. In the image below you will also notice that I added another snapshot of the assembly to save the new image. There is a blue marker in the lower right corner in the image and that same marker in the timeline in the storyboard. That marker indicates that the snapshot is linked to the storyboard. If the snapshot is selected, the marker will turn blue.

I will now repeat the steps of activating the Tweak command, placing the UCS, and moving the part. To save time you can enter the distance, then click the next part that you want to move instead of pressing Enter or selecting the checkmark. Selecting the next part will replace the UCS without exiting the command. I will repeat these steps till the exploded scene is set up the way I want. 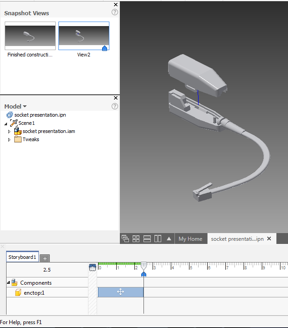 Trails are the visible representation of the tweak paths, and will display whether using the move or rotate options. The trails are generated at the time the tweak action is recorded and can be visible immediately. There will be times that a trail will not be located where you would like it to be. The trails are located by the center of gravity of a part. There is an option to add and remove trails within the mini-toolbar next to the All Components icon.

In this example, I added a trail to the back of the part. Once added, I moved the part the direction at the desired distance. I then selected the Remove Trail icon and selected the magenta trail that I wanted removed, as shown below. 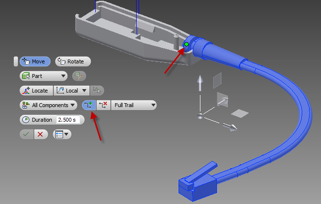 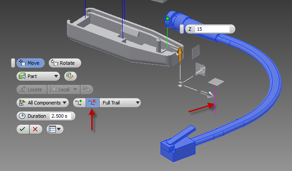 New for 2017: We are now going to add cameras to the IPN file for the animation. Inventor IPN now has the ability to create an animation where both the camera and the parts are in motion simultaneously. (This is one feature I have wanted Autodesk to add for a very long time!)

To place a camera, adjust your graphics window to the needed location, position the playhead at the point where you want the camera position to occur in the timeline and select Capture Camera from the ribbon or the right click wheel. If you do not like the default position of a camera at the start of the animation, move the playhead to the beginning and select capture camera. You will not see a camera position populate to the storyboard when a camera is set at 0 seconds. When you initially place a camera, the timeline will show a duration on 2.5 seconds. The durations of a camera movement can be changed by dragging that camera box shorter or longer. 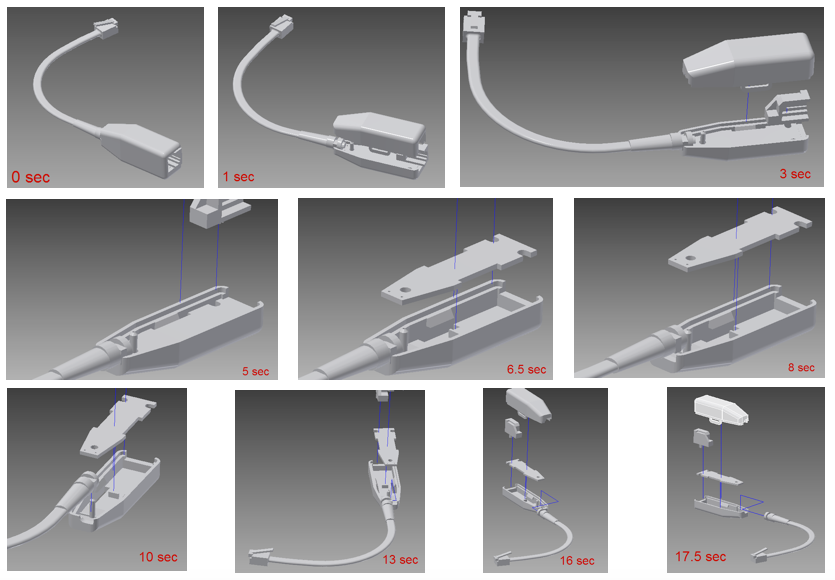 New for 2017: We now have the ability to control a part’s opacity and visibility during the animation in a presentation file. Setting the opacity for a part is very similar to the way we set a camera for the animation. We will once again set the playhead to the desired time position, but then select the component to change opacity and select opacity from the ribbon or right click wheel.

When active in the command, you can drag the slider to adjust the opacity or type an exact value. Once finished, an instant opacity will be placed to the storyboard. Users will have the option to adjust the duration of the opacity by dragging in the opacity symbol in the timeline.

New for 2017: Now that we are finished with setting up the tweaks and our camera views, we can now publish a video to record the animation. To do this we must select the video icon in the Publish panel of the ribbon. Once the command is activated, the Publish to Video dialog box will open. Here users will have the option to create a video for all the storyboards that are in this presentation file, or just the active one. Users will also be able to adjust the video resolution, file name, save location, and video output file of either a WMV or AVI. Once finished with the settings, click OK; Inventor will start the recording and display a dialog box that says the video was completed.

About the Author: Jason Swiercz