IMAGINiT Tricks Tutorial: Changes may be inevitable, but Layout Design can help you make modifications quickly.

Form over function has been an adage in design forever. In the past, the shape and characteristic features of a part/assembly were of the utmost importance, because corrections and modifications were tedious tasks. With the advent of the CAD revolution, it became possible to accomplish modifications — and even complete reworks — in hours rather than days. However, as designers we still try to avoid major edits as much as possible, particularly when it comes to large, complex assemblies.

Modifications, however, are sometimes inevitable, especially if we haven't established the function of the assembly completely. This causes many hours of rework due to the fact that we've designed good-looking parts that don't work together well. This is where having the function of the assembly nailed down initially can free the designer to create parts that not only look good, but also function properly.

Three-dimensional design is the new paradigm. It allows us to see the parts before they are made; however, the "coolness factor" sometimes overrides the need to create functional parts. This is why my proposal is a slight rework of that familiar adage to read function before form.

So how do we achieve this? We use a functionality within Autodesk Inventor called Layout Design. This is a form of skeletal modeling that utilizes simple 2D sketches to establish the function in the quickest way. Yes, 2D — and with the power of part-based conceptualization. This creates a very sophisticated setup which allows us to establish the functionality very quickly and efficiently. Let's take a look at how it's done.

In the image below, we have a part file (IPT). Within the file we've sketched out all the "parts" for a single-cylinder engine. The purpose of creating all the parts in a single sketch is for simplicity, and to get all of the pieces drawn up. Also notice that the "parts" are very simplistic; we don't want too much detail at this point because we are still figuring out the concept. We are, therefore, only concerned with the B-rep (Boundary Representation: how much space does it take up?) of each "part."

Our next step is to convert the sketches to something that can be recognized as individual "parts." This is done by creating blocks out of the sketch geometry. (Block creation is located on the Layout panel in Sketch.) 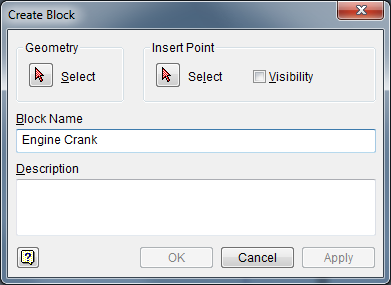 As we can see, all the sketches have now been grouped into blocks, and each can be viewed in the part history browser in its own folder.

The blocks are now ready to be "assembled" within the parts environment. We use standard 2D constraints to place them in the correct locations, similar to constraining 2D geometry.

The blocked geometry is positioned and tested to establish the functionality of all the "parts" in normal operation. At this point, we can tweak the "parts" to ensure that they are working correctly together.

Now that we are satisfied that the "assembly" is functioning correctly, we are ready to convert the concept into a true assembly. This is accomplished using the Layout panel in Parts mode. We select the Make Components button to activate the routine.

When we get the dialog box, we set up the name, template, location, and potentially the BOM structure in the dialog box. The most important task will be to select the sketch "components" (blocks) so as to create the conversion.

Next, we ensure that all the components have the correct name, as well as any parameters that we'd like to include. At this point we click OK, and Inventor starts creating the conversion. 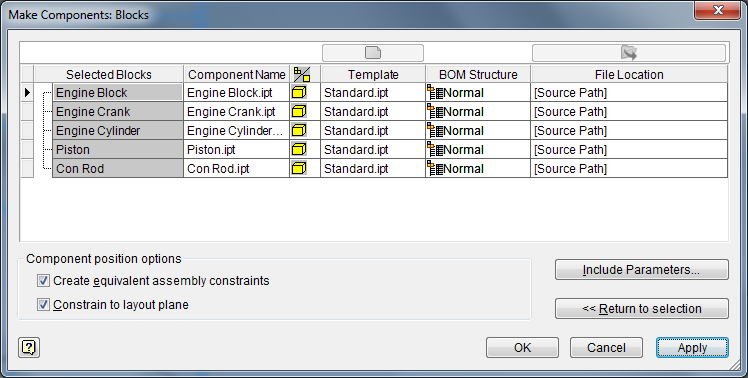 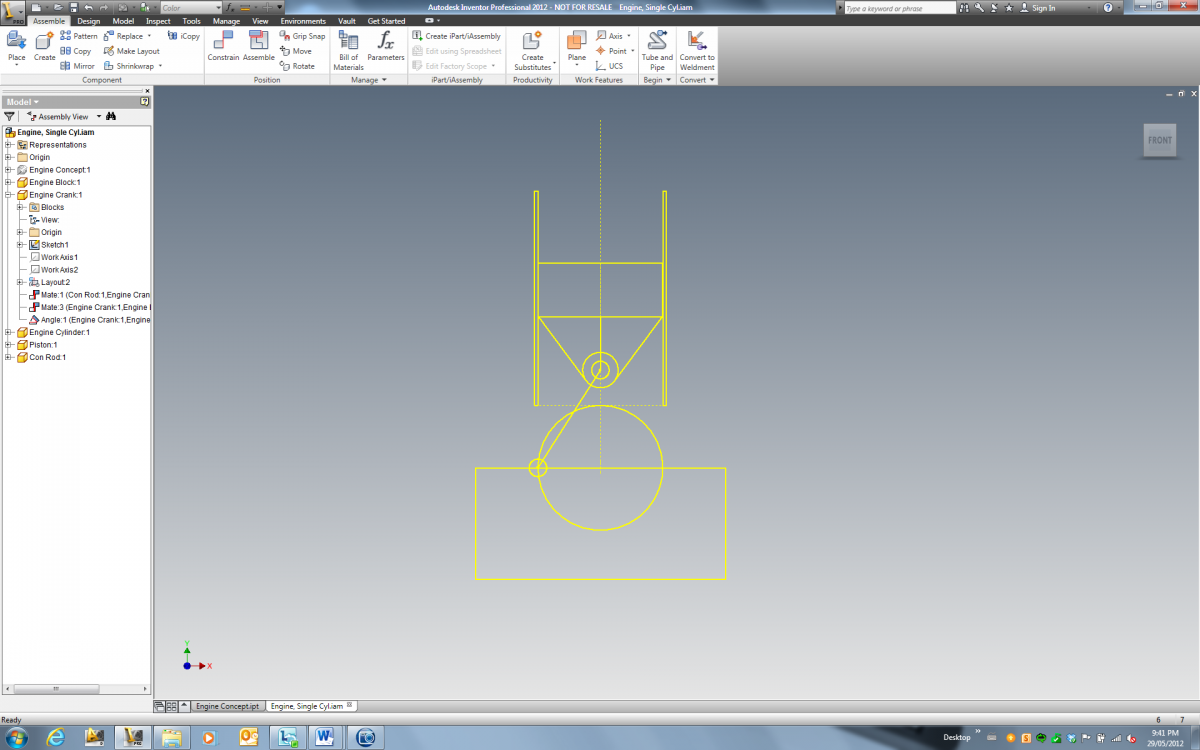 When we look at the Browser in the new file, we see the familiar assembly setup. All the 2D constraints have been converted to equivalent 3D constraints, so this is a fully constrained assembly model of our engine. It is, however, still a simple sketch representation. We are also able to add additional 3D constraints at this time. 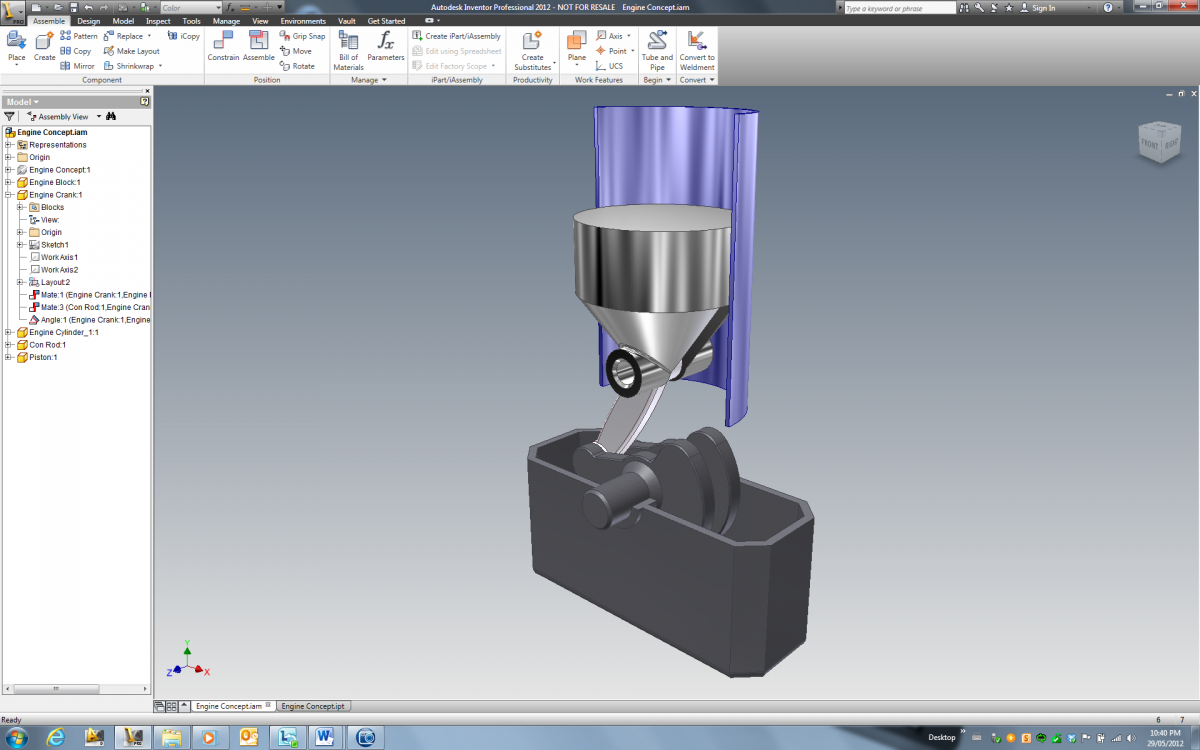 Upon completion of each part, we will test the assembly. In this example, we discover that the crank collides into the piston — the connecting rod is too short. (As I noted earlier, modifications are inevitable.) 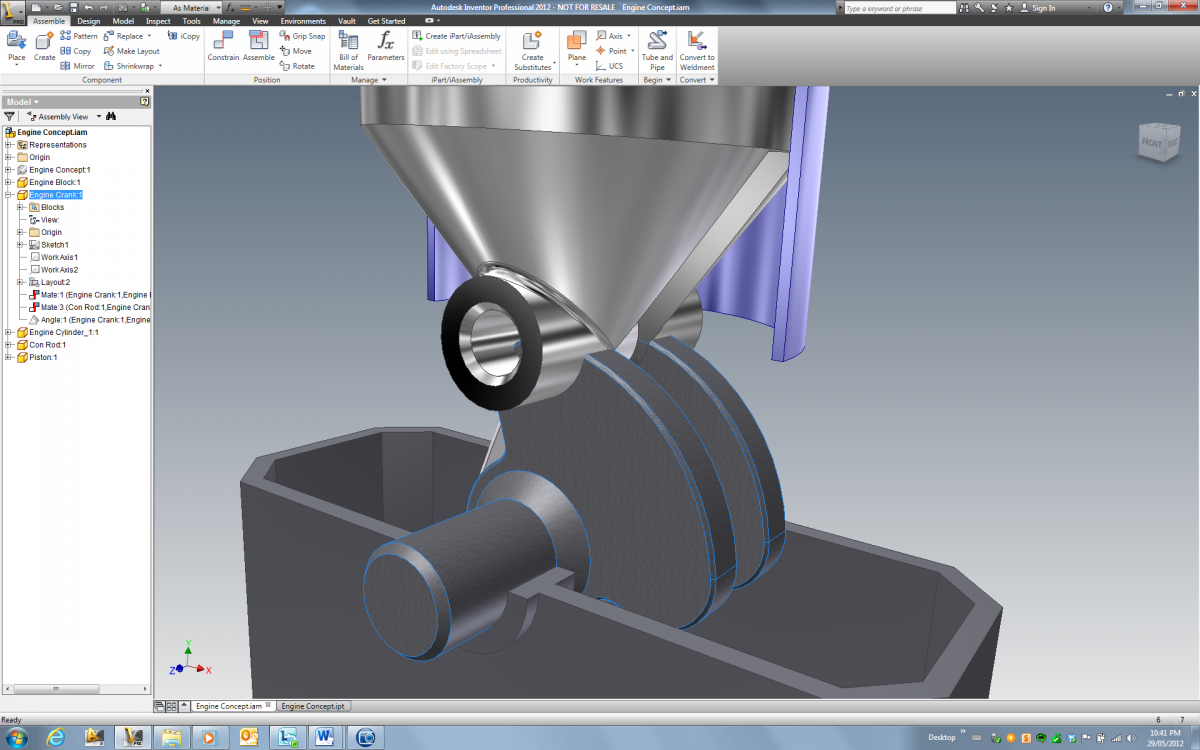 We go back to the sketch concept and analyze it; the con rod is indeed too short. However, we have the ability to go into the sketch to make a correction. Since every "part" is correctly linked, the change automatically adjusts the sketched assembly.

When we return to the actual assembly and do an update, the problem is solved. The concept part resides with the assembly and allowed the modifications to be done in a simpler environment. 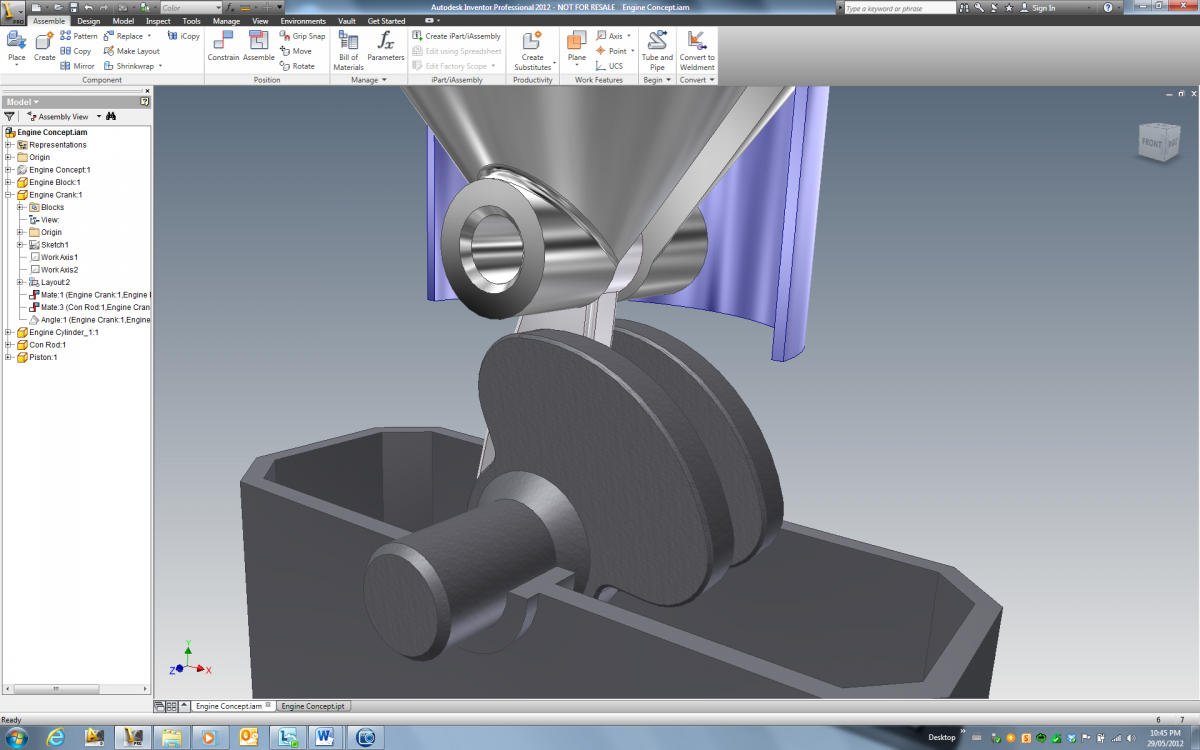 This is one of the true strengths of concept modeling and skeletal modeling. Add the benefit of establishing and maintaining the function of the assembly and allowing quick modifications, and this proves the revised adage — function before form.

About the Author: Nino Caldarola