Learn One Joint to Revolutionize Your Inventor Assemblies

A few releases ago, Autodesk introduced a completely new way to put assemblies together in Autodesk Inventor. While assembly joints are much more powerful than constraints, they are also more complex, and very different in the way they work. For this reason many users have put off learning joints, sticking instead to the more familiar constraints. The good news is that you can ease your way into proficiency with joints, while at the same time giving your assemblies an immediate boost in simplicity and stability. The secret is in the joint type that might, at first glance, seem like the least useful of the lot: The rigid joint.

A significant issue with any big assembly is managing the sheer number of assembly relationships. Assuming you can use an insert constraint, it will take at least one more constraint to completely lock two components together. If you can’t use an insert, it will typically take three constraints (and in certain cases, four) to get a single component fully constrained. Most Inventor users know the frustration of wading through a few hundred relationships to find the one or two that are causing conflicts in a big assembly. 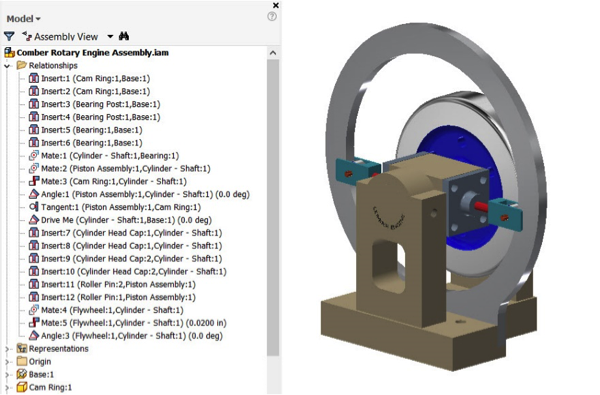 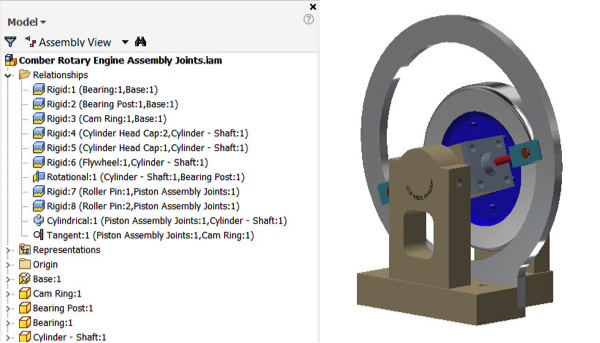 The same steam engine, assembled using joints. Notice that both the quantity of relationships and the number of relationship types have been significantly reduced.

Joints are designed to define motion, while constraints generally restrict degrees of freedom. However, “no motion at all” is a legitimate definition, and this is the job of the rigid joint. This joint simply locks down one component completely, relative to another. Considering all the components in any assembly that do not need to move, we can see how useful the rigid joint can be. This single relationship can be used in place of two or three constraints, which would otherwise be needed to fully constrain many components. Let’s look at how it works.

Joint connections are geometry-based. You can pick edges, points, center points, or surfaces, and the command will interact with them in a number of different ways. To see how, invoke the joint command and hover your cursor over a component. Take note of the disk glyph, which the command uses to indicate its position and orientation. When a second glyph is placed on another component, the joint will align the two disks like a pair of stacked pennies. The orientation can be flipped, which is similar to switching a mate constraint to the flush condition.

The order in which you select the components is important; the one you pick first will be the one that moves, so a grounded component cannot be your first pick. Joints also have limited ability to place alignment disks off of component geometry; options to place a disk halfway between two faces or offset from a selection point are available from a right-click flyout menu. Once the geometry is selected, Inventor will place alignment arrows on the disks. Think of the two disks as turntables; for certain joint types the two components will be able to pivot on the disk’s shared centerline axis. For the rigid joint we need to define an alignment vector on each component to fully define the joint. The joint will align the two vectors so the arrows point in the same direction, or in the opposite direction if the alignment is flipped. If the alignment vectors the command selects are not correct, one or both arrows can be redefined by first selecting the alignment selection for that component, and then a surface or edge to redefine the vectors.

In the basic example pictured below, I needed to position the steam engine’s cylinder head on the cylinder. With constraints, one obvious option would be an insert constraint applied to one of the bolt holes. A second constraint would then be needed to lock down the final rotational degree of freedom. All of that can be accomplished with a single rigid joint. I selected the center of one of the head’s bolt holes, and the corresponding hole center on the cylinder. These are the same selections I’d use for an insert constraint. I then adjusted the alignment vector of the joint to fully constrain the component in a single operation. 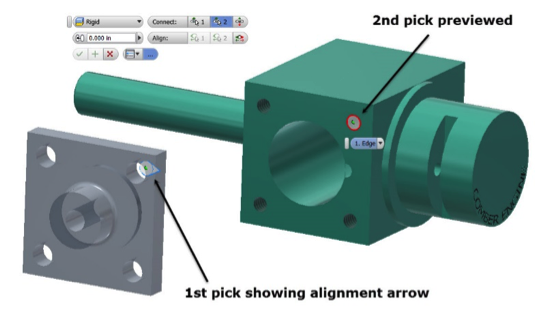 In our steam engine example above, the first was put together using conventional constraints, and the other using joints. Notice that not only are there considerably fewer relationships overall with joints, but also how many of them are simple rigid joints. The motion in this assembly is defined using just two joints and one constraint, and it’s easy to see at a glance what is supposed to move and what is not. This is another advantage of using rigid joints. With constraints, the same types are used whether a component needs to move in the assembly or not. With joints, the presence of a rigid joint makes it very clear that the relationship between those two components is static. This assembly will be stable, and not at all difficult to troubleshoot!

Rigid joints are easy to use, and are worth considering for any static assembly component. Such components can quite often be fully constrained using a single joint, which will simplify the structure of any assembly. Moreover, using the rigid joint is an excellent introduction to joint functionality in general. After a short time using rigid joints, the other, more complex joints should feel familiar, and be easy to master. As with rigid joints, using the other types of joints will reduce the overall number of relationships needed in Inventor assemblies, which makes them worth learning as well.

About the Author: Walt Jaquith