It is a simple problem to understand: The larger and more complex an assembly becomes, the more computing resources are required to manage it. In the past, the answer was to add more RAM or video memory, or to get a faster machine. This changed when the ability to suppress parts and assemblies was added.

Suppressing components, coupled with the new Level of Detail representation, gave users a new measure of control over their assemblies. Suppressing parts or assemblies actually removed them from memory, as opposed to simply removing them from the view, and snapshots of which components were suppressed could be saved in a Level of Detail representation.

While these tools helped significantly with large assemblies, the Substitute Level of Detail extends the capabilities of Autodesk Inventor to work with large assemblies. Put simply, this allows the user to swap out a complex subassembly for a simple part that represents it. The substitute still contains all of the BOM (bill of materials) information that is normally associated with the assembly, as well as the physical information such as center of gravity and mass. Using substitute parts reduces the amount of components loaded into memory, and also reduces the number of constraints and adaptive relationships that must be recalculated when changes are made. This increases performance without sacrificing access to BOM information.

Let's take a look at how to create a Substitute Level of Detail. The tools to do so can only be accessed in an assembly file.

To access the Substitute tools, first open the assembly that the substitute is to be created in. In the Assembly Browser, expand Representations, and right-click on the Level of Detail node. In the context menu that appears, highlight New Substitute.

The context menu for creating Substitutes will appear. There are three options available: Derive Assembly, Shrinkwrap, and Select Part File. We will examine deriving an assembly. 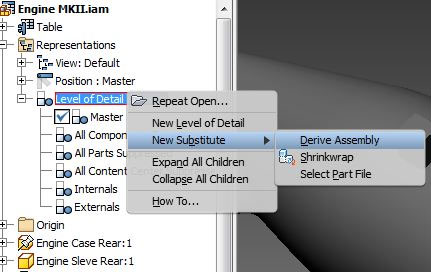 Selecting the Derive Assembly option from the New Substitute menu launches the New Derived Substitute Part dialog box. This is very similar to creating a new part; the name, location, and template used for the new part can now be selected. Once the selections are complete, click the OK button to open the Derived Assembly dialog box. 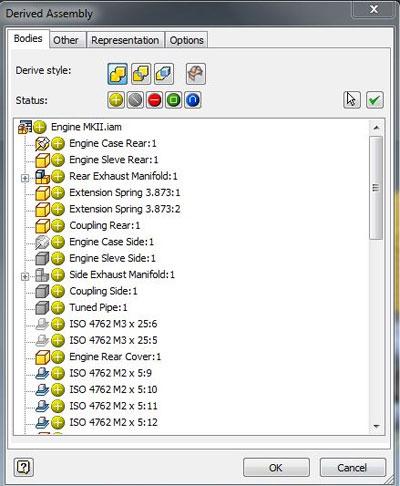 The Derived Assembly dialog box allows the user to choose which components will be included in the Substitute Part file, and which representations will be used. The Derived Assembly dialog box has many options; only the ones that relate to creating Substitute parts will be covered here.
Choosing which subassembly components get included in the Substitute part is one of the first tasks that can be accomplished. By default, all of the components will be included. Clicking on the icon next to the component name cycles through the options available.

This table summarizes the available options.

There are two important check boxes on this tab: " Keep Seams Between Planar Faces" and "Reduced Memory Mode." If the former is checked, the seams between coincident planar faces are retained. This allows for a more realistic representation of the assembly when it is derived into a single part.

The Reduced Memory Mode option is very important for reducing the size of the files. When the check box is selected, a part is created using less memory by excluding source bodies from the cache. No source bodies appear in the browser. Breaking or suppressing the link removes the memory savings.

The last tab on the dialog, Representation, can also be important. This tab allows the user to access existing representations that have been created in the assembly file. Any Design View, Positional Representation, or Level of Detail can be used. If a specific representation is chosen, it will be reflected in the derived assembly. 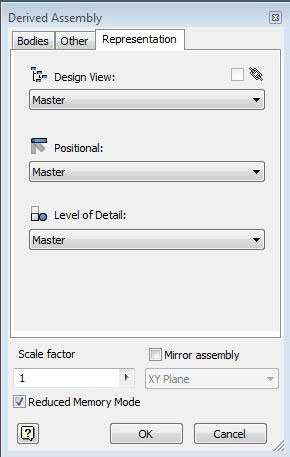 This significantly reduces the part count, since now a single component can take the place of many. This Level of Detail can be activated in any assembly that it is used in.

About the Author: Caleb Funk