IMAGINiT Tricks Tutorial: Don't get bent out of joint about the new tool on the Assemble tab — learn how to use it to your advantage.

If you started using Inventor 2014 recently, you may have noticed a change to the tools and terminology used to constrain components together in an assembly. With the 2014 release, a new Joint tool has been added to the Assemble tab, and a new term — relationships — is used to describe the process of locating components relative to each other. Let's look more closely at both and see how to take advantage of these enhancements to Inventor.

Where Are the Constraint Tools?

You may have already noticed that the Assemble tool, which appeared several releases ago to streamline constraining components, has disappeared. Don't worry: It is still there, and it behaves just like it did in the past. However, it has been moved to the expansion portion of the relationships panel.

Additionally, it is still available on the Assembly Marking menu along with the other relationship tools. 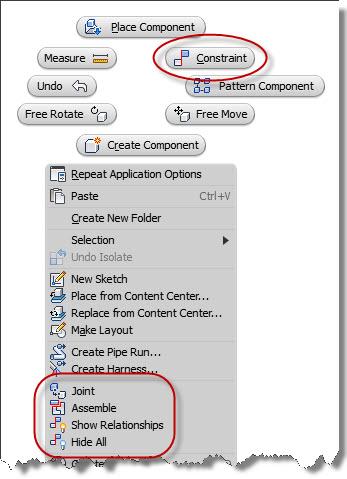 While we are on the topic of relationships, let's talk about the term and what it means to Inventor users. Basically, creating relationships is the process of adding intelligence to two components to identify how they behave with each other. In the past, this was done by applying constraints, but now it has been expanded to include applying joints. In addition to joints, there are some new visibility tools to graphically understand the relationships that have been established and their health in the assembly.

We are all familiar with the fact that when we bring components into an assembly, they come in with six degrees of freedom (DOF). When we apply constraints, we reduce those DOF based on the type of constraint we apply and what geometry we select. For example, if we apply a mate-flush constraint, we reduce the DOF of the component by two rotational and one translational.

With joints, it is a little different. When applying a joint, we are identifying how many degrees of freedom will remain after we apply it. So, if a part starts with six DOF and we apply a rotational joint, we will only be left with one rotational DOF — the ability to rotate around the axis specified.

These images depict the joints available in Inventor (left) and the DOF remaining for each (right). We can see that the use of joints produces a more fully constrained set of components more quickly than if we just applied constraints to the components.

About the Author: R. Eric France