Fully Armed with Trinity of CAD, Graebert Ramps Up Battle for DWG Users

With its multi-platform CAD solution completed, the ARES developer is more determined than ever to challenge AutoCAD.


Graebert, a small, family-run software developer, was founded with a David-and-Goliath goal in mind: taking on Autodesk with its own answer to AutoCAD. (Graebert has never been shy about broadcasting its intentions. Its flagship CAD software application was named after Ares, the Greek god of war; CEO Wilfried Graebert decorates his office with paintings of historic battles.)

The world of DWG-compatible software is crowded with a variety of suppliers. Graebert believes the answer lies in distinguishing itself from the competition with a unique solution, instead of simply a lower price. “If you compare [AutoCAD] LT vs. the alternatives, the [price] gap is not so much — so we need to differentiate,” explained Cedric Desbordes, sales and marketing executive, at Graebert’s Annual Meeting earlier this month. A subscription to AutoCAD LT costs $380/year; ARES Trinity costs $250/year. (Graebert also sells perpetual licenses — an option Autodesk no longer offers.)

The core of that differentiation lies in the word Trinity: a single license covers three products (pictured below). ARES Commander for desktop computers, ARES Touch for mobile devices, and ARES Kudo for the browser are all included. “These are not three independent products,” Desbordes emphasized. “They work together as an ecosystem.” 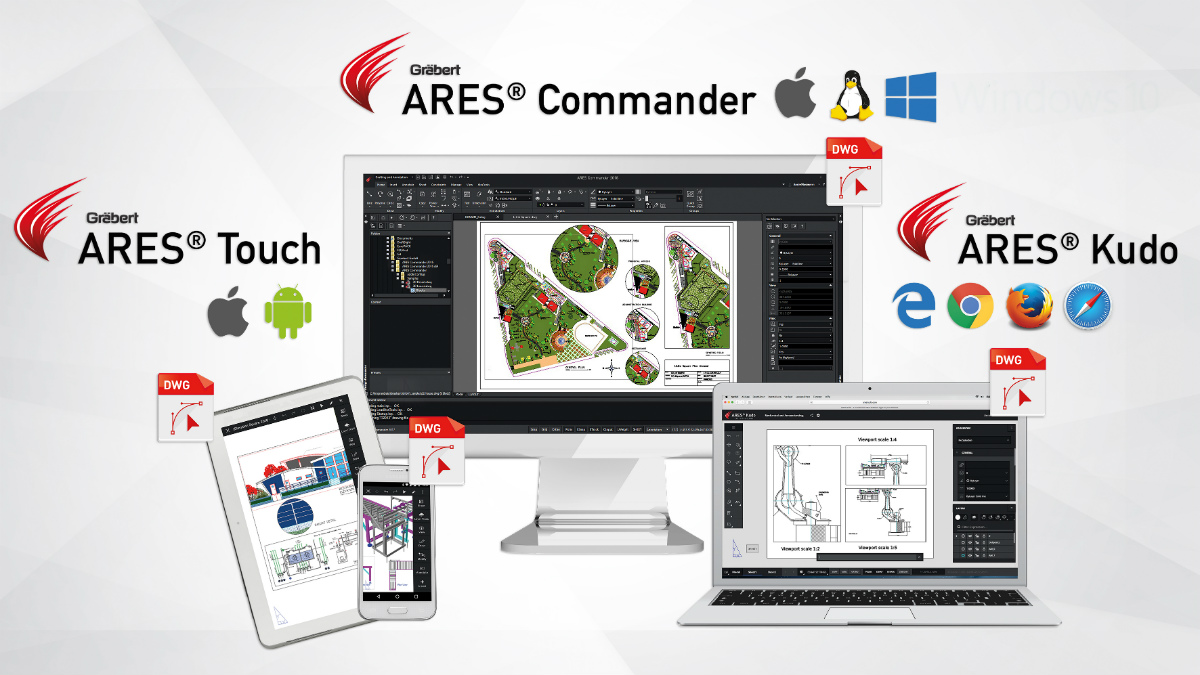 ARES Kudo was the last piece of Trinity to be realized. Graebert began a phased rollout of Kudo a year ago, and the cloud solution is now included with all Commander subscriptions (as is Touch). In addition, Ares Touch is now fully integrated with Kudo. “The Trinity concept … is now reaching maturity with the release of ARES Kudo,” said Wilfried Graebert. This means that Graebert can be a “strong contender with our competition,” he continued.

Although it provides that functionality, Kudo is not intended to be a primarily a viewer, but a full-featured editor. “We’re not really optimizing for viewing,” commented CTO Robert Graebert, who noted that the company could do things differently to make a faster viewer — such as not work directly from DWG — if that was their goal. “For us, we thought the viewer is valuable, but it’s just a subset of the editor,” he continued.

The company also stresses that Kudo is not a watered-down version of desktop software. “The goal is not to have ‘lite’ versions on mobile or cloud,” said Desbordes. Most of the features in ARES Commander for 2D have already been migrated to Kudo, the company reported, and further development is ongoing.

Kudo will soon support additional file formats, including DGN (generated by Bentley MicroStation) and RVT (generated by Autodesk Revit). “Every three weeks, it opens more files and opens them faster,” said Robert Graebert, referring to the typical update cycle for Kudo. “There are still limitations that exist … we’ll keep chipping away at it.”

In addition to providing DWG editing and viewing functionality, Kudo can serve as a hub for DWG files stored in users’ cloud storage accounts (including Box, Dropbox, Google Drive, Trimble Connect, Onshape, and others). Kudo users can search all their connected accounts for a desired DWG file simultaneously.

To share projects, Kudo users can send a URL (or a view-only link, if desired) to collaborators: 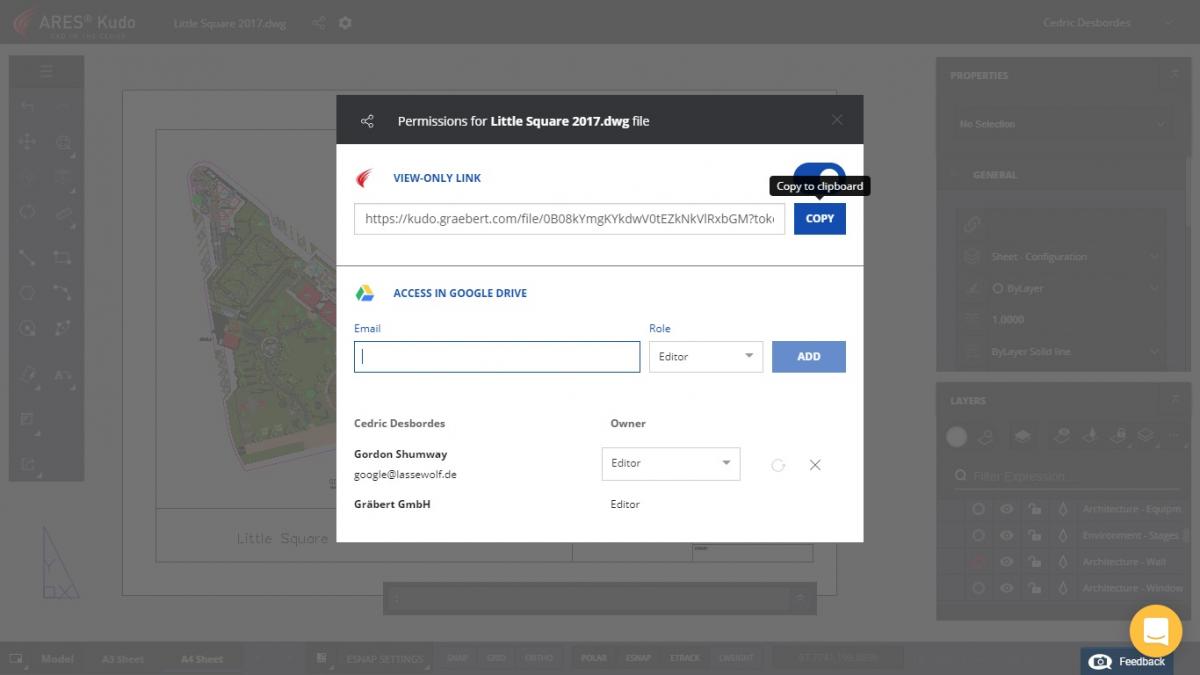 View-only files are accessible to users whether or not they have ARES Kudo. Here are some examples:

Anyone visiting the address will always see the latest version of a drawing, since changes to the file are incorporated immediately whenever modifications are saved.

View-only links allow project files to be shared with any team members or external collaborators. Images courtesy of Graebert.


Confronting the Giant — with the Help of Reinforcements

Graebert is growing, from its expanding headquarters in Berlin to its accelerated hiring in India. But the company is clear that its progress is a team effort that also relies on third-party developers, original equipment manufacturers (OEMs), and resellers. These partners build their own products, such as DraftSight and CorelCAD, around the ARES OEM platform and Powered by ARES 2D CAD engine; expand the ecosystem of add-ons and apps; and help support customers and educate the market.

“When you have a product like [what every] other company has, there’s not much to explain,” said Wilfried Graebert. But with an innovative solution that includes mobility, as Trinity does, “what that means, and how it [can] work for the customer, needs to be explained.” That means the company needs some time to bring Trinity to the market — and some assistance from resellers. Graebert has far more developers on staff than sales and marketing professionals, Wilfried Graebert noted. As Desbordes put it, “We need to walk on two legs, and they are helping each other.”

Trinity is also making Graebert more interesting to resellers, some of whom used to be Autodesk resellers, said Desbordes. (Perhaps they are following the path of Wilfried Graebert, who was the first German distributor of AutoCAD, many years ago.)

But even with an extensive network of outside partners, does Trinity pose enough of a threat that Autodesk has altered its decision making in response? Graebert believes so. “They are taking some actions to counter what we are doing,” said Desbordes. He cited Autodesk’s change of pricing strategy in Japan, a market that has a “strong interest” in Trinity (three of the top five construction groups in Japan use ARES).

Regardless of how Autodesk perceives its competitors, it’s clear that Graebert has great confidence about the value of its products and its competitiveness going forward, and is eager for more visibility in the market. “We believe we are now in a position that we don’t follow others, we go our own ways,” said Wilfried Graebert.