Bad blood continues between the developer of GstarCAD and the IntelliCAD Technology Consortium in conflict over use of code.


Last month, the IntelliCAD Technology Consortium (ITC) announced that it had been awarded a judgment of more than a quarter of a million dollars in its lawsuit against former ITC member Suzhou Gstarsoft, the developer of GstarCAD. The suit alleged that Gstarsoft continued to use IntelliCAD code in its GstarCAD software when it was no longer meeting ITC membership requirements, including the payment of membership dues.

Cadalyst reached out to Gstarsoft for its perspective on the judgment, and received the following statement from Vice-President Meiyu Huang, who is responsible for the International Business Department of Gstarsoft.

First of all, thank you for giving me such a chance.

As we are preparing a lawsuit against ITC and our lawyer requires me not to talk with too many details at the moment, I would like to make this email shorter than the original one. I hope to have your understanding.

I would like to give you related background information and our comments on the issue from the following aspects.

1. How and why did this happen?

Right after ITC launched the lawsuit and posted the news on its website. Mr Ralph Grabowski of upFront.eZine (WorldCAD Access) interviewed me. I answered his questions regarding the lawsuit in detail, including how the disputes between ITC and Gstarsoft started and what negotiation we had before ITC launched the lawsuit. From the interview you can find the background information you may be interested. Please refer to the following link: http://www.upfrontezine.com/2015/05/itc-vs-gstarsoft.html

2. What were ITC's claims and how did Gstarsoft respond?

1. Entry of judgment holding Gstarsoft liable for breaching the commercial membership agreement;
2. An order compelling Gstarsoft to participate in an audit;
3. Damages in an amount greater than $250,000.00, plus interest

The above claims were based on their accusations of:

1. Nonpayment of membership fees
2. Refusal to allow the ITC to conduct an audit of the programming code
3. Failing to comply with the membership rules

Regarding all the above accusation and claims, you can also refer to the interview by Mr. Ralph Grabowski to know our stance from the very beginning.

Gstarsoft refused the accusations by ITC based on some forged evidence and false statements. We chose not to respond to it. Instead we sent a lawyer's letter to ITC after the arbitration to express our stance and concerns again and strongly required ITC to withdraw the arbitration. ITC did not respond to it and unveiled the arbitration result on February 26th.

3. What action is Gstarsoft going to take next?

ITC apparently has forged some evidence and used false statements to receive a misleading award, which is not in favor of Gstarsoft.

Just one simple example, ITC accused Gstarsoft of continuously using words like IntelliCAD in the GstarCAD product website even they had terminated Gstarsoft's membership. They enclosed a screen capture of the website as evidence, claiming it was a capture on September 10th 2015 (see image below). 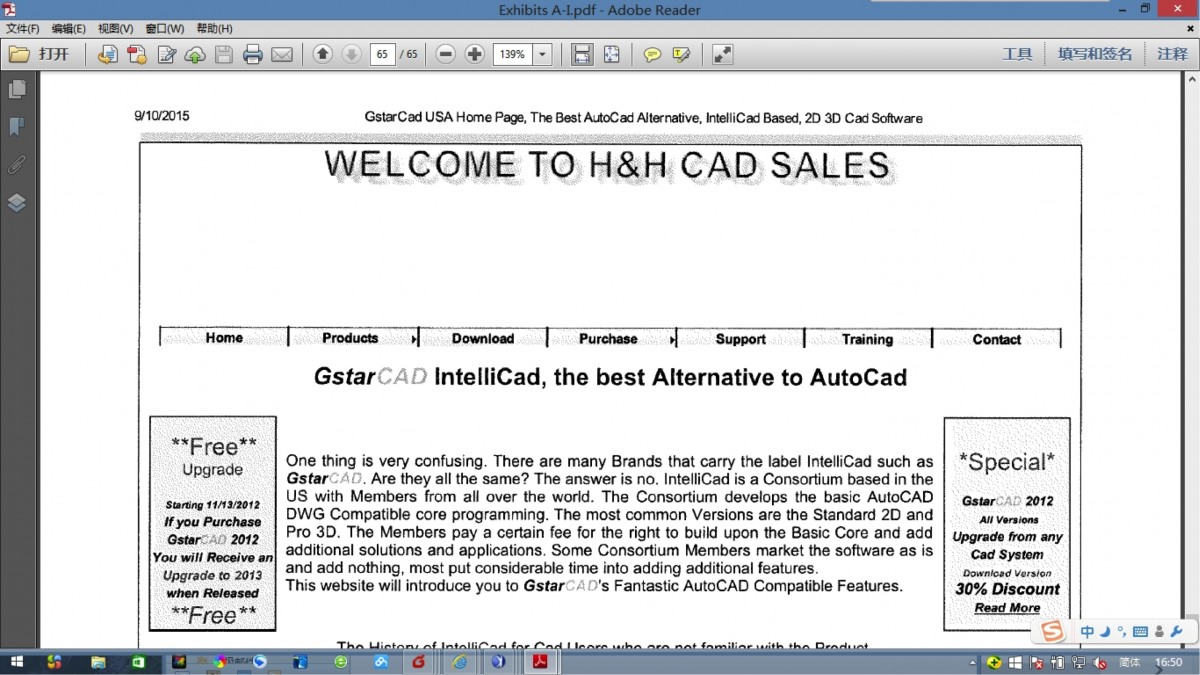 But the contents of the website was a campaign of GstarCAD2013 in year 2012. In September 2015, Gstarsoft was about to release GstarCAD2015 for beta test. How did the new version campaign continue for nearly 3 years? Not to mention that Gstarsoft was still a key member of ITC in 2013. (There are other forged evidence but I cannot show you at the moment.)

ITC used such kind of evidence to mislead an award in favor of them and unveiled it to the public. It already seriously infringed Gstarsoft's business and reputation. We are in preparation now and will file a suit against ITC very soon. We are very confident to win the suit. ITC shall be liable to Gstarsoft for direct and indirect loss of revenue or profit, for loss of reputation or any indirect or consequential damages.

In response to these allegations, ITC legal counsel Shawn M. Lindsay shared this statement with Cadalyst on behalf of the ITC:

Gstar is embarrassing itself. It has been making these statements and threats for nearly a year now. The United States District Court for the District of Oregon is the federal court that confirmed the quarter million dollar judgment and order compelling Gstar to undergo an audit. United States district courts don't take such actions without serious attention to the law.