Pandemic Transforms the CAD Industry in 2020 and Beyond

The 2020 CAD Report from Jon Peddie Research was completed at the end of 2019, before the pandemic shook North America. How has the landscape been affected in the six months since?


During the first half of 2020, it became obvious to people in every business that expectations for the near future would have to be seriously adjusted. Pandemics will do that.

The 2020 CAD Report from Jon Peddie Research was completed at the end of 2019. At that time — which seems so long ago — we were cautious about the prospects for 2020 and beyond. We would love to claim that we had seen the pandemic coming, but back then, we thought of viral epidemics as a seasonal challenge centered primarily in Asia. 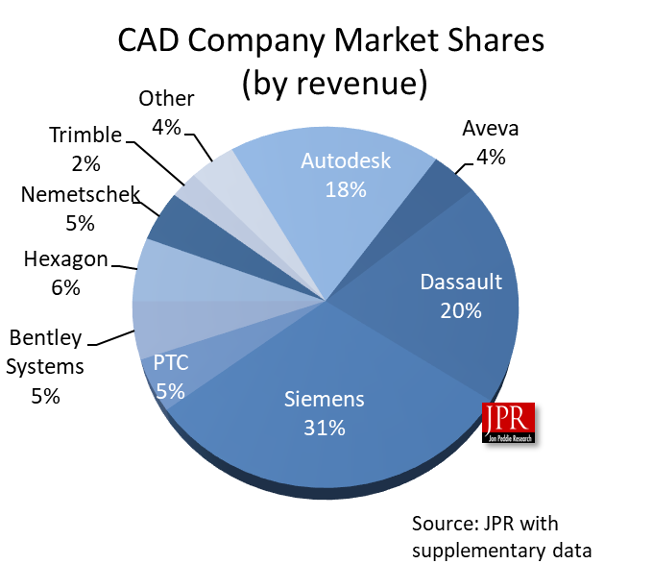 Market share in CAD has remained relatively stable over the past ten years, but that’s a deceptive measure because each company is carving out specific areas of expertise so each can run the race in its own lane. There has been enormous change over the past decade that is serving these companies well in recession.

Instead, we were more concerned that desperately needed infrastructure projects had been stalled for years in the US, and worldwide global manufacturing had taken a downturn due to trade issues and fracturing trade alliances. In addition, the threat from climate change loomed large over every human activity.

CAD Industry Undergoes Major Changes, with AEC at the Forefront

The AEC industry was the success story of 2018–2019 thanks to the growing acceptance of digital technologies, especially building information modeling (BIM) and also modularization and on-site fabrication. Specifically, the construction industry re-emerged as a huge opportunity as decades of hidebound traditional practices began to modernize and reveal long pent-up demands.

The CAD industry as a whole has restructured for resiliency. It has transitioned to subscription, which offers a buffer for short-term shocks, and there is plenty of room for expansion in the steady adoption of digital twin approaches that connect designs, data, analysis, and documentation to the real-world objects they represent, including autonomous vehicles, smart cities, airplanes, power plants, industrial machines, and mobile phones.

So far, the plan has been working: CAD company revenues have been stable through the first half of 2020. But most companies are guiding down for the rest of the year as hopes fade for a fast end to the pandemic and a fast recovery. Instead, the crisis is evolving, and we’re seeing rolling outbreaks worldwide. We know now that recovery is going to take some time.

What’s also true is that in our modern age, every period of recession has been accompanied by innovation and transformation. 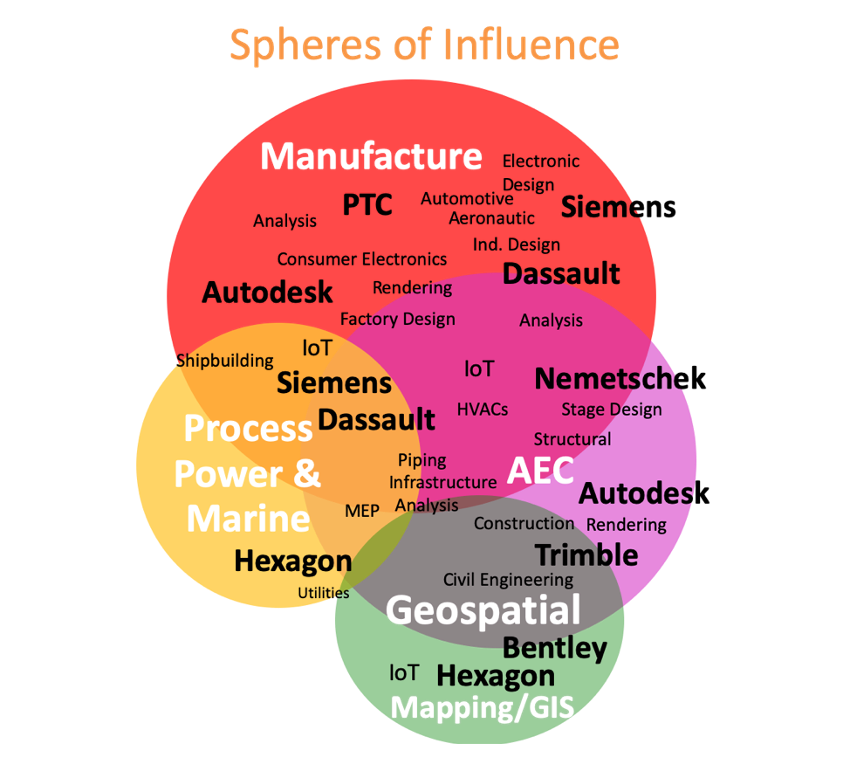 Room to play: The major players in the CAD market have their own areas of influence, but the digitization of industry means there is quite a bit of overlap. The successful companies in the coming decade will be those most able to make interoperability easy for customers.

As we said, the AEC industry has been ahead of the curve. Driven by a shortage of skilled workers in construction and also the lack of affordable housing challenges seen worldwide, the construction industry has been on the forefront of digital transformation. Autodesk, Bentley, and Trimble have all been investing in new tools for construction. In 2018 Autodesk began the acquisition process for Assemble, BuildingConnected, and PlanGrid to build on to BIM 360 and create the Construction Cloud; Trimble has bought Viewpoint and e-Builder; and Bentley has bought Synchro and most recently NoteVault. All these tools enable much better transparency for construction costs and work progress.

Continued demand for connected construction software is pretty much guaranteed. The industry has long relied on armies of low-cost workers working side by side. It was always inefficient, dangerous, and often immoral; now it’s becoming impossible. Instead, construction companies are adapting techniques from manufacturing: They’re moving to using pre-fabricated modules that can be built elsewhere and delivered to the job site, more automation and fabrication onsite, and direct communication with workers onsite who can interact with more-informative 3D models.

The companies building software for mechanical design and manufacture have led the industry in digitalization for decades. They are marching forward into a new age of digital twins, which are now coming much closer to being reality instead of an ambitious vision. For example, Siemens has defined the digital twin as a single model that grows and develops with the development and eventual deployment of the real-world project.

In process and power, we’ve seen Siemens and Bentley forge a powerful alliance that builds on the strengths of both companies, and not coincidentally fuels continued whispers that Siemens may buy the privately owned Bentley Systems. The rumor of a Bentley–Siemens merger has been countered by Bentley’s cyclical announcements of an imminent IPO. (The one thing that possible IPO has never been is imminent.)