Pandemic Transforms the CAD Industry in 2020 and Beyond

The 2020 CAD Report from Jon Peddie Research was completed at the end of 2019, before the pandemic shook North America. How has the landscape been affected in the six months since?

We don’t know what’s going to happen on the merger front, but we are seeing quite a few symbiotic relationships emerge across competitive companies.

Microsoft has teamed with PTC to build AR applications. Bentley and Microsoft have teamed for AR, and Bentley is also linking its ProjectWise tools to Microsoft Teams to enable easy access to BIM tools for small and mid-sized businesses.

PTC has partnered with Rockwell Automation in a powerful alliance that is accelerating factory automation with the addition of the Internet of Things (IoT) and also PTC’s AR tools.

Dassault is determined to bring its hundreds of thousands of professional users under the umbrella of its 3DEXPERIENCE umbrella, which is a mostly cloud-oriented platform. In the future, says Dassault, the distinctions between Solidworks (its mainstream family of tools) and Catia (its high-end line developed for the enterprise) will wither away. That’s been a difficult argument for a lot of Solidworks users to accept, but crisis has a way of making things happen that didn’t seem likely before.

On another front, Autodesk has been working closely with AWS and building its Fusion family on the cloud. Meanwhile, PTC acquired Onshape and used its technology to build the Atlas Platform for an end-to-end suite of CAD/PLM products.

The growing commitment of cloud services providers — including Amazon Web Services (AWS), Google, and Microsoft Azure — to build in cooperation with software partners has resulted in interesting innovation that’s going to be jet-propelled by the arrival of 5G. And, it’s worth pointing out that 5G as an affordable option for real-time internet communications is still a ways out. With the enforced delay from lockdowns, we’re likely to see an interesting confluence of technologies as 5G and cloud-based computing meet their adoption tipping points. When 5G finally sneaks into our lives and underpins all connections, there will probably be little discussion about software as a service (SaaS) — it will be invisible.

The baseline is that the alliance between the internet services giants and design and engineering software providers will enable accessible workstation-level computing on tablets, Chromebooks, and phones, thanks to remote processors and also powerful remote workstations at home thanks to advances in network computing such as HP Remote Graphics Software (RGS), BOXX Cloud Services (BCS), and PCoIP solutions from Dell and Lenovo. Like an airplane being built while it’s being flown, the coronavirus lockdowns are driving fast new development on this front. 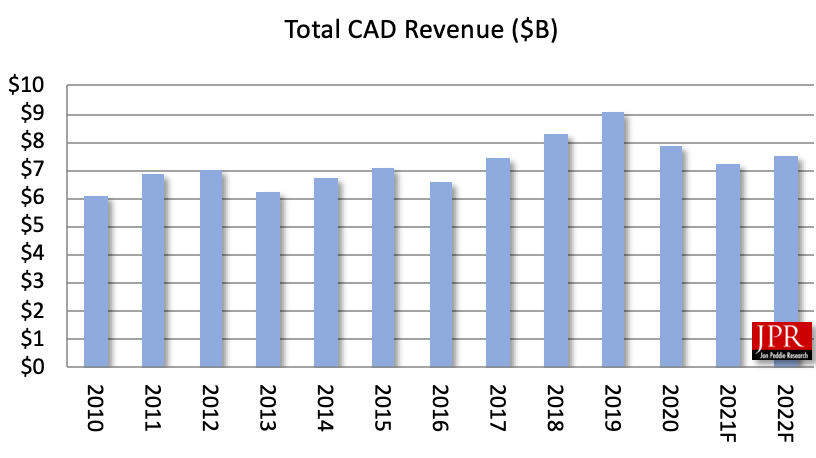 JPR expects the recession to have a lasting effect on software revenues for design and engineering. Source: JPR.

To refer back to JPR’s CAD software forecasts, we had put the value of CAD software worldwide at $9.1 billion at the end of 2020. We had expected growth to be modest in 2020. Instead we now see it decline to $7.9 billion. Subscriptions helped in the first half of 2020, as CAD companies warn that customers are holding off on new orders. And here’s how subscriptions can be a bellwether: If customers are holding off on new orders, that doesn’t so much mean that companies are making do with older software, it means they’re not hiring — and they may be letting people go. Subscriptions are tied to real people. For this reason, we are pessimistic about 2021. We don’t see jobs bouncing back immediately.

We also looked at the recession of 2007–2008. The banking crises, real estate troubles, and their domino effects on interrelated world economies became clear in 2008, but we saw some of the worst declines for software (and hardware) companies in 2009, and the effects rippled outward like a rock in a pond. Although 2019–2020 is a different situation (and as we said, there is resilience), lost jobs — whether they are lost to pandemic lockdowns and failing businesses or to more efficient workflows — are a reality that’s hard to get around. People without jobs don’t buy cars, clothes, new computers, or luxury goods, to name some obvious changes that are already happening.

In our worst-case scenario, which is reflected in the chart above, we see 2021 down quite a bit, but like all forecasts there’s plenty of room to be wrong, and we can hope 2021 is flat or down only slightly. In either case, we see a much brighter picture for 2022. That’s when the engines start turning again, and the positive drivers we saw in 2019 begin again with a boost from new innovation. At least, that’s the way we’re seeing it right now.

In hindsight, it seems like the world certainly should have been better prepared for the coronavirus pandemic, which had been predicted — but no one really understood what a pandemic would look like in 2020. We’re getting the idea now, and it is dramatically changing the landscape for future development of design tools.