For some people employed in the manufacturing sector, “automation” is an unsavory term, implying a downsized workforce. According to analysis from the University of Oxford and the Wharton School, 47% of the jobs in the U.S. workforce today will be automated over the next two decades. “That’s an uncomfortable statistic to face,” acknowledged Stephen Hooper, Autodesk senior director of business strategy and marketing for design and manufacturing. To Autodesk, however, automation is a good thing — and a goal that’s driving the company’s software development choices.

“Automation represents opportunity — tremendous opportunity for everybody in this room,” said Hooper, addressing the crowd attending the Design and Manufacturing keynote session at Autodesk University 2017, held November 14–16 in Las Vegas. There is a catch, however: “You can’t embrace [this] ideology unless you radically rethink the way you design and manufacture. Not as two separate processes, not as design with CAD and manufacturing with CAM or simulation — you need to redefine these processes as one single process.”

Hooper’s co-presenter Lisa Campbell, Autodesk senior vice-president of business strategy and marketing, stated that automation enables users to be more creative, releasing them from the constraints of manual manufacturing processes. For example, milling machine capabilities place limits on design features such as voids and latticed object interiors, but automated manufacturing via 3D printing eliminates those constraints, making new types of designs feasible. “Our imaginations are much better than that — we can imagine much better things,” Campbell asserted. 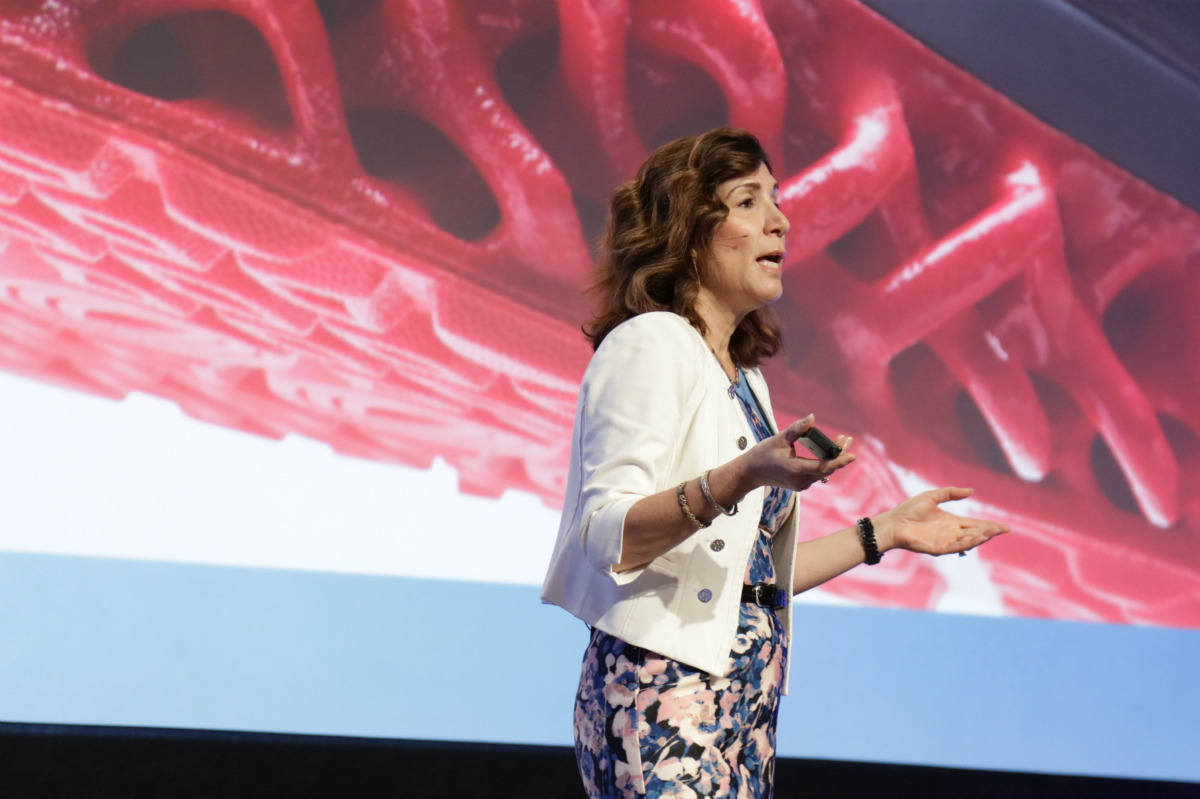 Lisa Campbell discussed ways that automation in manufacturing can ease constraints on design. The image behind her depicts the spongy latticed midsole of an Under Armour athletic shoe — a 3D-printed component of a commercially available consumer product. Image courtesy of Autodesk.

As Hooper explained it, 3D printing is one of the ways that automation subverts the traditional relationship between a design’s complexity and how expensive it is to craft. “3D printing turns that logic on its head: in the world of 3D printing, there is no cost to construction, there is no cost for complexity,” he said. “The more intricate the design becomes, actually you’re saving money, because you’re not paying to produce that material.”

It’s not just a matter of what we can make through automation, but when we can make it, Campbell explained. The lead time required to create traditionally manufactured parts forces companies to maintain stockpiles of spares, so they’re on hand when a need arises. That’s an investment that mostly goes unused: “70% of spare parts around the world are wasted,” Campbell said. If manufacturing could instead be done at the time and place of demand, “you would essentially be using 100% of your inventory; imagine the change in the world if we could do that.”

Automation can also augment our natural human capabilities, as evidenced by devices such as smartphones, Internet-connected digital assistants, and wearable fitness trackers. According to Campbell, we are now harnessing “this kind of automation, but even more powerful, for design and manufacturing.”

Fusing Design and Manufacturing: It’s in the Name

“To embrace pushbutton manufacturing, we believe that you need something radically different in the way that you design, and that is what Fusion 360 is all about; it’s the convergence of design and manufacturing,” said Hooper, referring to Autodesk’s cloud-based 3D CAD/CAM solution.

The company announced several Fusion 360 updates during the event. For starters, AnyCAD technology (which was introduced to Autodesk Inventor in 2015) now enables interoperability between Fusion 360 and Autodesk’s entire Product Design and Manufacturing Collection, including Inventor. AnyCAD keeps associativity between products, Hooper said, so “a change made anywhere is now reflected everywhere”: part models, assemblies, 2D documentation, across simulation studies, in the code created to drive CNC cutters on a shop floor, etc.

Fusion 360 Ultimate customers now have access to a tech preview of the Autodesk Generative Design (AGD) service. Fusion is “a next-generation product development pipeline … but building a digital pipeline that’s connected is only half of the solution. Once you’ve connected the pipeline, you have to think about how you automate that process — and that’s where generative design and manufacturing steps in,” said Hooper.

AGD enables users to generate dozens or hundreds of possible solutions to a single design problem, such as how to create a lighter airplane partition, in Airbus’s case. “The problem is, that with a design as complex as this, even if there were only say 15 variables, and each variable had maybe 10 possible parameters, you would end up with a potential solution domain of 10 to the power of 15 possible alternatives — a solution domain far too big for any individual human being to explore mentally,” Hooper explained. Automation, in the form of cloud-powered topology optimization combined with simulation, can help users create and evaluate far more possibilities than they can alone. “The designer can make a more informed decision about which design strategy to pursue,” he continued.

And to applause from the crowd, Hooper unveiled Fusion Production, a cloud-based factory management tool that combines production planning, job tracking, and machine monitoring, connecting the design and production engineering environment to the physical manufacture of the product.

“Fusion Production means that you can start to take the information you’ve defined as part of the design and engineering process and provide people on the shop floor with access to that data. You can close the loop from the production environment,” he explained. Users will be able to send part production data from Fusion 360, PowerMill, or FeatureCAM to Fusion Production in the form of digital work instructions. Autodesk expects to announce availability and pricing details for Fusion Production in early 2018.