The introduction of 3D printing three decades ago heralded the arrival of a new age in manufacturing. Product designers may start by creating a digital model from scratch, or raw 3D data (such as point-cloud data from a laser scanner) may be imported into a CAD program, where it can be manipulated to create a "watertight," or closed, geometry. The file is then sent to a 3D printer to create a physical object from plastic, metal, or other materials — the options are multiplying.

In the past decade, these techniques and technologies have rapidly been adapted for medical applications. Now, they are poised to revolutionize the production of medical devices and prosthetics, offering unprecedented custom fitting and cost efficiency, reducing surgical times, and improving patient outcomes.

The surgeons had been using CT scans of patients' jaws and facial structures to map out procedures before performing surgery, but the 2D images lacked the realism of a physical model. So the clinic began using a Stratasys Dimension 3D printer to create models from CT scans using ABS thermoplastics. Surgical teams employed these models to precisely plan the sequence of a surgery in advance, rehearsing incisions and fit resections before the operation. According to the clinic, this translates to safer, more accurate, and more efficient surgery. It also means that any screws or plates that will be needed can be produced, tested, and sterilized well in advance of the procedure, ensuring they are ready to use before the patient enters the operating room.

Perhaps most important, 3D models have shortened the time patients are under anesthesia. Surgeon Giorgio Tofanetti stated that rehearsing on a model of the patient's jaw reduces the length of that surgery by 10–15%. In addition to improving patient safety, shorter surgical times optimize clinic efficiency, sometimes enabling a team to perform two surgeries in a single morning.

"We will literally simulate the entire surgery in advance," said Tofanetti. By the time the patient is on the operating table, "we have already planned the entire procedure, which means we are faster and that the risk of mistakes is greatly decreased."

CAD software and 3D printing are transforming the dental restoration business as well.

Albensi Dental Laboratory in Pittsburgh, Pennsylvania, for instance, has combined digital scanning with 3D printing to improve its processes — and has cut product turnaround time from ten days to three. The company manufactures custom dental prosthetics, including crowns, bridges, implants, and dentures, for dentists and prosthodontists throughout the U.S.

"For the first 25 years [we were in business], we did everything by hand in an analog fashion," said CEO Don Albensi. In 2003, the company began to experiment with 3D scanning and printing at a very basic level. "Dentists would provide us with stone models they had created from a mold or impression," he explained. "We accurately scanned those models into a digital file, but the models themselves [sometimes] contained multiple flaws" because the dentist's impression was not quite precise or the modeling material had expanded or contracted. 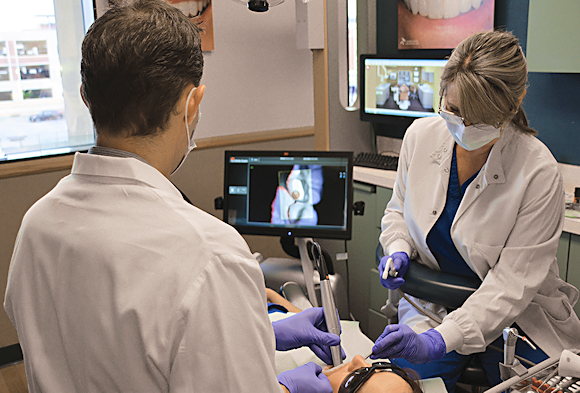 Albensi knew he had to eliminate the source of errors to create the highest-quality product, and adopting a fully digital process was the key. Today, everything the company designs and fabricates is "as custom as a fingerprint," Albensi stated.

The process starts when dentists use oral scanners to image the inside of a patient's mouth, explained Chris Halke, Albensi's CAD/CAM supervisor. These light-emitting scanners typically capture point-cloud or gray-scale data. "Companies such as 3M and others have developed oral cameras that capture video at 60 frames per second. The software built into the scanners basically stitches the images together and automatically uses that data to create a raw 3D image," Halke added. 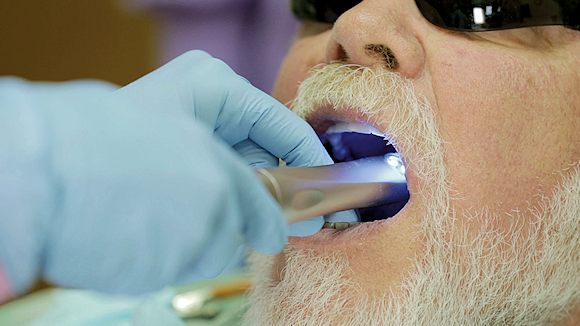 Intraoral imaging is faster and more accurate than making impressions using a tray and crafting stone models that can shrink while drying. Image courtesy of 3M ESPE and Dr. Laura Sengbusch.

The dentists don't need to know anything about CAD; they simply forward the files in stereolithographic (STL) format to Albensi by way of a secure Internet portal. "When we receive the STL file, we still need to process the raw scan," Halke continued. "It's accurately captured the data, but that in and of itself does not constitute a 3D object. It's like laying a tablecloth over a table: You have the impression, but not the actual table. We run the raw data from the scan through a series of software packages on site, including 3Shape," a CAD/CAM solution for digital dentistry.

The resulting CAD model is then fabricated on a 3D printer: The company uses the EnvisionTEC 3Dent for model work and the EnvisionTEC Perfactory 4 Digital Dental Printer (DDP4) for contour printing.

According to Albensi, the old manual process of wax preparation took a dental technician about 45 minutes. "We now have designers with no dental background who can complete the model work in five minutes," he said. "Not only that, but we can do quality control in the digital environment prior to printing or milling the product. We could never have done that before."

"One of the factors we use to gauge our success is the number of returns from the dentists," added Halke. "Using this process, we've seen a significant drop in the [number of] remakes, indicating a higher-quality process." Also, Albensi noted that clients report that "chair time" has been reduced from 30 minutes to five because the restorations fit so well.

Dentist Rick Dukovich, an Albensi client from Pittsburgh, stated, "Not [having to bring] a patient back for a second or third or fourth visit really impacts our business."

In addition, by using a fully digital process, technicians are able to design the model work for the restoration and the restoration itself simultaneously, as opposed to a more sequential workflow, Halke explained. "This [increased productivity] allows us to compete with offshore companies on a price basis and deliver service and quality that they can't offer," Albensi said.

But not all dentists are outsourcing the manufacture of dental prosthetics. A new breed of specialized dentists, known as prosthodontists, is rapidly bringing CAD/CAM dentistry and 3D printing right into the examination room. According to board-certified prosthodontist Kent L. Knoernschild, professor and director of the Advanced Specialty Program in Prosthodontics at the University of Illinois at Chicago College of Dentistry, approximately 15–20% of dentists and prosthodontists are now using CAD/CAM technologies themselves — and the numbers are growing every day.

Knoernschild said, "Digital dentistry can save time for the patient and the prosthodontist by reducing the number of appointments. With digital impressions, teeth are scanned, and the new crown can be made with CAD/CAM technology in the dentist's office while the patient waits."

In addition to using intraoral scanners, prosthodontists use cone-beam computed tomography (CBCT), an advanced radiography method that allows users to build a 3D digital model of a patient's skull. CBCT files can be converted to proprietary CAD software formats. "With CBCT, we can diagnose; plan implants, crowns, and bridges; make an individualized surgical guide; and accurately place implants so that the crowns or bridges are made just as they were initially planned," Knoernschild explained. "For patients without teeth, prosthodontists can even make CAD/CAM milled or printed dentures in only two appointments." 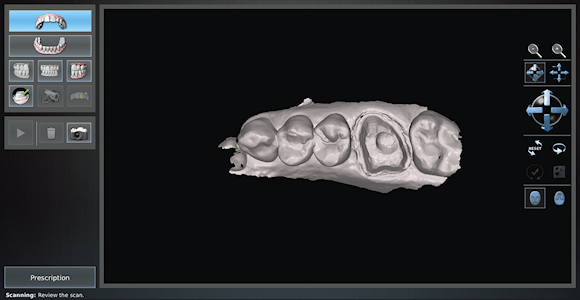 Using a handheld camera that can capture video at 60 frames per second, dentists or prosthodontists can collect raw scan data in STL format. Image courtesy of 3M ESPE and Dr. Chad Duplantis. 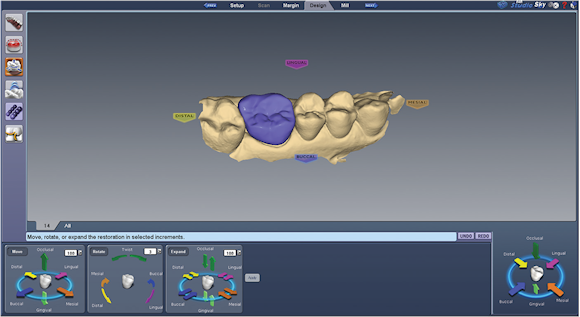 This final design for a crown, created using E4D Design Center CAD software from E4D Technologies, is ready to be milled or 3D printed. Image courtesy of 3M ESPE and Dr. Chad Duplantis.

Though soft tissues and organs have yet to be created via 3D printing, that possibility is the focus of extensive research. Rocky Tuan, a professor and executive vice-chairman of the department of orthopedic surgery as well as the director of the Center for Cellular and Molecular Engineering at the University of Pittsburgh School of Medicine, is developing 3D-printed cartilage with the EnvisionTEC Perfactory. This research has yielded the first successful printing of living human cartilage tissue atop a chip — a miniature laboratory device used to test new therapies, evaluate the effects of environmental impacts and diseases on organs and tissues, and check for drug toxicity.

Printed tissues are far from ready to take the place of plastic and metal replacement joints, but the research is very promising, according to Tuan.

In the future, 3D printing of cells raised in a lab may reduce the need for donor tissue and organs, meaning more patients can receive treatment without the complications and lifelong medication regimens associated with organ donation. And if the technology continues on its current trajectory, printed organs may someday completely eliminate the long wait times for donor organs — which will be a welcome change for every patient who needs one.

About the Author: Scottie Barnes