Mastenbroek serves the cable and pipe-laying industries for utility, offshore, and agricultural applications around the world. In addition to the range of standard and custom-built trenchers and plows it manufactures, the family-owned British company also supplies cable and pipe-laying systems, trench backfill machines, tracked gravel trucks, tractor-pulled gravel trailers, and a range of custom-built special machinery.

Mark Taylor, design manager at Mastenbroek for more than 30 years, puts it this way: "Currently, it's all about drainage. Our machines are helping bring previously unviable farmland into production in India, Croatia, Holland, and other nearby European countries." He adds, "Our machines are designed for specific jobs and to do those jobs a better, more environmentally friendly way. In reality, we are selling the ability to drain this field, put that pipe in, dig this trench."

Mastenbroek’s designs are composed of thousands of parts, as many as 35,000 in some cases, and the company has always relied on Autodesk Inventor to manage the enormous assemblies. Recently, however, designers discovered that upgrading to professional graphics cards took their productivity, design quality -- and the company’s sales potential -- to a new level.

Inventor: Not Just for Productivity
Mastenbroek has been using Autodesk Inventor since revision 4 of the software. Taylor says, "Over the years, this has been of major benefit and not just on staffing levels. With Inventor, you can do a lot more with fewer people, but we don't use Inventor to shorten design times. Instead, we invest as much time as we can to produce high-quality designs to save a huge amount of man hours in the manufacturing process. It is very rare that we build two machines the same, so the more work we can do to make the design complete before we hand it over to make, the less nonproductive workshop hours there are.

"We are always busy, and if we are not working on machines in the workshops, we are working on new designs and on prototypes,” Taylor continues. “We really are pushing Inventor very hard and have always been up there with our use of large models and complex assemblies.>"

Graphics Card Makes the Difference
That, according to Taylor, is why the ATI FirePro V5700 workstation graphics accelerator has proved invaluable. As Mastenbroek has demanded more and more from successive releases of Inventor, designers' efforts were frustrated by graphics card performance issues: extended loading times, irregular motion, and overshoot when using 3D navigation devices to manipulate large models on screen, and slow regeneration of models. "With the FirePro V5700, everything is very smooth indeed -- rotation, panning, zooming. Regeneration speed is a lot faster, and the quality of visualization is a lot better. Not only does the real-time rendered model look better and more convincing, it is easier to see the extent of any projecting external parts," Taylor said.

The time to load and open a particular model in Inventor has reduced dramatically using the complete package of new graphics and workstation hardware, Taylor said. "Loading the full model of our 1012D compact machine, all 5,500 parts, is down from over five minutes to just one minute. Loading the HR-65, all 22,363 parts, is down from eight minutes to less than three minutes. Even the HR 65+, with 27,938 parts, takes just three and a half minutes to load. Overall, we can open a model up to ten times a day, saving up to five minutes each time. We can invest the time saved to make a better design, so for each hour saved in that way, we can save up to six hours’ workshop time." 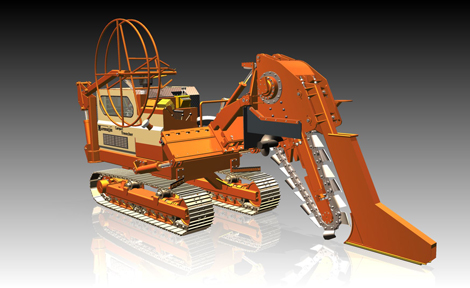 This rendering shows the Mastenbroek 1012D Compact trencher, composed of 5,500 parts. Load time for the Autodesk Inventor model improved from more than five minutes to just one minute after the company upgraded to the ATI FirePro V5700 workstation graphics accelerator. (Image courtesy of Mastenbroek Ltd.)

Design System Becomes a Sales Tool
According to Taylor, Mastenbroek's design office has become "an open house" for customers since implementing the professional graphics cards. "Two or three times a week, a salesman might bring a customer into the design office at any time without notice and will ask to see how the design is progressing. We have the confidence to hold such meetings around the CAD system, show the concept and the design, and make changes there and then with the customer." As a result, he adds, "It banishes the 'we'll have to get back to you on that' response. People lose interest if the visualization is poor and with half a dozen customers looking over your shoulder, the last thing they want to see is a jerky model with slow regeneration. We want the customer to go away with that ‘Wow!’ feeling, captivated by what we do. With the 5700, they do exactly that."

Designs display more clearly on screen as well, Taylor adds. "Lines are a lot crisper and the model does not block out when you rotate it. The amount of data that is being handled has not changed, but the way it is handled is much better. Visually and aesthetically, it is much improved. You get a quality image with no jagged edges, something we can sell from, for a salesman to show a customer in real time. The more realistic and visually appealing the visualization, the more it makes for success. That carries over to the printing, too."

Mastenbroek design engineer Paul Rogers agrees: "Anything that makes my daily design time a better experience, easier on the eye, visually less stressful, makes my day easier and less tiring. The V5700 speeds up the way we can exercise the moving parts. Things don't stagger and stutter, disappear and come back, that sort of thing. The animations are much more realistic, and it is all done within Inventor."

Vista 64-Bit Transition Succeeds
Rogers reports that most of the company's design work is new, so the workshop staff won't have seen it before. "We can now show them exactly what they are going to build. We load a second copy of Inventor so that we can load two models -- the one we are working on and the one we've been asked to show. We may be handing 40,000 parts or more."

The 64-bit version of Windows Vista and the hardware, including the V5700 card, have made this possible, and Rogers is ready to move the other two machines away from Windows XP and onto Vista 64. "I'd have no hesitation. What gives me added confidence is that Microsoft developed Vista 64 on the Athlon X2 7750v that we are using, so it should work well, and it does. What we do is pretty high-end and I'm sure if works for us, there are a lot of people out there who can make the move, too. If someone in a similar line of work were to ask how we did all this, I'd tell them, and I'd suggest they use the V5700 card. It's eminently suitable for our sort of high-end 3D modeling. It's allowed us to push Inventor and push ourselves, too. We never stand still at Mastenbroek."