In the two years since its public beta launch, the fully cloud-based MCAD solution Onshape has undergone a high-speed growth process. What was “a good basic mechanical CAD program” at launch has been built out extensively, and the commercial product is continually adding further capabilities.

That’s been possible because the company implements Onshape updates at a rapid clip — typically every three weeks. Notable features released just since the beginning of 2017 include the capability to edit parts within the context of assemblies, and sheet metal design tools that allow users to work concurrently on flat, folded, and tabular views.

The speed with which customer suggestions and problems can be addressed, in comparison with installed software, is one of the benefits of delivering an application through a web browser, the company says. As Onshape’s Lou Gallo put it shortly after the beta launch, “More often than not, users are pleased to discover their issue has been resolved within six weeks — not within a number of years! Unlike with traditional CAD, which requires every user to know about and install each hotfix, Onshape can push out a hotfix as quickly as 24 hours.”

In addition, because users are accessing a common version of the software, everyone is always up to date. But as welcome as they may be, continual updates to the software capabilities are a double-edged sword, making training an ongoing necessity. Another downside of this model is that customers cannot control the timing of new version implementation by delaying installation until a more convenient moment.

Darren Henry, vice-president of product marketing for Onshape, stressed that customer requests are important, but they are not the only factor guiding the software’s development. “Onshape's Sheet Metal design tools were one of the most requested enhancements from our customers and would-be customers,” he told Cadalyst. “It was always a key part of our road map, but it's important to note that ‘filling holes’ is not the goal of our development team.

“As for our product development priorities, Onshape's team simultaneously follows its long-term roadmap and shifts short-term priorities based on the feedback of customers in every three-week sprint cycle. … Our long-term roadmap for full-cloud CAD is a direct response to the many pain points of traditional CAD.”

In contrast to software that restricts users to designing sheet metal parts in a single mode, Onshape displays all three representations (flat, folded, and bend table) at the same time, and when users edit one view, the other two are automatically synced with it. “We're always aiming to do CAD better,” said Henry. “By offering the first sheet metal design tools with simultaneous and synchronized flat, folded, and tabular views, Onshape helps manufacturers identify and resolve problems quicker, ultimately reducing wasted time and scrap.”

Lana Saksonov, project leader on Onshape’s Sheet Metal team, said, “Having the flat view available simultaneously with the folded view lets the designer see the manufacturing impact while he or she is still modeling. So if you pick bends in the wrong place, it will show you why the flat pattern won't work or why it is not optimal.”

In addition, users can change model parameters, such as the radius or order of bends, from a bend table view while preserving the original design intent. “No other CAD system offers the ability to edit this information in an easily accessible table view,” claimed Onshape.

“We know a lot of users out there were interested in sheet metal for a long time, it was our most-often-requested feature; our top priority for a long time has been sheet metal,” said Onshape’s Cody Armstrong. “This has been one of the most highly anticipated enhancements requested by our customers,” confirmed Scott Harris, vice-president of product definition and user experience. 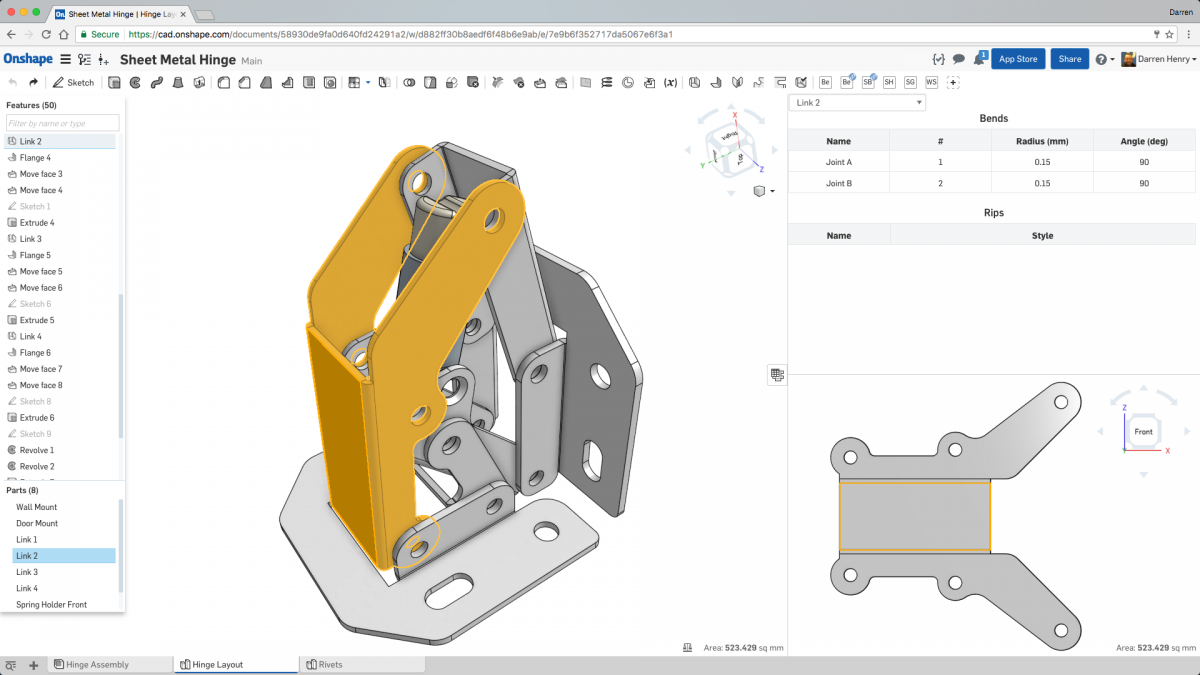 A release in March added bend line generation in sheet metal flat views and in drawings, as well as the ability to move a model's face up to another face, edge, or vertex. According to Henry, the latter is “an extremely useful capability, especially when creating sheet metal parts.” The capability to import a bend table into a drawing is on Onshape’s “to-do list,” according to Neil Cooke, director of technical marketing, and will be added in a future release.

The sheet metal announcement followed on the heels of an update the company termed “extremely significant”: in January, Onshape introduced the capability to edit parts within the context of assemblies.

According to the company, traditional approaches to top-down design “have not largely been successful,” because associated parts and drawings do not update smoothly when an assembly is modified. Instead, complex relationships stored in multiple files produce unexpected geometry changes when those relationships are recalculated. “Updates are unpredictable, features become corrupted, and what you thought was a real timesaver ends up costing you in terms of both time and, if you’re unlucky, lots of scrap parts,” said Cooke.

In Onshape, in contrast, models always update predictably; parts do not automatically update when users move assembly components to test their motion. When users choose the edit-in-context option, the software takes a “snapshot” of the assembly, called an Assembly Context, and preserves it in the Onshape database. This serves as a permanent record of the state of the assembly, so users can choose to reflect recent modifications or not.

To learn more about Onshape updates as they’re launched, visit the Onshape blog.