The new cloud-based 3D software is notable not for its MCAD capabilities, but for its fresh approach to collaboration, file management, and licensing.


A recent Cadalyst survey yielded grim statistics: Nearly 80% of surveyed CAD users admit their organizations rely on e-mail to share and collaborate on CAD files. The second and third most-used methods were shared folders on a server (72% of respondents) and an FTP site (47%). To put a point on it, the vast majority of CAD users in this survey rely on 25-year-old technologies to enable design collaboration.

That would be perfectly acceptable — if these technologies did the job. After all, we still drive automobiles, which are an old invention. But only 15% of respondents in the Cadalyst survey claim to not be experiencing “significant issues” with file collaboration. And that's no surprise, since all three of these methods require manual intervention for tracking and maintaining file versions, and the first two put a strain on bandwidth and storage resources.

Meanwhile, these same CAD users can pull out a smartphone and create an instant “collaboration team” to decide where to meet after work. Their banking information is only a couple of screen taps away. They can cocreate text files or spreadsheets in Google Docs without breaking a sweat. Why can't CAD file collaboration and management be that easy? 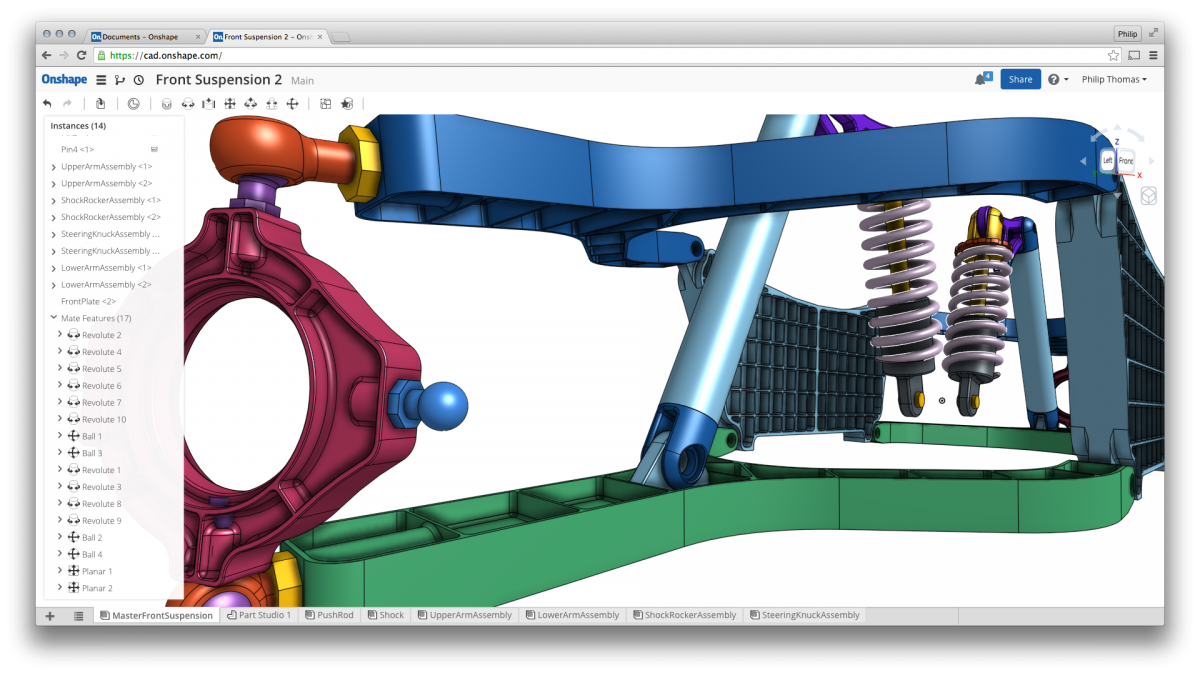 Onshape is new cloud-based MCAD software that runs in a browser. Image courtesy of Onshape.

Of course there are solutions on the market to address this abysmal state of affairs, but despite years of hard work, vendors have only reached a small portion of the addressable market for CAD data management. If ever an industry needed a knight in shining armor — or perhaps someone to drag it kicking and screaming into the 21st century — it is CAD-based design collaboration.

The timing couldn’t be better for Onshape, a brain trust assembled by an industry legend, SolidWorks cofounder Jon Hirschtick. He created the company in 2012, bringing together notable veterans not only from CAD development but also from the cloud software industry. They worked under a cone of silence for more than two years, unveiling their answer earlier this month. The eponymous Onshape product is a completely cloud-based CAD solution that runs inside a browser with no downloads required (with a caveat, which we will explain). It offers a novel approach to a very specific discipline — mechanical design — and it does so in a way that presents a significant challenge to the established order in CAD.

There are many compelling features in Onshape, but the most striking benefit is the ability to share designs worldwide without the friction of current IT practices and technologies. Onshape eliminates the problems related to multiple versions, authorized access, and the risk of compromised security inherent in typical file-sharing schemes.

Onshape Documents may be public or private; Document creators may invite anyone to participate in a Document at any time. Engineers on opposite ends of the country — or opposite sides of the globe — can work in the same Document at the same time. Onshape uses color coding to identify which user is working on specific features. There is no separate user interface for sharing or collaboration.

Data management is ongoing, and mostly invisible. There is no Save button; as in Google Docs, the software continually saves as data is entered or changed. Each tab has its own Undo list, and Undo can be performed an unlimited number of times. Any previous point in the design history can be saved as a named version, a read-only snapshot in time of the document. The Share button enables the addition of new users at any time. The work of all users is saved simultaneously, and changes are visible to all users in real time.

A new part can be created in a manner familiar to users of existing MCAD products. In the Parts Studio toolset the user can sketch on a 2D plane and extrude to 3D, or start with basic 3D solids and reshape. Constraints are automatic; dimensions can be added at any time. The tool set for part design is familiar, but there are modern enhancements. Commands including Extrude, Revolve, Mirror, Join, Fillet, Chamfer, and others, including various Boolean actions, all can be used on multiple instances at once. 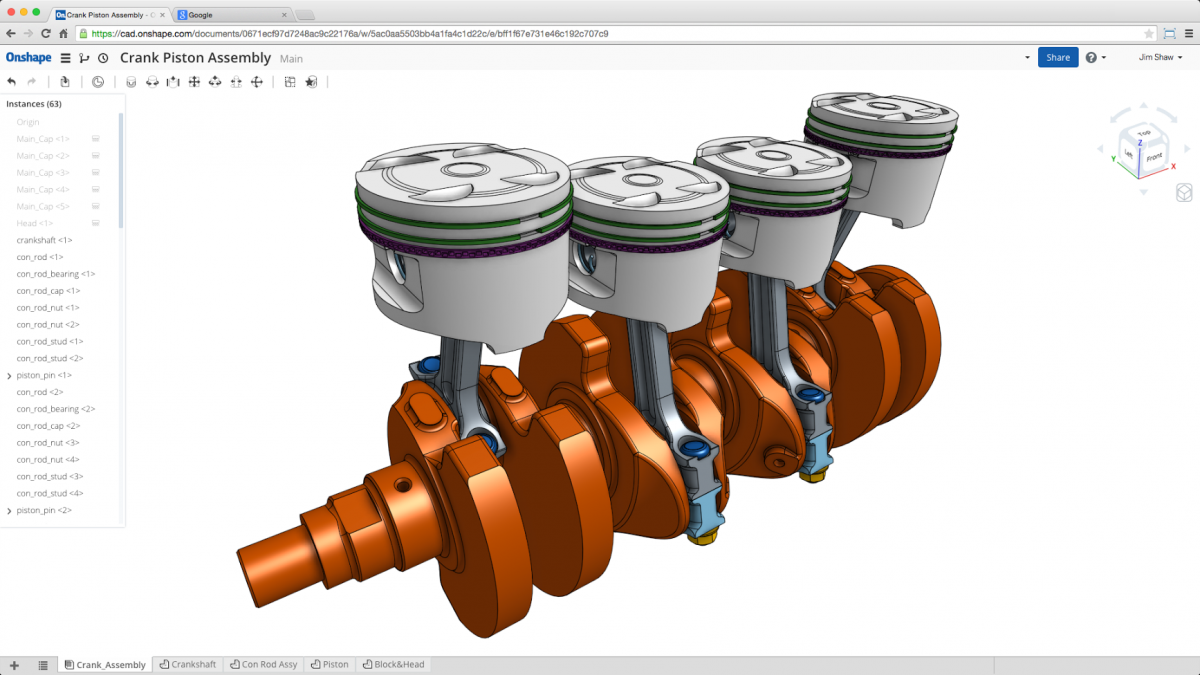 Onshape says the process of creating assemblies from parts uses one-third fewer steps than it does in comparable desktop CAD products. This Onshape model was created by Jim Shaw.


Building assemblies from parts is not done in a separate space, but in a tab of the open Document. Onshape has simplified the process of identifying parts for an assembly: identify matching faces and Onshape solves mating issues. As with creating parts, users can collaborate in real time to create an assembly. Onshape says its approach to building assemblies requires one-third fewer steps than with comparable desktop CAD systems, and we concur.

Onshape uses the same up-to-date interoperability kits that all leading MCAD products do, and it can import models from those products into an Onshape Document. Once uploaded, this data can be revised as if it were drawn natively in Onshape, and data from imported models can be shared from one design to another. Export from Onshape is done using neutral formats (IGES, STEP, Parasolid). Because all the work of conversion is done in the cloud, with its infinite computing resources, Onshape users can bulk-load several CAD files to import and continue to work on a part while the other files upload in the background.