In the world of biomimetics, scientists and engineers model their creations after living creatures.


Biomimetics, in its most basic form, is the imitation of systems and elements that have evolved in nature to help solve complex problems. When it comes to design, nothing can top nature — and rightfully so, as It has had roughly 3.8 billion years to get plant and animal life to where they are today. Consequently, many scientists, researchers, and engineers use those well-honed designs as inspiration in their efforts to make robots and other devices more functional and efficient.

A prime example is aircraft wing designs that are inspired by birds. Soon-Jo Chung, an assistant professor in the University of Illinois Aerospace and Engineering Department, and his colleagues seek to better understand birds' flight characteristics. Their findings could lead to applications such as specialized drones and aircraft capable of vertical landing, beyond what planes like Lockheed Martin’s F-35B are capable of today.

Chung and his colleagues are developing a robotic bird that closely mimics the way our avian friends fly. Ornithopters — aircraft that flap their wings for flight — have been around since the late 1800s. Their mechanical wings, however, can't compare to the more sophisticated wing morphology and angling capabilities that allow birds to maneuver in flight, glide, and stall so they can dive for prey and land gracefully. "The robotic falcon we are developing will leverage the modern advances in materials, batteries, and electric actuators to construct the most sophisticated engineered flapping motions that anyone has tried," said Chung.

It is not uncommon for robotics researchers to consult with biologists and zoologists to get a better understanding of the functions they wish to emulate. Chung and his team took inspiration from prominent bat researchers Sharon Swartz and Kenneth Breuer at Brown University, who have designed a robotic bat wing that functions uncannily like its biological counterpart. 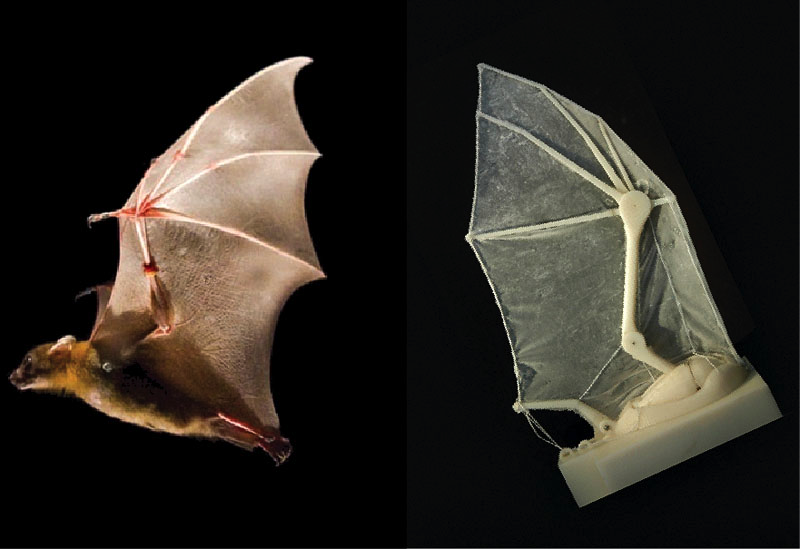 The 3D-printed robotic bat wing uses motors and cable-linked joints to emulate the flapping motions of a dog-faced fruit bat.


Instead of muscles, bones, and tendons, the 3D-printed robotic bat wing uses three motors, seven joints, and a series of cables to function like a dog-faced fruit bat's wing. The robotic wing features a silicone elastomer that’s stretched over the structural framework to simulate the bat’s skin and provide lift. The joints are actuated by servomotors, which pull on the cables, which in turn pull on the joints to simulate wing movement.

Because the robotic wing is capable of folding and expanding just like the real thing, it can provide insights into the flight capabilities of bats. Swartz and her team conducted initial tests by suspending the wing, connected to force transducers, in a wind tunnel to measure the forces produced by the wing articulation. These included lift, thrust, the force needed to counteract gravity, and the force needed to propel the bat forward. The data collected from Swartz and her team is what inspired Chung, as understanding those mechanics could translate into micro–aerial vehicles (MAVs) that could be used to carry small pieces of equipment, such as cameras, to locations that are otherwise inaccessible or are too hazardous for humans. The research also helped Chung get insight into using fully articulated wings for precision flight mechanics, including the ability to perch upon landing.

When it came to the design of the falcon, Chung's team turned to CAD modeling, electrical design, and simulation tools to get the job done. "We do utilize [CAD software] as much as possible … this allows us to have multiple people working on subcomponents without worrying about interface issues, such as software interoperability, and use top-down approaches to maintain solid dependencies within and across iterations," stated Chung.

Many engineers rely on CAD software that incorporates some type of simulation functionality to help verify the design models. Simulation software tools allow researchers to test particular aspects of their designs — such as motion paths, fluid dynamics, and durability — without creating costly, time-consuming physical mockups. They also enable direct simulation of model interactions, product performance, and other functions when new parts are introduced, allowing for a redesign of the part or system on the spot, making the design process more efficient.

About the Author: Cabe Atwell