In the world of biomimetics, scientists and engineers model their creations after living creatures.


From Sky to Sea

Biomimetic robots are as diverse as their biological inspirations, which include everything from insects to fish. Boston Engineering’s BIOSwimmer unmanned underwater vehicle (UUV), for example, is a robotic tuna. Like Chung's robotic falcon, the BIOSwimmer was designed to mimic the locomotion of its biological counterpart. Its flexible tail houses a series of actuators that help propel the fish forward. In addition, the tail works in tandem with the dorsal and pectoral fins to enable precise maneuverability in confined areas. The fins are modular; different fin layouts can be swapped onto the body, depending on the task at hand. The UUV also includes sensors for object detection and a communications suite, which can be controlled and monitored using a laptop. An onboard computer enables autonomous navigation; the tuna can also be piloted remotely.

The robotic fish is still undergoing testing; it's currently in Stage II of the Small Business Innovation Research (SBIR) Targeted Technologies Program funded by the Commonwealth of Massachusetts. Although it is being developed for the Department of Homeland Security, BIOSwimmer is expected to have a variety of uses. Michael Rufo, director of Boston Engineering’s Advanced Systems Group, stated that BIOSwimmer’s unique design gives it "broad commercial and homeland security applications that include inspecting ships, securing ports, and conducting marine maintenance operations." 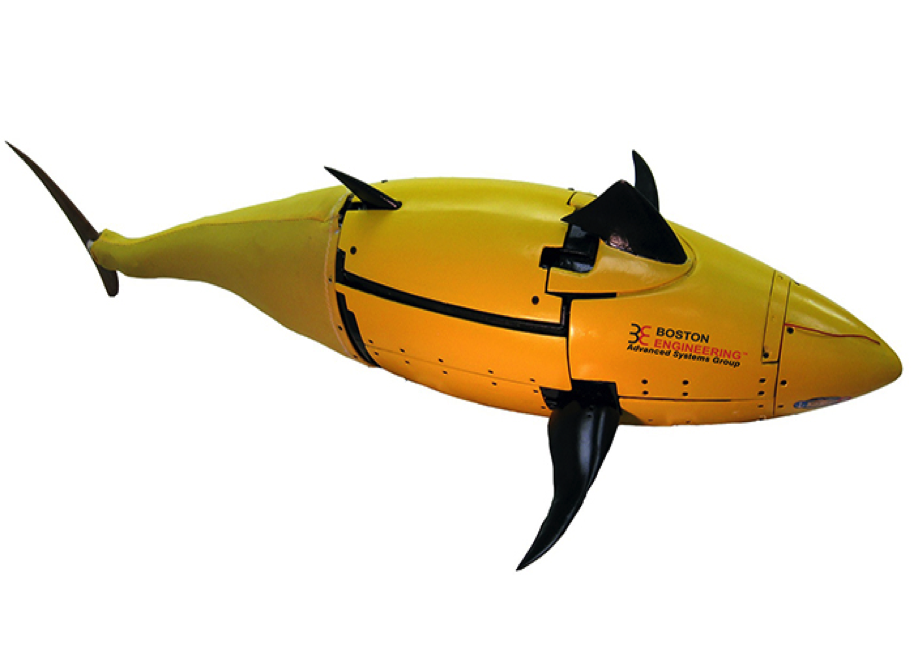 Boston Engineering’s BIOSwimmer, developed for coastal security, mimics a tuna in its shape and locomotion.


When it came to the design inspiration for the BIOSwimmer, the development team went straight to the source. "We used an actual tuna that was caught off of the Massachusetts coastline for this project. We scanned the tuna using a coordinate measuring machine (CMM) laser scanner to create the initial CAD model," said Rufo.

The CAD model was produced in PTC Creo, which was used during each stage of BIOSwimmer’s development, from modeling to engineering analysis, and for proposal requirements to generate cost figures as well. PTC Creo Simulate was used to test the various parameters of the UUV’s design. "The cohesion among PTC’s tools enables us to perform effective product development across all lifecycle stages and to do so effectively and successfully," stated Rufo.

In addition, the team used PTC Windchill for product lifecycle management in every phase of the project; MathCAD for parametric modeling and calculations; and Stratasys Fortus and Dimension 3D printers for rapid prototyping. "We created many components via rapid prototyping to simplify the creation of complex shapes and cross sections associated with this project," Rufo explained.

The Future of Biomimetics

Commenting on what the future holds, Rufo believes that the merging of nature’s inspiration and robotics will continue — and not just at the system level. “Subsystem components that can leverage biological inspiration will likely be more prevalent and increase in maturity," he explained. "This includes actuators, CPUs, and even software algorithms.”

Rufo further noted that “biological inspiration has already become commonplace in developing technology when you consider activities as common as computers in 'sleep' mode, 'viruses' on computers, and sonar on UUVs (from bats and dolphins)." If we take a closer look at items and objects that some of us use on a daily basis we can clearly see nature’s inspiration found in those designs as well, including camouflage, infrared sensors, and even Velcro, which mimics the way some plant seeds attach themselves to animal fur.

Today, specialized 3D printers are being developed that will allow doctors to manufacture replacement organs. Robotic limbs that function much like their biological counterparts can now be custom-made for amputees and individuals with birth defects. It took nature millennia to develop the perfect blueprints for biological life, but technology’s advancements are rapid, and evolve over shorter periods of time. Will technology eventually surpass nature and make biology obsolete, or will the two merge further? Only time will tell, but one thing is for certain: biology and nature still rule the design world.

About the Author: Cabe Atwell