It was on a racetrack in the German city of Hockenheim that a team of bright young engineering students from Berlin demonstrated that 3D printing is not just for prototyping. The Formula One city is also home to the annual Formula Student Germany international racecar design competition. The team in question, FaSTTUBe (Formula Student Team, Technical University of Berlin), used an HP Designjet color 3D printer not only in the modeling phases of its car's design, but also in the production of some of the car's final parts, helping to secure for the University the prize of Best Prepared Car for Scrutineering.

Formula Student is a competition that helps shape and inspire new generations of engineers. It provides students in universities around the world with practical experience and skills for use in a wide range of industries. A total of 76 teams from 18 countries took part in the 2010 German edition, which has links to Formula Student in the UK, and Formula SAE in the United States and Australia.

"We don't have much time on our hands," said Nils Schaupensteiner, a third-year student and project manager for FaSTTUBe. "A new racecar has to be designed every year, and we have only six or seven months to develop the whole car. We produced all of the components of the car's air-intake system in ABS plastic using the printer. The geometry of these parts is very complex, and normally it would take a lot of manual steps and processes to make the system. With the printer, we were able to do it in a matter of hours."

In addition to the air-intake system, the team also 3D-printed parts such as boxes, covers for electronic components, and cable bridges. "We raced the car containing these parts on many test tracks and in Hockenheim," said Schaupensteiner, "and the parts withstood the temperatures and stresses endured." 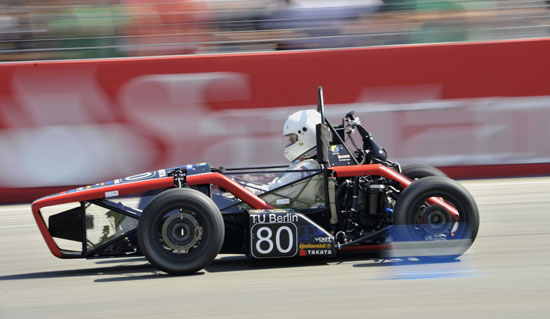 The FaSTTUBe team used 3D-printed parts to prototype designs and to help build their entry in the Formula Student Germany racecar design competition.


FaSTTUBe also saved time by running the HP Designjet without team member supervision. "It took only a very short time to learn how to transform CAD drawings on our screens into physical plastic parts in 3D," said Schaupensteiner. "We printed various parts in one go, and the software automatically arranged them for the best use of space inside the printer. We just pressed start, and a message told us the time the models would be ready. When we came back, all we had to do was take them apart."

During the design phase, FaSTTUBe also made more traditional use of the 3D printer by building prototypes of other car parts, such as the steering wheel. Although the final parts in this case were manufactured using other processes, the functionality of the prototypes was crucial in speeding up development.

"With the 3D prototype, we were able to test whether the steering wheel's design really was as good as it appeared in the CAD software," said Schaupensteiner. "We printed the model and were able to do ergonomic studies on it, fitting it to the car and getting the driver to test the feel of it. We used his feedback to alter the design and went on to manufacture the final wheel."

The HP Designjet Color 3D Printer can produce parts in any of eight colors of recyclable ABS plastic. Various colored parts can then be assembled to produce a multicolored model. For the aesthetics of the racecar, FaSTTUBe opted to print all components of the air-intake system in black. The team also printed a copy of the system for Euromold (World Fair for Moldmaking and Tooling, Design, and Application Development) in Frankfurt, Germany, in December 2010, with some components in black and others in an ivory color to help visitors understand how the system worked.

A copy of the air-intake system was 3D-printed in two colors for display at the Euromold exhibition.


"A lot of engineers came by the booth asking, 'What is that?'" said Schaupensteiner. "They hadn't heard of the 3D printer. They were very impressed when they saw how easy it was to build so complex a geometry."

For the new academic year, design of a new car is underway at FaSTTUBe. HP is assisting the team by again providing free use of an HP Designjet Color 3D Printer and supplies, and there are plans to increase the number of 3D-printed parts on board the car in the Hockenheim 2011 race.