Transition from 2D to 3D Design Hasn’t Been a Clean Break for Most, Study Finds


In today's product-development environments, 3D models play an important role in design as well as the overall development process — there’s little doubt about that. But how far have we really come in the adoption and use of 3D data for product development? In a recent study, I set out to answer that question, examining design data interoperability, model-based enterprise initiatives, and the use of 3D models off the critical path. My findings, based on 800 survey responses, are outlined in the 2013 3D Collaboration and Interoperability Report, now available to the public. Here's a peek at some highlights of the report.

Want to know a bottom-line statistic about design data interoperability?

Fully 49% of the respondents to the survey stated they spent more than four hours a week fixing design data — that's at least two days lost every month. That time is spent in simply getting a closed volume, ensuring the 3D model accurately reflects the intent of the original design, and modifying the geometry to represent revisions that the engineer wants to make. Note that none of these activities is actual design work; they add no value to the project. 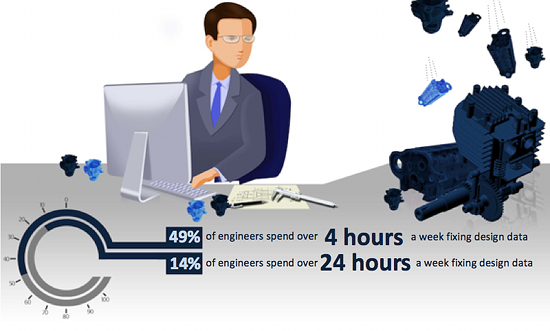 Model-based enterprise (MBE) initiatives are progressing in the manufacturing industry. Nearly two in five respondents stated they are embedding product and manufacturing information (PMI) — which captures non-geometric information such as GD&T, surface finish, and more — into their 3D models.

This progress, however, isn’t because manufacturers are pursuing the potential business benefits of the practice. Some 78% of those companies that are embedding PMI into 3D models are contractually required to do so.

Suppliers are no longer just responsible for delivering physical items such as systems and components. They have to hand over model-based deliverables. Whether such deliverables are considered digital intellectual property or just documentation is in the eye of the beholder.

Transition from 2D to 3D Plus 2D

In the past decade, a dominant theme in the CAD market has been the move from 2D drawing to 3D modeling. That rhetoric, however, has never quite translated into dropping one for the other. Most engineering organizations certainly design their products in 3D. However, downstream departments use 2D drawings at a much higher rate than they use the 3D model directly. Even when downstream departments do leverage a 3D model, they do so alongside a 2D drawing.

A nuanced finding from this study isn't that organizations used 2D or 3D to the exclusion of each other. They aren't forgoing 2D for the sake of 3D; they're adding 3D while continuing to use 2D.

For more information about these and other survey results, download your free copy of the 2013 3D Collaboration and Interoperability Report today.

About the Author: Chad Jackson