Autodesk has updated its lineup of AEC solutions for building information modeling (BIM) with the launch of Revit 2017, Civil 3D 2017, and enhancements to InfraWorks 360.

“Our focus for this release was around how we can improve efficiency for designers and engineers when they communicate and model their designs with Revit,” said Harlan Brumm, Revit Product Manager, Architecture & Construction. That efficiency extends to the software family itself: instead of separate titles for the various disciplines, Revit now comprises architectural, structural, and MEP functionality in one product (the pared-down version, Revit LT, remains focused on architecture).

Making modeling more efficient. The company’s goals for modeling improvements included encoding more design intent in the model, increasing the level of detail (LOD), and providing better support for fabrication, Brumm explained. To that end, the 2017 release has 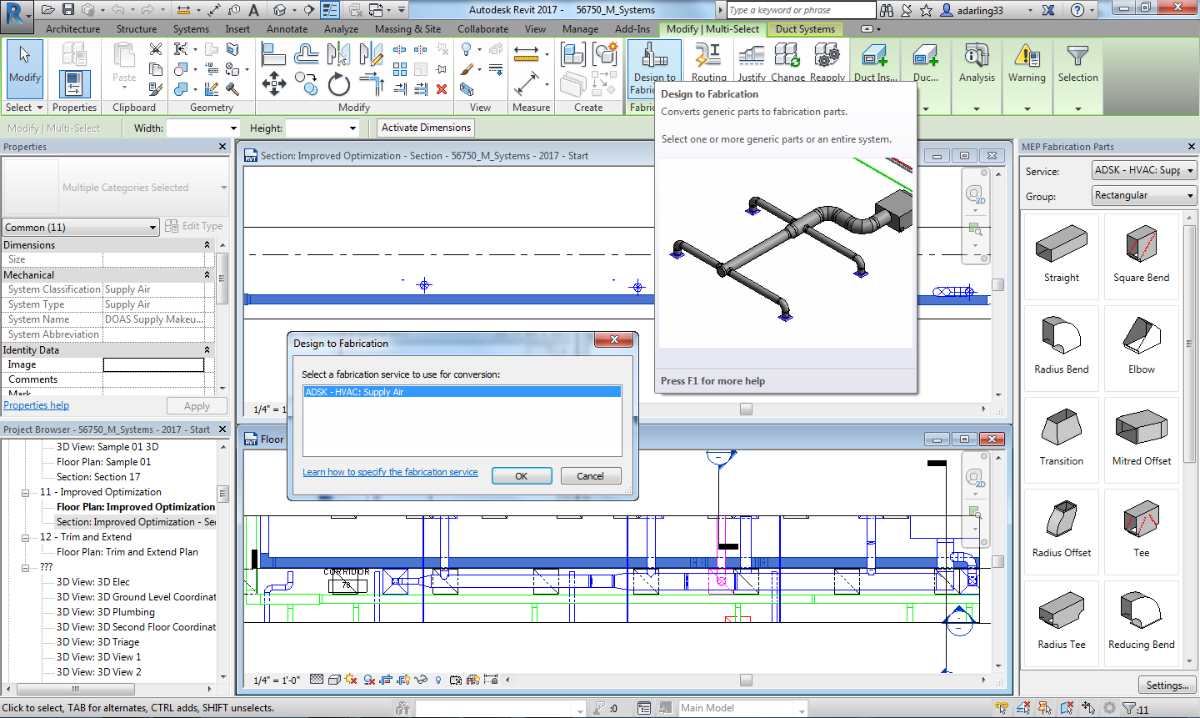 
Communicating design intent. Autodesk Raytracer, introduced last year, is now the only rendering solution in Revit — mental ray is no longer part of the product, said Brumm. “This new rendering engine really is all about performance,” he commented. “It provides really fast rendering and visualization, and very accurate physically based lights and materials as well.”

Another tool to improve visual communication, depth cueing, enables users to create depth in elevations and section views “in a single button press,” said Brumm. “It’s something we know our customers have been waiting for, for a long time.” 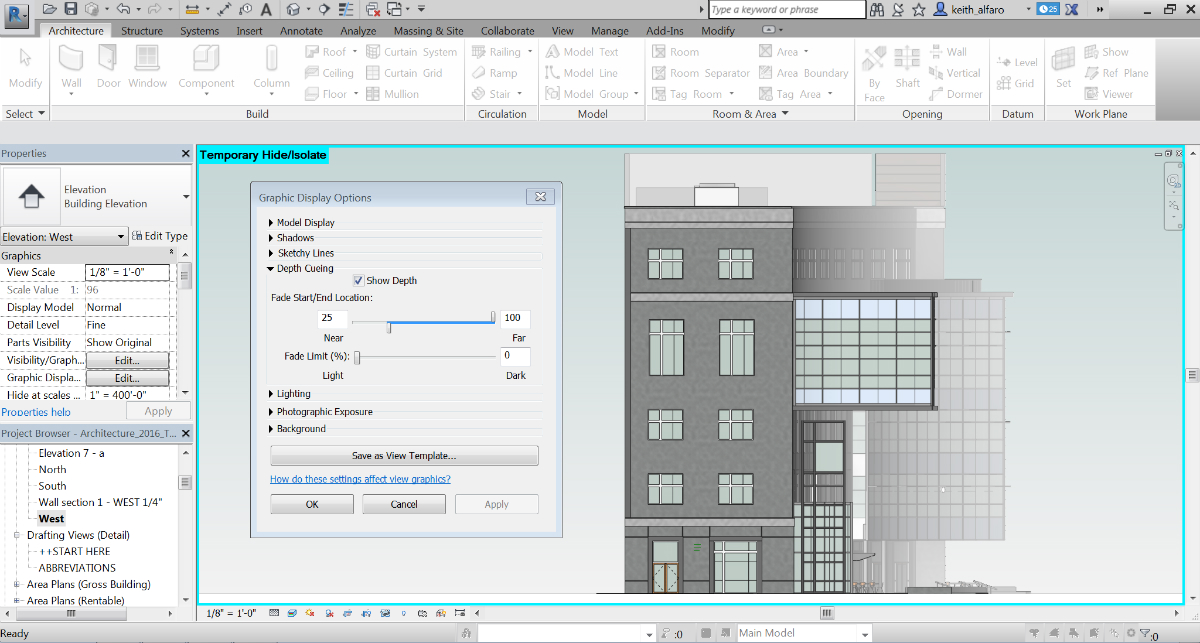 With depth cueing, users can add depth to elevations and sections to better communicate their designs. Image courtesy of Autodesk.


To help users collaborate globally, cloud-based worksharing functionality is now built into Revit, courtesy of the Autodesk A360 Collaboration for Revit service. Although this functionality still requires a separate purchase, “every customer will have access to it without having to install anything additional,” Brumm explained.

Speeding performance. Brumm noted that with improved view navigation for large projects, “navigating, panning, orbiting, and zooming is much more comparable to tools like Navisworks, which was really great, and now Revit has that same functionality.” Making better use of the graphics processing unit (GPU) and smarter processing of data in the background improve software performance 30-40% on big projects, he stated. Occlusion culling, which omits the elements of a view that are hidden from the viewer, yields view refresh rates and user navigation speeds that are up to 4.5 times faster than previous versions of the software, Autodesk asserts.

Autodesk has published a comprehensive list of new features and enhancements in Revit 2017 here.

Efficiency is also the goal for updates to InfraWorks 360, which is Autodesk's preliminary engineering and design software for infrastructure projects. “You’re getting the design you want and you’re doing it quickly,” said Civil Community Evangelist Eric Chappell, referring specifically to the greater complexity — merges, diverges, weaving lanes — now possible in designing intersections and exchanges.

More design context. A new method of processing terrain data and an updated cache of OpenStreetMap vector data in the Model Builder tool provide more detailed surroundings for models of infrastructure projects. “The terrain, the shape of the earth, is more accurate than ever before when using Model Builder,” said Chappell. “The advantage of all this? More robust context, more confidence in the accuracy that you’re designing on top of — and that’s going to make everyone happier.”

Chappell also touted the potential of a new DWG overlay functionality: “This is a huge feature … maybe the biggest news in the entire release.” Because most InfraWorks 360 users are also AutoCAD or Civil 3D users, Chappell noted, they have lots of DWG files that they want to use in InfraWorks in a quick, easy, manageable way — “they’ve been begging us,” he said. Now, they can easily drape a DWG file over an InfraWorks 360 model, with full control over location, scale, rotation, opacity, and display order. “The big benefit here is being able to show that readily available CAD data that everyone has lying around, that they can now just drag and drop into the model,” said Chappell. 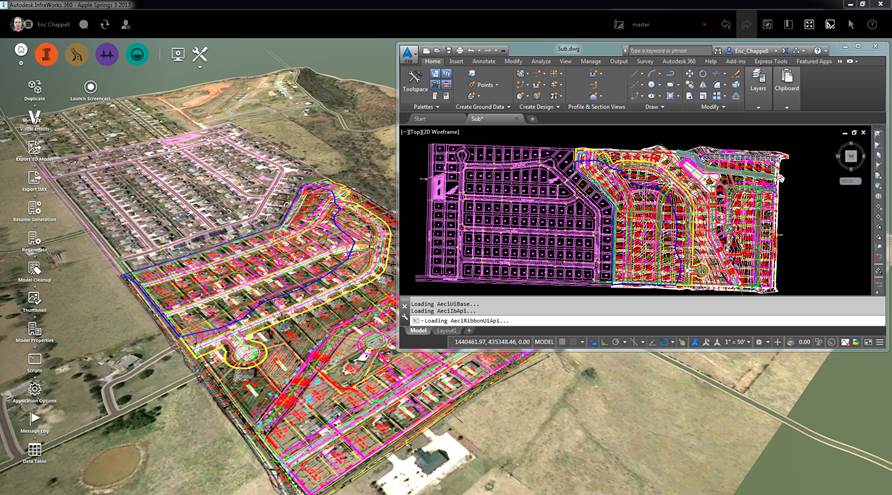 The ability to drape a DWG over an InfraWorks model can help users model more accurate designs in a real-world context. Image courtesy of Autodesk.