The Revit Technology Conference showcases technologies and workflows that give AEC users a better look at their projects, both as they are now and as they will be in the future.

The Revit Technology Conference (RTC) Australasia 2014 comprised close to 100 presentations, hands-on labs, and social events. As befits an event focused on building information modeling (BIM), many of the technical sessions showcased tools that give users a clearer view of AEC projects. From spotting clashes before they cause problems to giving investors a look inside a building that doesn’t yet exist, professionals are always trying to see projects’ present status — and future development — more clearly. 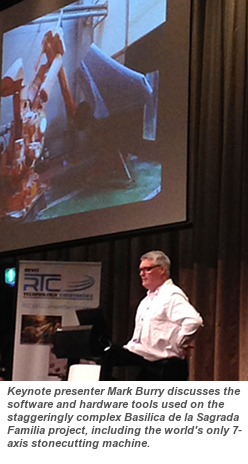 The keynote address explored the work of a man who had a superhuman ability to envision complex, unique designs without the help of modern hardware or software: architect Antoni Gaudí. His otherworldly Basílica de la Sagrada Família, which has been under construction for more than 130 years, looks like no other structure in Barcelona, Spain — or anywhere else, for that matter. “It’s now seen as the leading project for building complexity … and I think it’s the perfect case study for BIM,” said keynote presenter Mark Burry.

Burry, a professor and director of RMIT University’s Spatial Information Architecture Laboratory and Design Research Institute, has been helping carry on Gaudí’s work for 35 years. When he first visited the building site in 1979, the only solid clues to Gaudí’s plan were plaster models — all of them shattered. But in the intervening decades, Burry and his collaborators have employed modern hardware and software tools to reconstruct and expand upon that original vision. “Because we have new tools, we can do things Gaudi couldn’t do himself,” such as combining multiple parabolic surfaces, Burry explained. “We were the first architectural project in the world to use 3D printing,” he noted.

Those modern tools are also helping accelerate design and construction, making the goal of completion in 2026 seem feasible, despite the complexity of the work. For example, creating an arched colonnade of fantastically twisted, tilted, asymmetrical, 6-meter stone columns seems a daunting design challenge — but a parametric model made it manageable. “If you change anything, it ripples through the whole model,” said Burry.

Although his own mind handled architectural complexities easily, Gaudí sought to create a common language that everyone involved with a project could understand — to “use geometry to explain to the people you’re working with what something is and how it might be made,” in Burry’s words. And he found that language in “surfaces that are described easily through straight lines in space,” said Burry. “Parametric design,” he explained, “is not something that’s just emerged through software.”

Getting a Good Look with Lasers

In this century, however, AEC professionals are heavily reliant on software — and if BIM is to serve as a central hub for a project, users must first get project data into the system. For existing structures and projects under construction, laser scanning is an increasingly popular way to gather that data. “It’s kind of easy … compared to pretty much every other method of capturing information and bringing it into your project,” said Kelly Cone, innovations director at the Beck Group, during his session “Laser Scanning to BIM: Getting from Dots to Plots.”

Of all the measurement technologies that “get the real world into BIM,” said Cone, laser scanning is especially suited to AEC applications because it reduces chain error, captures all the details of a project at once, and is relatively quick and inexpensive. In addition, the typical accuracy of a stationary scanner is +/- 0.25 in., which fits into the tolerances common in AEC projects, he explained.

Laser scanners also provide 3D digital output of data, yielding models that are immediately comprehensible. “It’s a very intuitive way of understanding an as-built condition,” said Cone. “You don’t need a lot of technical knowledge to understand what you’re looking at.” However, he cautioned, “Models are always less accurate than the scan data, because models are always an abstraction.” Cone warned his audience against using the sequential method of culling points (also called data decimation), which strips out too many data points from the areas farther from the scanner.

The technology does have its weak points; shiny, reflective surfaces and transparent substances, such as glass and water, yield bad data. Another consideration is that laser scanning produces very large files, which require local storage for quick response times, Cone explained.