Catching Up with Solid Edge

Event report: At Solid Edge University 2016, Siemens PLM talks about what's happening, and what's ahead, for the 2D/3D CAD software and its users.


If you’ve been following the CAD software market for any length of time, you’ve likely heard folks refer to the technology as mature — that is, it has moved beyond any opportunity for significant improvement, comfortably planted on a technological plateau like a retired person in a La-Z-Boy.

Well, CAD vendors would beg to differ. One in particular is Siemens PLM Software, developer of Solid Edge, NX, and numerous other product-development tools. At Solid Edge University 2016 (SEU) in Indianapolis last week, John Miller, senior vice-president, Mainstream Engineering Software at Siemens PLM Software, told the 500 users in attendance, “I don’t think this market is done. I think there’s all kinds of room for innovation.”

An innovative push into the future requires a leader, and Siemens PLM has a new one. Miller introduced CEO Tony Hemmelgarn, who took the helm on October 1, moving up from his previous role as executive vice-president of Global Sales, Marketing, and Services following 15 years with the organization. He replaces Chuck Grindstaff, now the company’s executive chairman.

To bolster its established software portfolio, Siemens PLM has introduced new features such as cloud-based access to Solid Edge and is integrating new capabilities across the product line via recent acquisitions including Polarion (browser-based development of product-embedded software) and CD-adapco (design simulation). 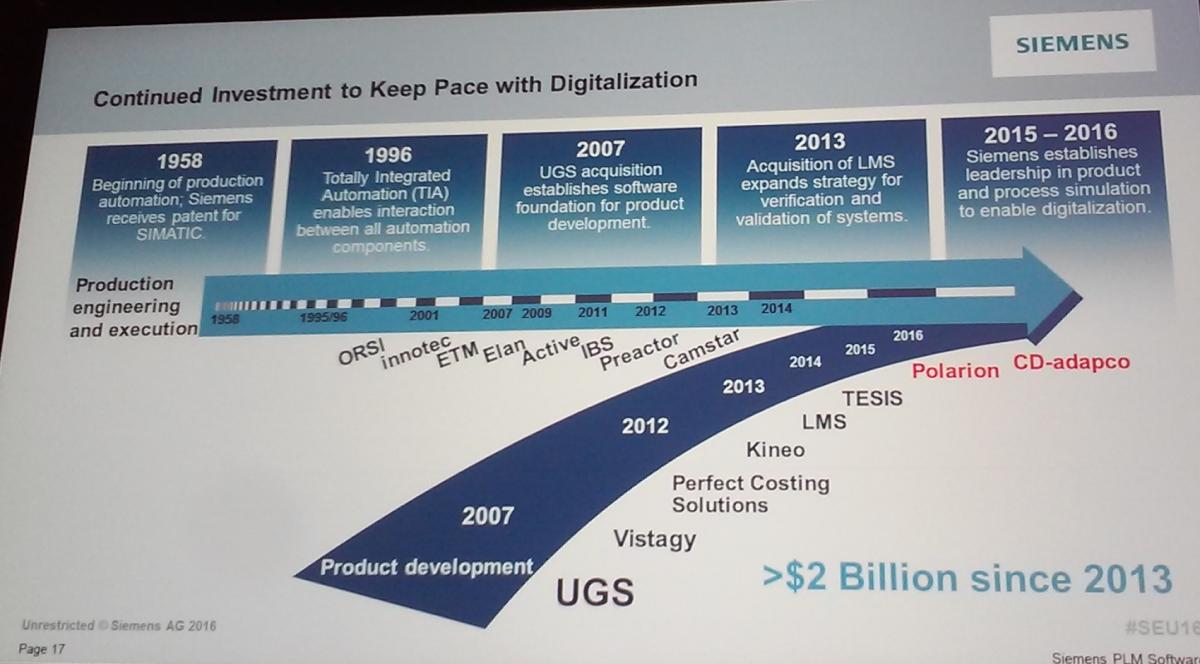 “Over the next 18 months,” Hemmelgarn said, “you’ll see us integrate new technologies across the board in our solutions, to help customers deal with the disruptive forces in the market.” He cited one customer who, thanks to new simulation capabilities, can create hundreds of design iterations in a few days, versus the three iterations in ten days that was the norm using older solutions. 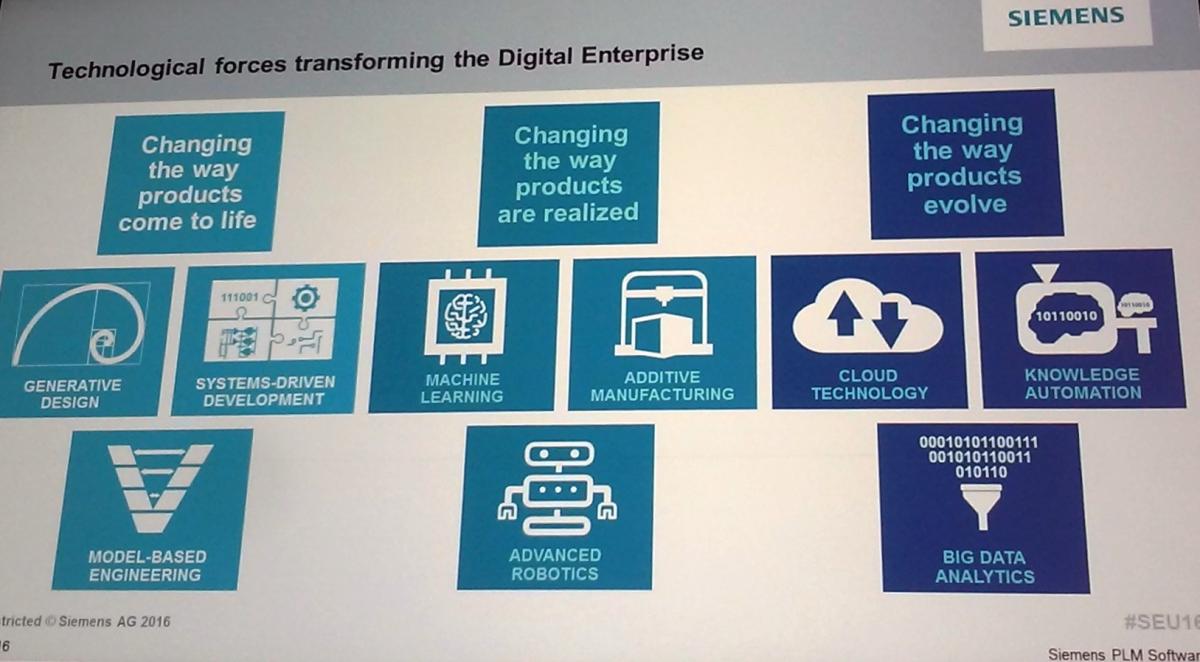 In his kickoff presentation, Miller told the audience that workflow challenges still persist for CAD users “after all these years.” In an industry survey in September, the company found that:

Presumably, survey participants were not Solid Edge users — as that solution is notable for its data translation capabilities; ease of design changes at any stage, thanks to its direct-modeling functionality; and now, the Catchbook app that captures true and refined sketches for export to Solid Edge.

Free Solid Edge for startup companies. Miller introduced a new program, Solid Edge for Startups, which will provide free access to the Solid Edge Premium software portfolio for product development, including 3D design and rendering, simulation, manufacturing, data management, and more. “We’re going to go out and get customers started using Solid Edge Premium design software, using professional tools,” Miller said. The program offers qualifying businesses one year of free access to engineering software and learning resources “to help them quickly innovate and launch ideas, turning concepts into prototypes and prototypes into successful products,” according to the company. It is available now in the United States and United Kingdom, with other countries to follow.

New Catchbook sketching app. “Sketch with a purpose” is the slogan for the Catchbook drawing and tracing app that converts freehand drawings into 2D designs for direct export to virtually any graphic design or commercial CAD system. Introduced at SEU 2015 a year ago and launched this May in two versions (free and $5.99), it works with Android, iOS, and Windows tablets and smartphones. Consumers as well as professional users can sketch a simple idea, just as one would do using pencil and paper, then Catchbook creates precise, to-scale, editable drawings.

Next, Dan Staples, vice-president, Mainstream Engineering, took the stage to walk attendees through the new features of Solid Edge ST9. Although this latest version was launched in June, Staples said, “I want to show you some new ways that you can use ST9, and not just keep using it like ST8 because you’re busy.” Following are some highlights of the new release; see the brochure, What’s New in Solid Edge ST9, for details.

New, optional cloud capabilities provide access to Solid Edge via cloud-based licensing and facilitate deployment, user access and collaboration across remote designs teams — for when you need CAD to follow you wherever you go, Staples said.

In addition to the cloud licensing option, Siemens PLM continues to offer node-locked and floating licenses. Customers can purchase a perpetual license or subscribe monthly or yearly. “It’s all about you choosing, not about us dictating” how you license your software, Staples said, likely referring to Autodesk’s migration this year to subscription-only licensing.

3D modeling updates include an improved user interface “that people seem to actually like,” Staples said. The UI now offers:

The Solid Edge hybrid  modeling experience (a combination of history-based/direct modeling, or what Siemens PLM calls ordered/synchronous) is improved, but continues to allow users to choose which works best at any given time. Specific design improvements include: 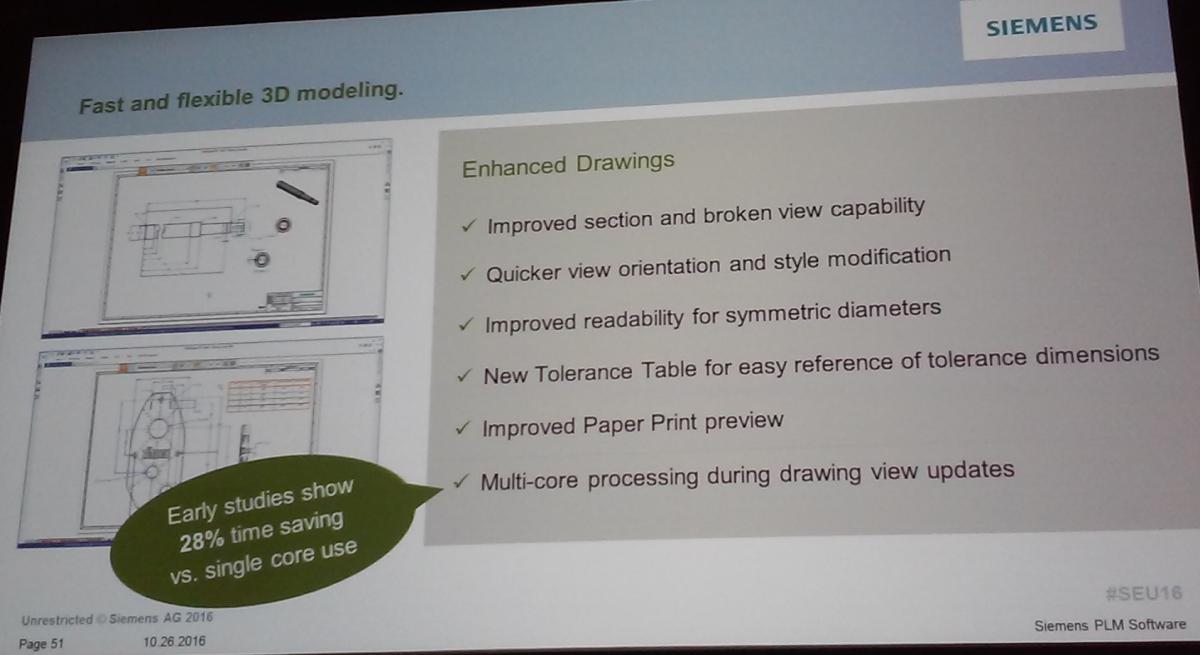 Flow simulation (computational fluid dynamics, CFD) is now embedded in Solid Edge FloEFD from Mentor Graphics. Feeling like an extension of the familiar Solid Edge environment, it runs simulations on native CAD models. “We have this nice utility that will isolate [the fluid space] for you,” Staples said. “Then if you change the design, fluid space will be modified to reflect that” when you run a new simulation. FloEFD can be used in aerospace, automotice, electronics, consumer goods, process and manufacturing, HVAC, and other applications. 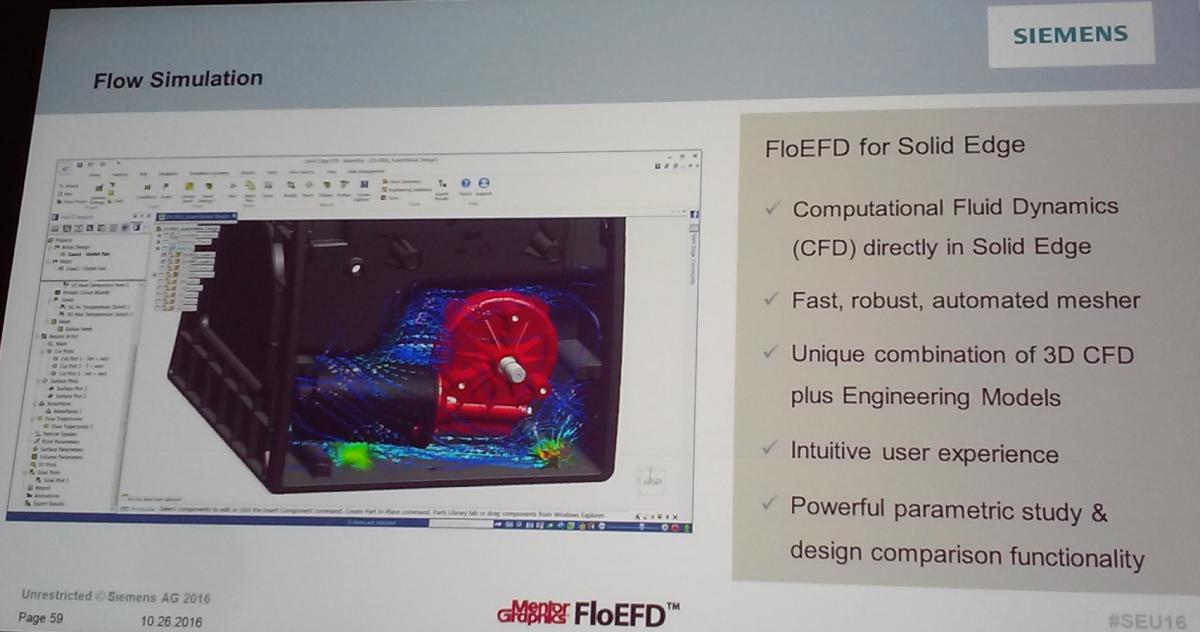 Scalable data management, integrated in all Solid Edge ST9 versions, supports the smallest to the largest companies. Built on standard Microsoft Windows operating system, it quickly scans and indexes file names, file links, properties, and “where used” data for instant search results — as well as easy revision and release management — all without the need for additional software installation and maintenance. Growing organizations can expand to full product lifecycle management (PLM) capabilities via the company’s Teamcenter platform.

Looking Ahead to ST10

At the wrap-up session on Day 2 of Solid Edge University 2016, Jeff Walker, director of Solid Edge Products, gave a sneak peek at Solid Edge V10, due next summer — including reverse engineering (available very soon for beta testing), mesh-based modeling (based on Parasolid), . “This is a small part of what’s coming,” he advised.

This video captures his presentation.