Growth is the Goal at Solid Edge University 2012

In its avid pursuit of more users, Siemens PLM Software is spending more money on development and offering more ways to consume its mechanical CAD solution.


Growth was the unofficial theme of Solid Edge University 2012, held June 11–13 in Nashville, Tennessee. During the general session, Karsten Newbury, senior vice-president and general manager for Mainstream Engineering Software for Siemens PLM Software, reported that the number of attendees and speakers at the conference was double that of the Solid Edge ST4 Global Launch Event held in 2011. Newbury said the company has recognized the value of users meeting with and learning from each other: "It's no longer a question. It's an annual event; we're going to be having this every year."

In addition to burgeoning user event attendance, the company also touted growth in its Solid Edge investments and user base. "In the last couple of years, our development staff has grown by 20% [and] our sales team by 300%," said Newbury. "All of these things are aimed at growing the business and growing the community." In the first half of this year, he continued, the number of Solid Edge licenses in the United States grew by 40%. Tony Affuso, chairman of the board of Siemens PLM Software, said, "If you look at the percentage of growth [in 2011], we outpace SolidWorks and Autodesk."

While actively pursuing traditional licenses, Siemens PLM Software is also expanding its user base through other means. Newbury reported that the free student version of Solid Edge, launched last October, has been downloaded more than 50,000 times. The company also began providing 45-day free trials of Solid Edge last year — an offering which has led to thousands of purchases, said Newbury. In addition, Solid Edge Design1 was rolled out in November to provide members of Local Motors' design community, the Forge, with a low-cost 3D CAD option.

Local Motors' best-known product, the Rally Fighter desert racer, was on display in the Solid Edge University project hall, along with a diverse array of other Solid Edge–based designs. An articulated hospital bed and lunar lander prototype drew attention, but it was the vehicles that stole the show. The Rally Fighter shared floor space with two sleek silver cars, alike only in color: a ground-hugging Formula SAE racer from Auburn University and the aerodynamic, electric VLC from Edison2.


More Hands on the Wheel

Actualizing better vehicles was the focus of a keynote address by Jay Rogers, president and CEO of Local Motors. He envisions a world where design is crowd powered — enabled by community hubs such as the Forge — and manufacturing is carried out in nimble, low-overhead microfactory environments. "It's not another country that's going to take back the industrial revolution, it's individuals," he declared.

Rogers is on a mission to reduce domestic oil use by speeding the pace of automotive development, bringing to market lightweight, fuel-efficient cars — such as the VLC, which stands for Very Light Car — more quickly and cheaply. A former Marine, Rogers believes that more efficient vehicle innovation is also needed for military applications, where it will save taxpayer dollars and benefit U.S. troops, who currently depend on outdated designs.

According to Rogers, Local Motors was able to develop the Rally Fighter one-third faster than the Chevy Volt, Tesla Roadster, and Fisker Karma — and for one one-hundredth the cost. Such an accomplishment requires an eager, engaged, organized community of designers equipped with the appropriate software. To ensure that all its collaborators would have access to professional tools, Local Motors sought "real CAD software that cost less than a pizza," said Rogers. Siemens PLM Software answered with Solid Edge Design1, which costs $19.95 per month.

In addition to crowdsourcing, Rogers also advocates open-source design as "a really important step to being able to design faster." After the Rally Fighter was designed, for example, "we turned around and gave all the data back [to the public]," said Rogers. Now, anyone can use the open-source design information to build their own Rally Fighter, should they have the desire (and the financial means) to do so; they don't have to go through Local Motors to attain a finished product. This philosophy is diametrically opposed to traditional automotive industry thinking, Rogers said, where intellectual property is fiercely guarded. "Your speed to market is a more important weapon than closing off development," he explained.

The drive for "more" doesn't end with users, collaborators, or dollars; it also applies to features in Solid Edge ST5, which incorporates more than 1,300 customer-requested enhancements. Dan Staples, director of Solid Edge product development, introduced the audience to ST5, which will ship in July, according to the company's now-standard annual release schedule.

According to Staples, Solid Edge ST5 builds on the software's core strengths — large assembly handling, sheet metal design, and drawing production — and bolsters its synchronous design technology core. This sets the stage for future versions of the software (ST6 and beyond) that will handle all types of parts, of all complexity levels, in synchronous mode. Staples noted that mixed-mode and ordered (traditional) modeling will still be available.

In ST5, the software's history-free, feature-based synchronous technology is now available in "bite-size pieces," said Staples; users can apply it to only a portion of a design, if desired. Support for multibody modeling means that users can import parts and assemblies from other CAD platforms, then combine the resulting imported geometry into a single part file or multiple parts. 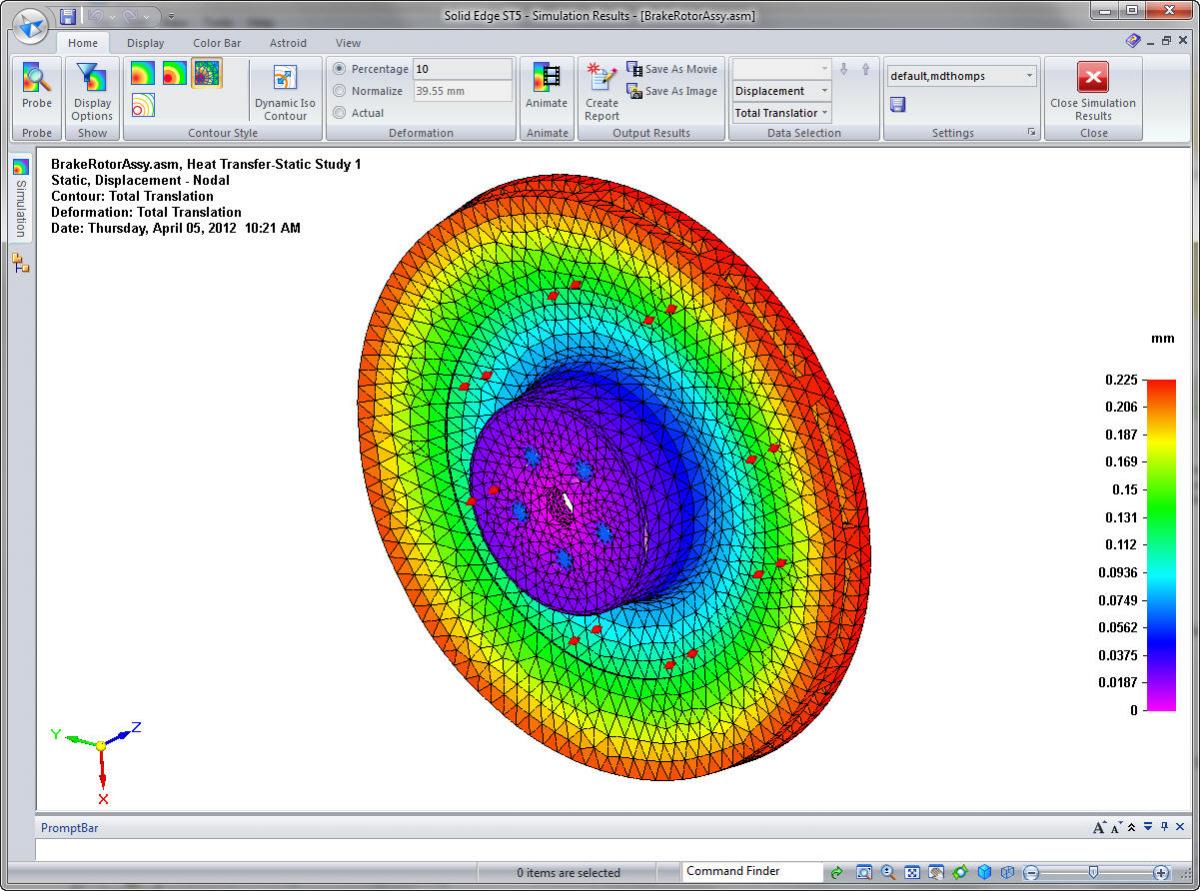 
Drafting enhancements include improved parts lists, which can be placed across sheets automatically; more control over dimension display; text boxes with bullets and numbering; and creation of production-ready nailboard drawings from 3D wire harness designs.

Judging by applause, the audience was especially intrigued by the new Clean Sketch command, which eliminates duplicate elements, points, and tiny elements from imported sketches, and a new Slot command, which helps users design sliding parts and animates motion along their paths. 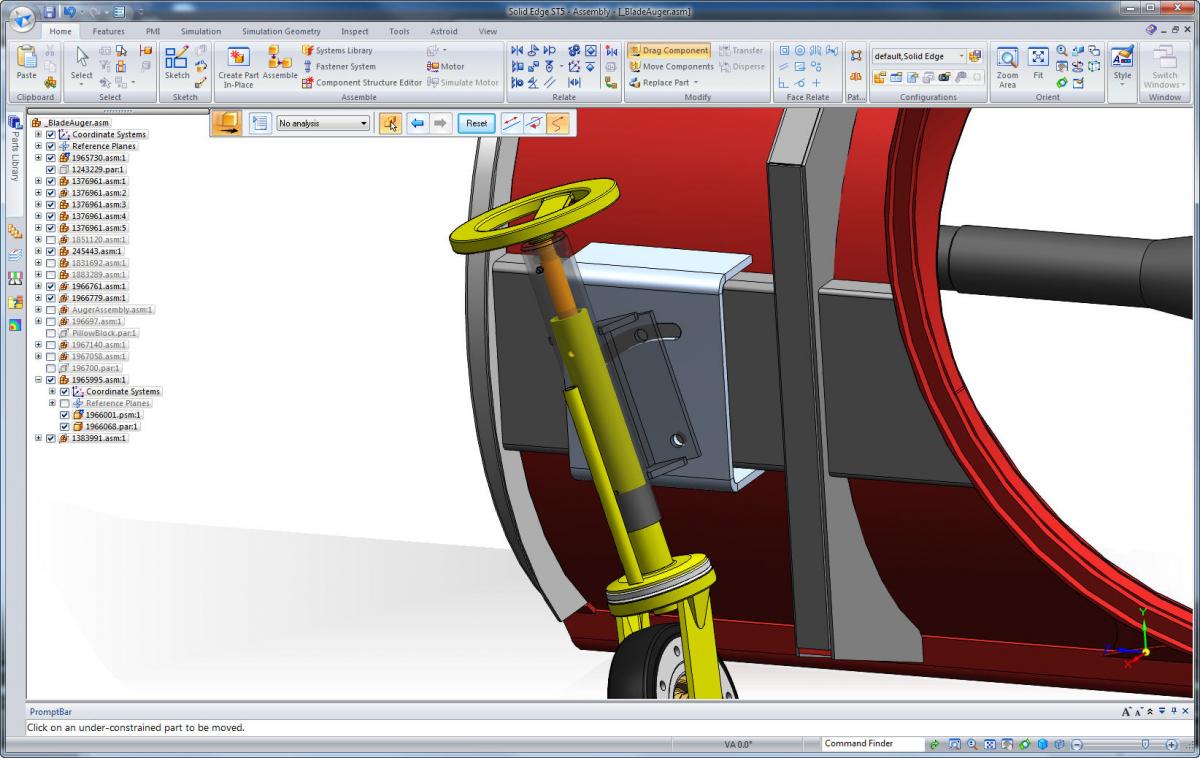 Users can simulate the motion of a part sliding along a slot path.Image courtesy of Siemens PLM Software.


The Solution Manager, which remembers dimension decisions, was also well received; users can click on a face to isolate it from the solve, or click on a dimension to temporarily relax it. 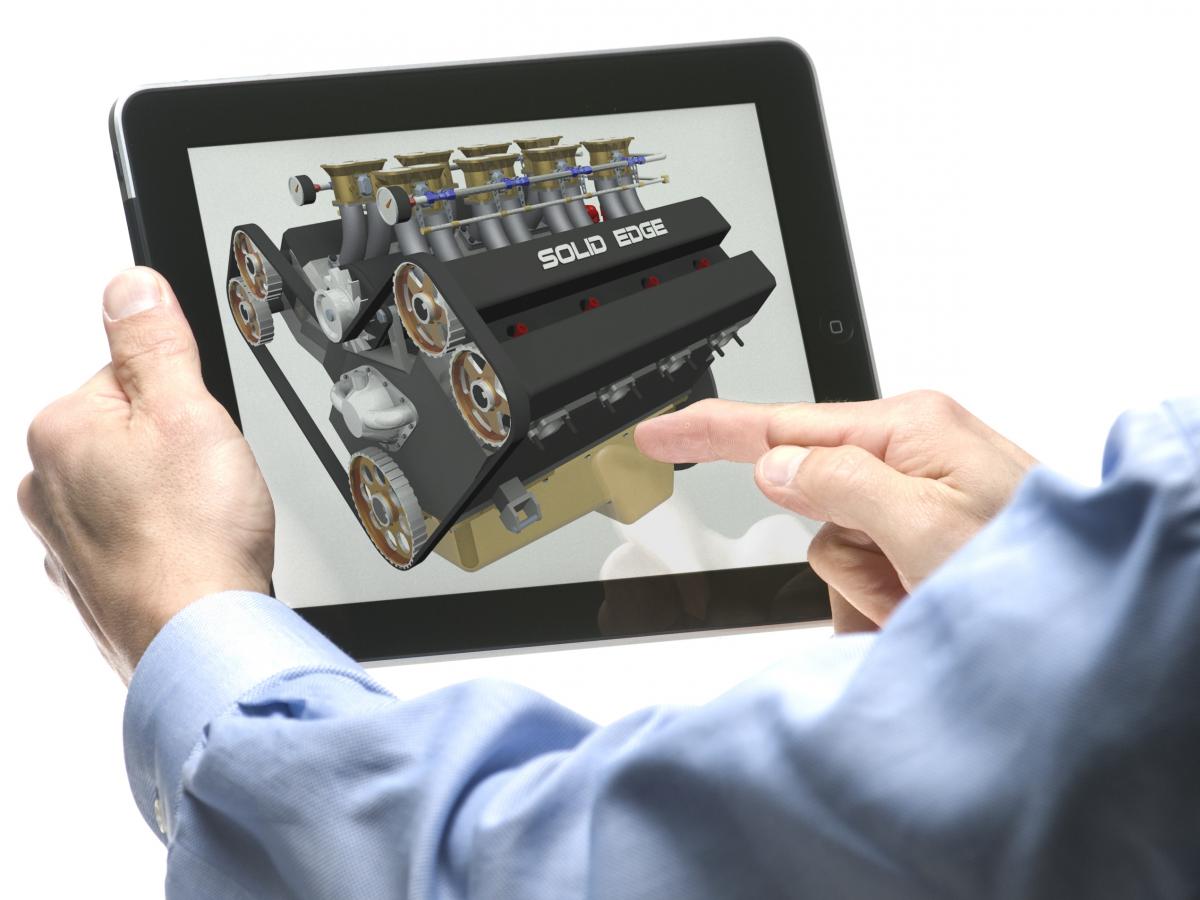 Staples likened product lifecycle management (PLM) to an onion: vaulting files lies at the core, and layered on top of that capability is design process management. Lifecycle management makes up the outermost layer. The larger the company, the more of these three layers it will need. Whereas Insight focused on the first level of capabilities — vaulting and search — Insight XT addresses the second as well. "XT broadens Insight technology to be able to deal with the design process," said Staples. "Insight XT lets you manage the files, and more importantly, the relationships between the files."

"SolidEdge Insight XT represents a whole new class of PDM [product data management] system," Simon Floyd, director of innovation and PLM strategy for Microsoft, told Cadalyst. "It provides exceptional visualization of information and relationships, is easy to use, and because it's built on SharePoint 2010, it has collaboration at its heart. It has a modern interface that presents information, tasks, and documents [clearly] and makes PDM very approachable."

Insight XT is intended for companies that work with SharePoint and need help managing Solid Edge files and related documents. It does not replace Siemens PLM Software's Teamcenter platform, which provides PLM capabilities including multi-CAD and engineering process data management.

To better define the design data-management landscape, Siemens PLM Software recently partnered with research firm Tech-Clarity to survey some 2,300 representatives of manufacturing organizations. More than half of the respondents said they are still using Windows application folders and network drives to manage their design data, rather than data-management software; 40% indicated that searching for data is a problem. About a quarter of the companies spend more than 20% of their time on data-management tasks that don’t add value.

Tech-Clarity President Jim Brown explained that dedicated data-management solutions enable users to control, access, and share information in a structured, collaborative way — a capability that grows in importance as engineers struggle with an increasingly complex design world, bedeviled by more competition, more regulations, and more demands on their time. "Getting data management in place sets the foundation for doing more for your business," Brown said. Once established, that foundation can expand to incorporate more people in the product-development process and downstream. The ability to search and reuse design data is not only important to save time and effort, but to prevent replicating problems, said Brown.

According to Bill McClure, vice-president of Velocity Series product development, it's much easier to generate data today — but as a result, you have to manage more data. "The instant you go to dispersed locations with your workforce, you need some kind of data management," he said.

Although machinery design is still the primary application of Solid Edge, Newbury expects that consumer goods design will be a "good growth area" for the company. Newbury also noted the strong growth potential in the BRIC countries (Brazil, Russia, India, and China), where conversion from 2D to 3D platforms is common. McClure confirmed that the company will focus on growing its channel — crucial because of its primary role in sales.

"Solid Edge is back, stronger than ever, and we're growing. We want to conquer the world and change it," said McClure. "At end of the day, we need to help people design better. That's the only thing that matters."