Solid Edge provides many tools for building and managing your assemblies, as you know. Designing new parts in the context of your assembly ensures parts are designed correctly, but here are a few tips to save you some time and a few mouse clicks when adding existing models.

Let's start by adding some blade screens to this electric shaver. I have one already, and need two more. To place another instance of a part already in use, you don't have to rely on the parts library; instead, simply drag the part directly from the Pathfinder, then use assembly constraints to position it accurately. 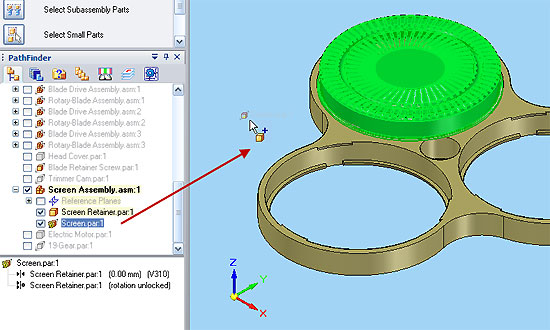 Dragging parts already placed in Solid Edge from the Pathfinder copies them into the assembly.


Another way to achieve this is to use common Windows shortcut keys. With the required part selected, type Ctrl+C to copy it to the clipboard, and Ctrl+V to paste it into your design. Notice that the part appears at your cursor, ready for final positioning.

Now let's look at how you can place parts in arbitrary positions. This is great for dragging many components together into an assembly file, then using the Assemble command to position them accurately. Using a blank assembly document, drag the required parts from the parts library into it, holding down the Shift key (Step 1 in the image below) to place them in the assembly with no constraints at the current cursor location. This is also good way of adding non-graphic parts, such as glue and paint. 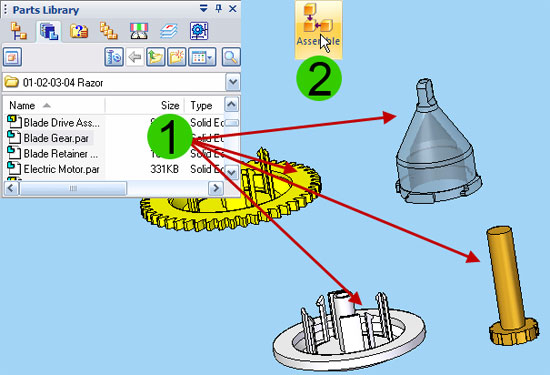 Placing parts in arbitrary using the Shift key allows you to gather all the parts together before assembly.


Now, use the Assemble command to reposition parts with no need to keep dragging parts from the parts library key.

Last but not least, here's a great technique for rebuilding divided parts. Hold down Ctrl while dragging the part into the assembly; this instructs Solid Edge to place it grounded and aligned to the assembly origin. 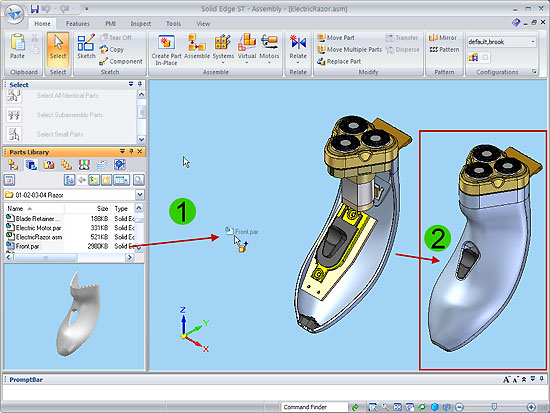 About the Author: Russell Brook