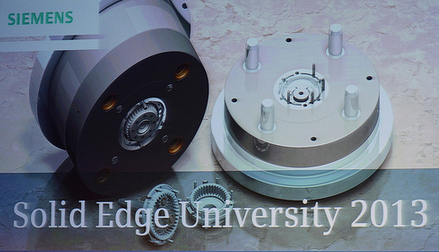 The team behind Solid Edge software is committed to giving users options, and Solid Edge ST6, announced this week, comes with lots of them — including options for how to use the software, how to learn it, and soon, how to pay for it.

Solid Edge is the midrange 3D mechanical design solution from Siemens PLM Software, the company that also develops products including the high-end NX mechanical design software and Teamcenter for product lifecycle management (PLM). The software is notable for its synchronous technology, which offers fully integrated constraint-driven modeling and history-free (or “direct”) modeling within the same interface.

Solid Edge ST6 was introduced to the 500 attendees at Solid Edge University 2013, the user conference that runs through today at the Northern Kentucky Convention Center in Covington. It incorporates 1,300 user requests, the company stated, enhancing design, simulation, learning, and collaboration.

Also announced this week were Android and iPad mini support for the free Solid Edge Mobile Viewer app; a rental program for those who wish to use a cloud-based version of Solid Edge for a monthly fee (coming in August); and Solid Edge SP for design management and collaboration in Microsoft SharePoint environments. 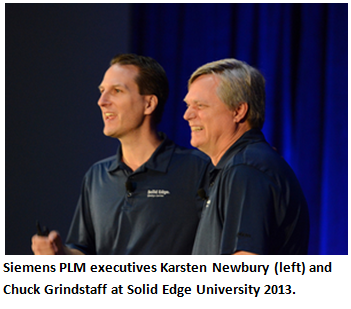 Chuck Grindstaff, CEO and president of Siemens PLM Software, kicked off his keynote presentation at SEU 2013 by assuring users of the company’s commitment to the Solid Edge product. “Solid Edge continues to be a strong member of the Siemens community,” he said. “We are firmly invested in this product.” Most likely alluding to changes afoot for Dassault Systemes’ SolidWorks software, a direct competitor of Solid Edge, Grindstaff said, “We will stay committed to our modeling kernel; you won’t have technology disruptions or data issues related to kernel changes.”

Later in the day, Dan Staples, Solid Edge director, described for attendees the values that drive Solid Edge development: accelerated design for faster time to market, faster revisions for higher repeat business, and better reuse for lower development costs. “We want Solid Edge to be, hands-down, the best mechanical assembly design system, period. With ST6, we are continuing to pursue this vision.”

Senior Vice-President Karsten Newbury, who leads the Solid Edge team, has an infectious enthusiasm for his flagship product. He spoke of growing efforts to build community around Solid Edge and how his team has increased the software’s ease of use to the point that his nine-year-old son can use it. As he turned over the stage to Staples to present the latest updates, he announced “the greatest version of Solid Edge ever: ST6!”

Later, I asked Newbury if he described every new release this way. “Well, of course, if the next release wasn’t better [than the last], why would we have done it?” he responded with a laugh. “But, actually, this is the first release I’ve said this about, and I’ve been with the business through a few releases. Although we keep improving, in this release we’ve brought a lot of things together.” In addition to all the technical improvements and connecting the Solid Edge with other tools to improve collaboration and mobile use, he explained, “We’ve done a lot of work with ST6 listening to users and connecting the product with the [user] community. That’s why I honestly say it is the best version.”

Staples led SEU 2013 attendees through the major updates in Solid Edge ST6. Scheduled to ship in July, it offers the following features and benefits, according to the company’s internal testing: