“The fastest way to create something is to not create something,” said Dan Staples, vice-president of Solid Edge Product Development at Siemens PLM Software. Staples was describing a pattern recognition feature in Solid Edge ST7 that helps users adapt imported parts to meet their needs, rather than create new ones from scratch.

This feature, which recognizes patterns in imported parts and enables users to quickly modify them, is one of many new additions to the 3D mechanical design solution that aim to trim design time by increasing efficiency in common tasks.

Karsten Newbury, senior vice-president and general manager for Mainstream Engineering Software at Siemens PLM, opened SEU by discussing the “three pillars” of the company’s Solid Edge offerings: product, access, and community. For the first, he told the audience that synchronous technology — which combines aspects of history-free and parametric modeling — can “help you improve your time to market” and resolve the problem of “people worrying about how to design the product, rather than what kind of product to design.”

In the realm of access, Newbury touted Solid Edge’s 45-day free trial and the monthly subscription option, which targets startups, small companies, and project-based businesses. The greater flexibility of the monthly payment plan “allows you to manage your cash while you’re using professional design,” he told the audience. The monthly subscription program was launched last August in the United States, the United Kingdom, and Japan; Newbury announced that the English-language version will now be extended to 13 more countries (all located in Europe). In addition, four new subscription versions — French, Italian, German, and Spanish — will become available in June.

The third pillar is a twofold challenge for Solid Edge management, which seeks to both serve the existing user community and to expand it. Newbury noted that more than 500,000 seats of Solid Edge have been sold; there are also more than 600,000 users of the free Solid Edge 2D Drafting product and more than 300,000 free student registrations.

Despite the maturity of the product, Solid Edge lags behind better-known competitors in terms of brand awareness and adoption; SEU is a gathering of hundreds of users, not thousands. According to Newbury, that’s a result of having been “tucked away inside a big corporation” (namely product lifecycle management [PLM] software developer UGS, which was purchased by Siemens in 2007) and cut off from sales and marketing resources for years. “We have a ton of improvement potential … it’s an area we need to work on,” he told media representatives in attendance.

Efforts to support and enlarge the user community include the Solid Edge Community portal, where users can ask questions, read blog posts and announcements, and help their peers; a growing roster of user meetings and training events; and new curricula and project materials for the Solid Edge academic program. “The whole educational area is very important to us,” Newbury noted.

That emphasis on fostering the next generation of Solid Edge users was evident at SEU, which highlighted the Siemens-supported Greenpower project, in which students ranging from nine years old through college age design and race single-seat electric cars. In addition, presenter David Hutton — inventor of a hand-operated, inexpensive, maintenance-free irrigation pump for small farmers — explained that he was introduced to Solid Edge when he used a free educational version as a university student.

The Launch of ST7

A main focus of the conference, naturally, was the debut of Solid Edge ST7. Following in the tradition of its predecessors, the new version incorporates more than 1,300 customer requests, said Staples. Many of the new features are focused in four areas, and include the following capabilities:

Accelerated 3D design.
• 3D Sketch functionality, which is available in the part, assembly, and sheet metal environments, makes it easier to create components that bend across multiple planes or are swept along a 3D path. 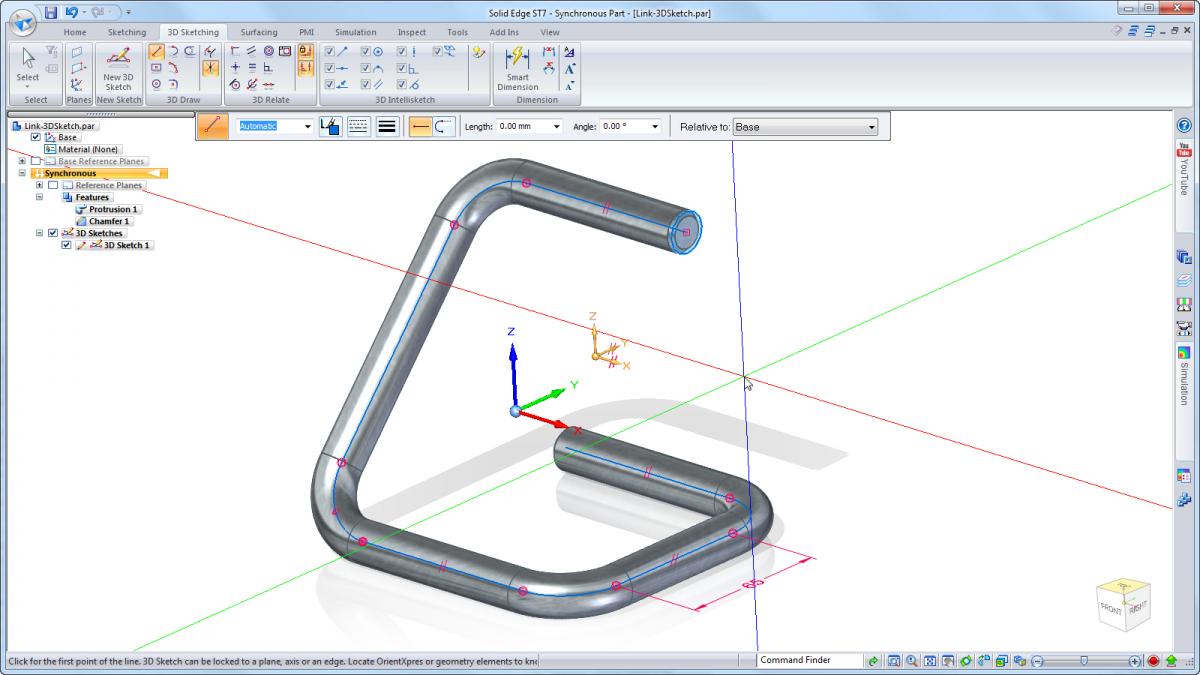 3D Sketch provides a fast creation method for components bent in more than one plane, such as tubes and lengths of wire. Image courtesy of Siemens PLM Software.


• Quick Shapes, which allows quick edits to simple shapes to create more complex shapes, was described as a “sleeper feature”: “They’re simple things, but they just improve your productivity so much,” said Staples.
• Bend up a sheet metal part around a solid model; this process is five times faster than it was in ST6, according to testing by the Solid Edge team.
• For designing hoses, cables, and similar components, fixed-length curves automatically adjust to maintain a specific length.
• Take multiple 3D measurements at once, and view the results graphically with color-coding. A built-in, automatic notepad keeps track of the measurements.
• International standards–based hole definition was a popular element of the demonstration. “A hole is a hole, right?” asked Staples. “No … a hole is a very important design element.” 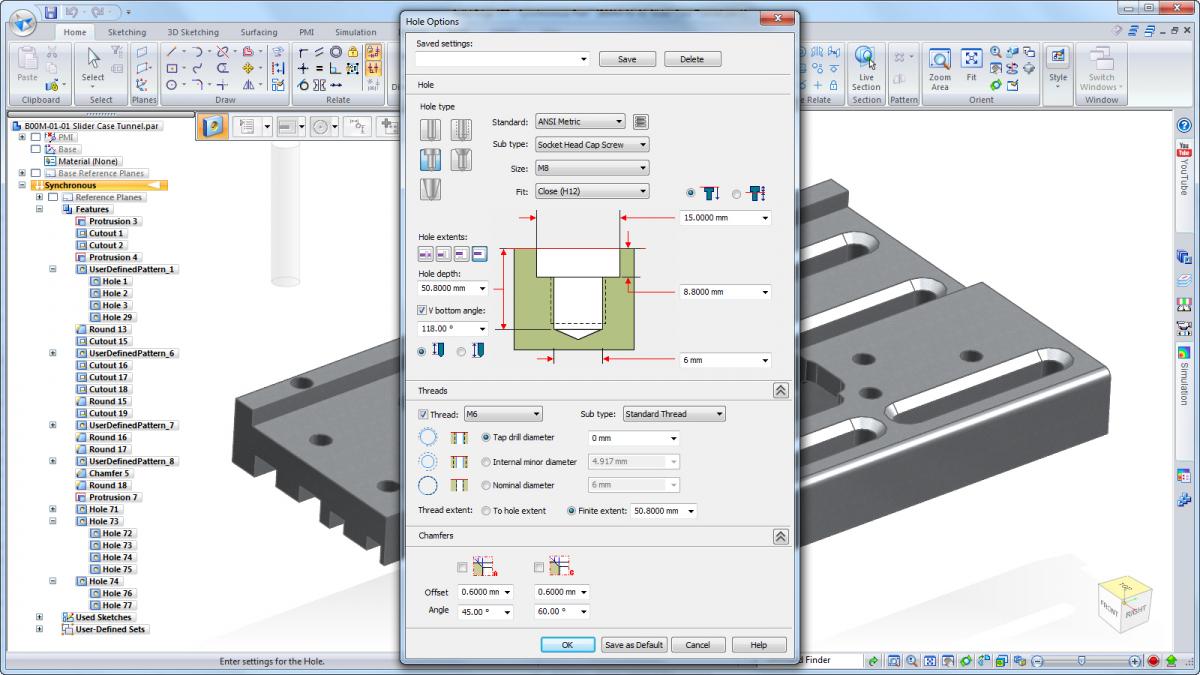 • Create a flattened blank from any 3D model to create manufacturing data for formed and stamped parts.

The Blank Body feature can be applied to fabric as well, as with this upholstered seat.


• Duplicate components in multiple positions and orientations in assemblies, based on the locations of existing components. “This is a brand-new technology that is unique to Solid Edge” and is ten times faster than in ST6, said Staples. 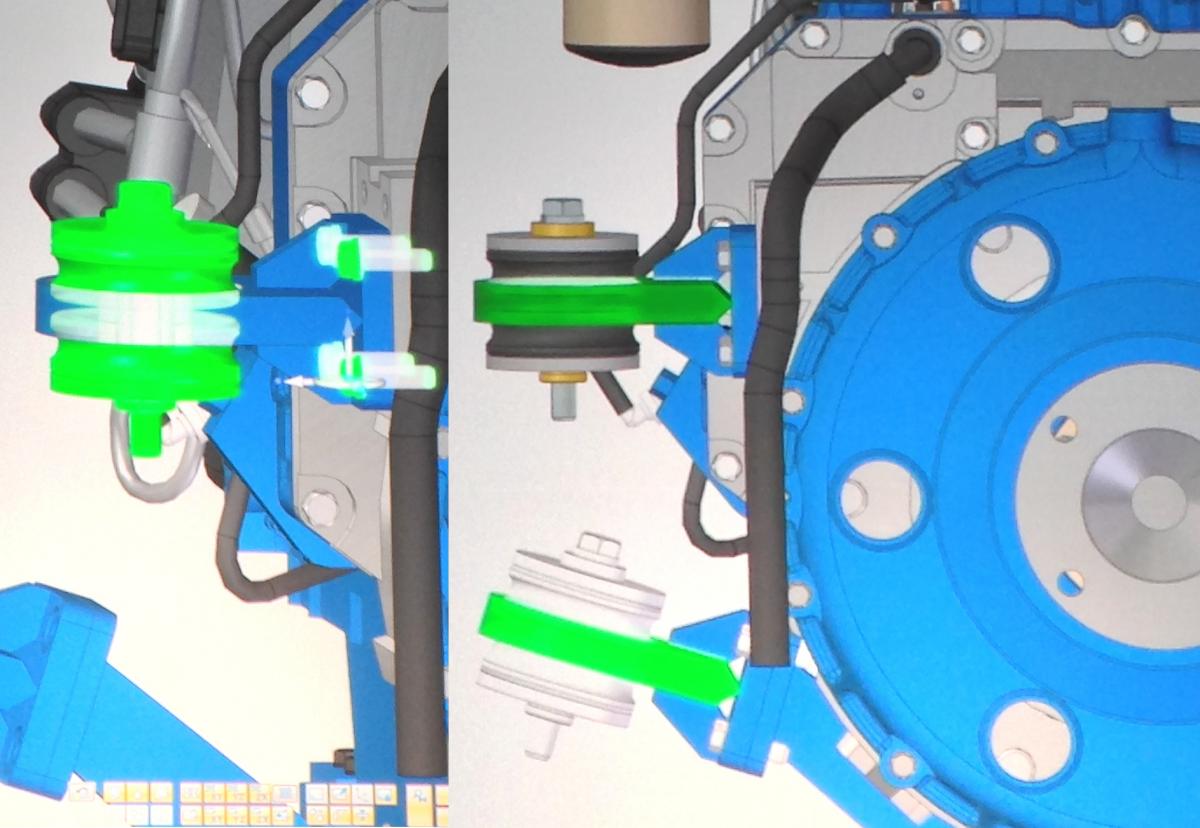 Solid Edge ST7 users can quickly duplicate components such as this engine mount (upper left), and place the copies in all required locations around the engine model.


• Create a pattern of components along a 3D curve (such as steps in a spiral staircase).
• Create photorealistic renderings with integrated KeyShot technology. According to internal testing, the new capabilities enable users to create photorealistic renderings of native 3D models up to five times more quickly. With LiveLink, changes made to the model are updated in KeyShot. Although KeyShot and Solid Edge are bundled, the two applications remain separate, so users can continue their design work while images and animations are being rendered. Thomas Teger, vice-president of Products and Strategy at Luxion, shared the example of golf club manufacturer Wilson, which saves time by going directly from the 3D models of its products to renderings for advertisements, bypassing the traditional photo shoot altogether. 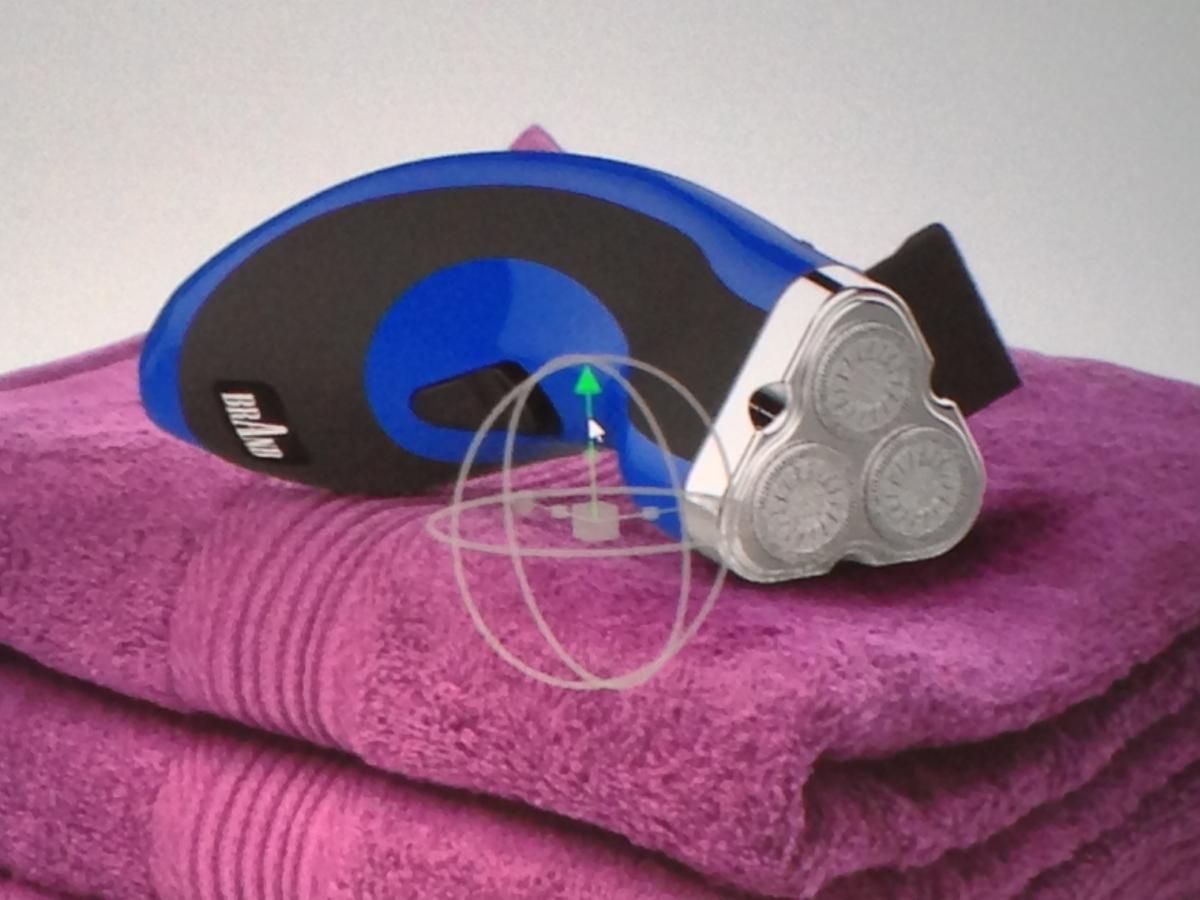 Luxion’s KeyShot technology is now included with Solid Edge Classic and Premium editions, enabling users to create renderings of their models and position them in realistic environments. Image courtesy of Siemens PLM Software.


• And it’s not a 3D feature, but Automatic Coordinate Dimension — which automatically spaces out, jogs, and places dimensions in 2D drawings — garnered an enthusiastic response from the audience, and was described as ten times faster than in the previous version of Solid Edge. 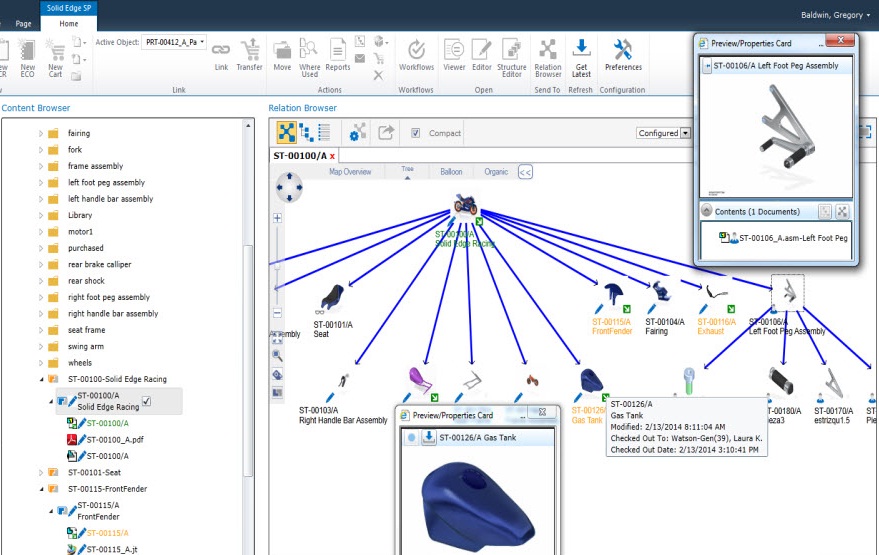 Solid Edge SP supports automatic links to assemblies and components that are being created and revised. Image courtesy of Siemens PLM Software.

Expanded capabilities through apps. Siemens PLM is expanding its portfolio of in-house and third-party apps that extend Solid Edge’s design, manufacturing, and collaboration capabilities. These include integrated solutions for parts libraries, 3D printing, simulation, manufacturing, and mobile device support. For example, a new app for Android and iOS enables mobile access to structured product catalogs from hundreds of manufacturers. There are now more than 500 Solid Edge apps available, the company reports (some are described here), and an online app store will open by the end of the year. The store will help users to “find all the apps that are out there,” said Newbury, while enabling third-party developers to monetize their efforts.

A solid core. Siemens’ Parasolid software — the 3D geometric modeling kernel around which Solid Edge and NX are built, as well as products developed by independent software vendors — is further extending its reach. GrabCAD has licensed Parasolid for use within the GrabCAD Workbench application for cloud-based CAD management. The Parasolid component will enable 3D model interrogation, inspection, and visualization in Workbench. “With Parasolid in the cloud, we can make our viewer even better … taking it to the next level,” said Hardi Meybaum, GrabCAD founder and CEO. 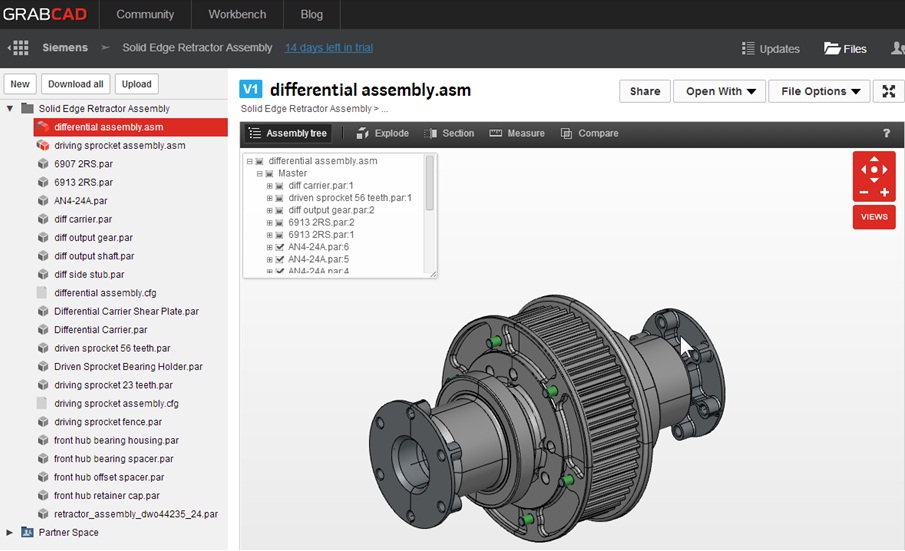 Users can publish their designs to GrabCAD Workbench, where they can track file versions, share files with collaborators, and access thousands of public Solid Edge models. Image courtesy of Siemens PLM Software.


From the screen to the shop. Geometric’s embedded CAMWorks for Solid Edge solution has been expanded with more computer-aided machining (CAM) capabilities including multiaxis milling, wire EDM, and mill-turn capabilities, and features support for Solid Edge assemblies.

Feeling touchy. The Microsoft Surface Pro tablet now offers full support for Solid Edge design tasks and expanded support for touch gestures (such as rotating 3D models with a finger drag across the screen), as well as input from a stylus or 3D mouse.