Cincinnati in late October was the setting for Solid Edge University 2015, a gathering of Solid Edge customers for technology updates and education, networking, and socializing. In addition to several hundred attendees — reportedly the highest attendance to date — organizer Siemens PLM Software hosted a few dozen industry writers, editors, and analysts from around the world, including myself, and we soaked up presentations and workshops alongside regular attendees.

John Miller, senior vice-president and general manager, mainstream engineering at Siemens PLM, kicked off Day 1 by welcoming attendees, touting the company-supported Greenpower Education Trust, an academic program that promotes sustainable design and engineering to young students, and introducing the next speaker, who left most of us speechless.

Philip Norman from Ross Robotics described himself as "not a formal engineer. ... I'm basically an artist — a writer and a painter, things like that." But with astonishing intelligence, creativity, and persistence, he came to invent, develop, and commercialize a modular robotics system that was conceived as a toy but eventually redeveloped and adopted "by about the toughest customer you can think of on the planet for a robot company," he said: the National Institute for Subatomic Physics at the CERN nuclear research laboratory in Geneva.

Norman traced his journey from artist to engineer, as he called on art, nature, science, and math for inspiration and input to overcome roadblocks on the path to creating his groundbreaking design, which now is doing groundbreaking work. 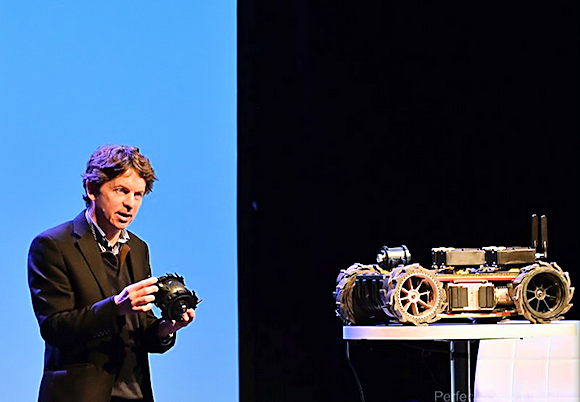 
"I can't brag millions in sales at this stage," Norman explained, "but what I can say is that we're innovative, we are up against the big guys in the market, but what we've got is a completely different way of doing engineering to make a robot for a customer. Instead of starting with a blank sheet, designing the thing, delivering it for a task, we've developed a modular engineering system that integrates generic parts and can be customized, working with the customer, to do exactly what they want. So it kind of turns the whole formula of product design, development, and delivery on its head."

Finally calling on Solid Edge (version 12 at the time) to bring his design to fruition, he said, "was so transformative in my life." Norman's story is one-of-a-kind — inspiring, entertaining, and challenging as your mind tries to keep pace with his. I highly recommend watching the full recorded presentation.

Next up, Ken Hosch, director, innovation, research, and strategy at Siemens PLM, introduced the soon-to-be-released Catchbook, a sketching and tracing app for Android, iOS, and Windows mobile devices that's designed for easy content creation and sharing. A "departure from what we traditionally do at Siemens PLM," Hosch said, the app targets do-it-yourselfers, architects, and interior designers. "As much as possible, we've tried to [provide] a pen-and-paper experience" with the app, he said. Catchbook is currently in the beta-testing stage.

Attendees got a tour of Solid Edge ST8, which was released in May, including new and improved features such as pattern recognition for adding intelligence to "dumb" solids; spreadsheet-driven pattern design; enhanced welding, digital markup, and 2D drawing; drawing comparison; and Dynamic Designer, a fully embedded motion-simulation app. The company reminded attendees that a cloud-based version of Solid Edge is available as a 45-day trial in the United States and United Kingdom. You can view recordings of main stage presentations, instructional sessions, and other videos from SEU 2015, including the Solid Edge ST8 presentation on YouTube.

A Tablet That Runs Full CAD

Microsoft Surface had a major presence at SEU as the event's platinum sponsor. During the main stage presentation on the morning of Day 1, the company introduced the Surface Pro 4 tablet, which had just debuted for sale. Why was Microsoft making a splash about a tablet at a CAD users' event? This tablet happens to run Solid Edge and other full-fledged, Windows-based CAD modeling software.

Matt Chapman, global Surface industry marketing lead at Microsoft, and Simon Floyd, director, business strategy and development, presented the new features of the CAD-ready device (and in the end, gave away half a dozen units to deserving attendees). 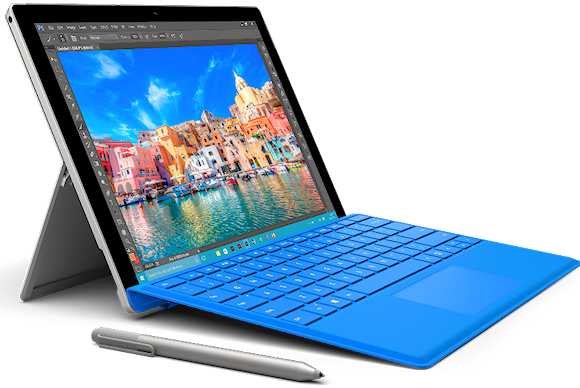