Most development for latest version was under the hood, but we found some fantastic new features on the surface as well.


In many ways, SolidWorks 2010 reminds me of the "duck-pond syndrome." Everything seems calm and quiet on the surface, but there's a lot of powerful paddling going on below the waterline.

IIn a meeting earlier this year, Jeremy Regnerus, product marketing manager for Dassault Systemes SolidWorks, emphasized that SolidWorks 2010 has very few Wow features. Most development work for this version, he explained, has gone into making the product faster, more stable, and more reliable. The truth is, the newest version still has more than 200 detail improvements, most of them originating from customer requests.

Let's look at the speed issue first. Regnerus demonstrated a part rebuild that performed 95% faster in SolidWorks 2010 than in SolidWorks 2009. As the saying goes, "Your results may vary," so you probably won't get this sort of improvement all the time in every part, but it does indicate the direction of the company’s efforts. I would have liked to see the time savings achieved for a more complex model — after all, a 95% improvement in rebuilding a 3-minute part really would be something.

SolidWorks also has worked on the user interface. The big news here is the new mouse-gesturing feature. Simply right-click and drag in one of eight directions. A halo of commands appears around the cursor, with highlighting to show the one you are about to select. This feature can be customized to your command preferences.

When Regnerus said that there were very few Wow features, he may have fibbed a little bit.

For example, SolidWorks 2010 adds something called SolidWorks SustainabilityXpress. With it, you can design a part using normal procedures, including specifying the material. You then can select the regions of the world where the part is to be manufactured and where it is to be sold. SustainabilityXpress then produces a series of environmental-impact evaluations. These evaluations include detailed factors such as the production, use, and disposal of the part and the engine emissions from the ship used to bring the part from Asia to North America.

SustainabilityXpress also includes a Find Similar Material functionality. If you specify a particular plastic material, for example, it will try to find other plastics that have the same or better physical properties, but with less environmental impact. 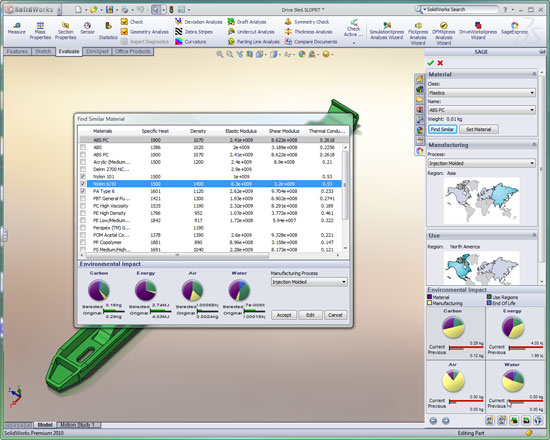 SustainabilityXpress initially is offered for single parts only, but the full version of the product, SolidWorks Sustainability, evaluates entire assemblies and allows more specific input of data, such as the amount and type of energy consumed during use and the specific methods of transportation.

Among the changes to SolidWorks 2010 are some interesting part-modeling capabilities. One is the ability to convert a machined solid part to a multiple-piece sheet-metal weldment without switching to a different modeling environment.

SolidWorks 2010 includes enhanced support for direct editing of dumb 3D solids exported from other 3D CAD applications. Unfortunately, it still doesn't offer support for native CATIA files, even though both programs are owned by the same parent company. The good news is that several third-party applications are available to handle these conversions.

SolidWorks Simulation adds an interesting new functionality. Actions in a motion simulation can be triggered by specific events rather than being purely time-driven. For example, a hydraulic ram will extend until it hits a limit switch, which will actuate a gripper mechanism, which in turn will activate a rotator, which operates until it triggers a photoswitch. The really good news here is that the sequence data can be exported easily for use in setting programmable logic controller (PLC) units. 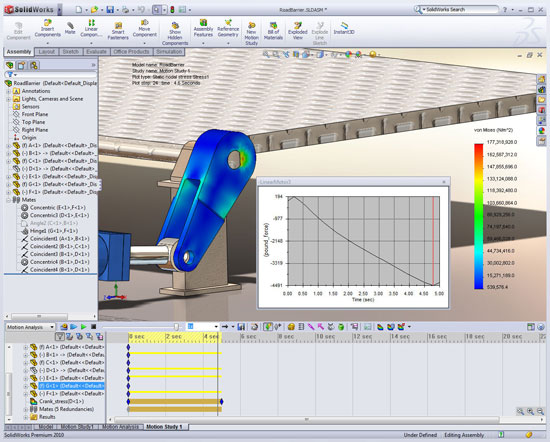 Managing enterprise product data management (PDM) also has been improved. For example, users now can set up master configurations and push them directly down onto client machines.

3DVIA Composer, the tool that helps publish SolidWorks models in downstream applications such as product manuals and animations, comes in for its share of improvements too. Specifically, it now can access more of the SolidWorks model data, and supports SolidWorks configurations and exploded views, high-quality raster graphics, and vector illustrations. Some notable features are not new to this release: 3DVIA Composer remains associative to the SolidWorks files, and as in the past, any changes made in SolidWorks 2010 will reflect in the renderings used downstream.

A Bit of Wow

All in all, the SolidWorks 2010 family of products has quite a few exciting new features. Add to this the upgrades to performance and you have a release worthy of attention.