The product development software portfolio from Dassault Systèmes is designed for mechanical engineers — and their diverse collaborators.

During a media preview event held at the North American headquarters outside Boston, Dassault Systèmes executives stressed that the 2015 portfolio supports the broader network of professionals involved in product development. Aaron Kelly, vice-president of user experience and product portfolio management, explained that the goal is to "expand and leverage 3D for more people," including those in technical publications, marketing, quality assurance, electrical engineering, and manufacturing. "SolidWorks is 3D for professionals — not only for mechanical engineering professionals," said Chief Executive Officer Bertrand Sicot.

MCAD use has evolved, Kelly noted, from what were typically single-user workflows to an environment of team-based and inter-company collaboration. Our collaboration tools, however — e-mail, telephone, chat apps, and social media tools — are not sufficient to support 3D design collaboration, he explained. To address that deficiency, the company has introduced Collaborative Sharing for SolidWorks, a cloud-based collaborative development environment that's already part of SolidWorks Mechanical Conceptual, the conceptual mechanical design application launched earlier this year. Collaborative Sharing now enables SolidWorks CAD, eDrawings, and DraftSight users to save, manage, and share files with coworkers and third-party collaborators (provided they also have licenses); capture project data; and create design communities.

Users can save their files from SolidWorks directly to Collaborative Sharing, then open them from there to "collaborate with anyone," said Kelly. "This is going to change the way people design," he continued.

Industrial Conceptual, a complement to SolidWorks CAD, was launched in the second quarter of the year to select customers, and will become generally available in the first quarter of 2015, said Sicot.

The 2015 release also brings entirely new developments, such as MBD, a "drawingless" manufacturing solution that's separate from, but integrated into, SolidWorks. MBD is named for its function: model-based definition. Rather than craft a 3D model, then create 2D drawings, MBD users can define, organize, and publish 3D product manufacturing information in file formats including 3D PDF and eDrawings — eliminating the 2D drawings altogether. "[They may not be] going away," Kelly commented, "but we are embracing workflows where people see 2D drawings as not as important as they once were." 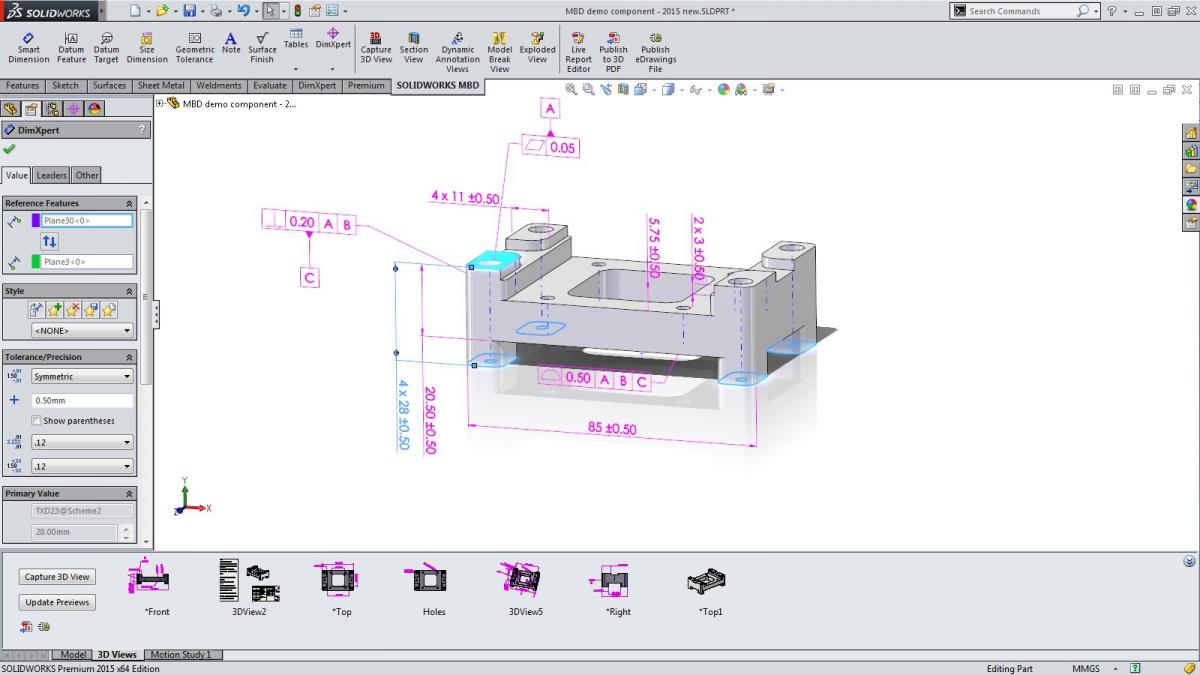 
"2D will go on and on … probably for 50 years," said SolidWorks product manager Craig Therrien. "We're not abandoning 2D, by any stretch of the imagination." However, the company's customers are moving toward workflows using model-based definition, he observed, especially those in aerospace, automotive, and consumer goods. "It's a much cleaner way of delivering the information," said Therrien. "Nothing is left to interpretation." Already, 8% send just the 3D model with dimensions and tolerances on to manufacturing, he said.

The National Institute of Standards and Technology "is a big driver [of the trend], pushing the idea of less data, more information in the model," Therrien noted. Military standards are also driving adoption of model-based definition, said SolidWorks product manager Oboe Wu. MIL-STD-31000A, for example, requires that 3D models, not 2D drawings, be used to specify parts created for military use.

Wu went on to explain that companies spend one-third of their total engineering dollars on producing 2D drawings — and 60% of those don't accurately replicate the 3D design. "If the 2D drawing is wrong, the [manufacturing specification] is wrong, creating massive downstream problems," he noted, including wasted materials, time, and money. MBD is priced at $1,995 in the U.S. ($495 subscription).