An updated user interface promises greater efficiency, and SolidWorks takes its first steps into the browser.


At the beginning of October, Dassault Systèmes officially released SolidWorks 2016, the latest version of its portfolio of 3D product design and engineering applications. Kishore Boyalakuntla, senior director of product management, explained at a media launch event that its users — and developers — don’t look at SolidWorks as a product, but as a multifaceted innovation platform. “It’s an ecosystem,” he said, emphasizing the company’s goal of providing a comprehensive network of software tools and resources to address every aspect of product development.

“We want to help people design full products, not just a shape,” said Suchit Jain, vice-president of strategy and community. Jain pointed out that all the components of the ecosystem “are aware of each other; they work in a very integrated fashion. It’s not a portfolio of disparate products.”

The Promise of Anytime, Anywhere, Any Device

That “ecosystem” will soon extend beyond the desktop, thanks to a browser-based version of SolidWorks for users working in the field, in a client’s office, at home, or anywhere else where they have Internet access. CEO Gian Paolo Bassi demonstrated the new SolidWorks Online Edition on Chromebook and MacBook laptops, connecting to a server more than 1,000 miles away, and mentioned that it would be available “very soon” on tablets as well. The Online Edition requires no installation of any kind, and promises the full functionality of SolidWorks; “This is the SolidWorks that you all know and like,” said Bassi. (A video of the demonstration is available here.)

During discussions of the Online Edition, SolidWorks executives were careful to avoid the term cloud. “A lot of people flap their mouths with ‘cloud, cloud, cloud,’” scoffed Bassi. “We don’t need to fill up our mouth with big words.” “Cloud” starts whenever you have some part of your workflow, your data creation, outside your desktop, he clarified. “We don’t believe that cloud means you run everything in the browser.”

For the time being, however, those requests are coming from a limited group of customers, Rucinski reported. “It’s a very small percentage of our install base that wants to ever run in a browser, or take their license somewhere else,” he said. “Most users are happy installing software and running locally.” The need for flexible access is directly related to the frequency of travel in various job roles, he noted: Users who frequently visit suppliers, job sites, and remote offices top the list.

Although the company isn’t ready to announce a pricing structure yet, it is evaluating term license, subscription, and hourly rental options for SolidWorks Online Edition, which is currently only available for software trials (through My.SolidWorks.com). The Online Edition is only available in North America at this time.

The SolidWorks 2016 release includes hundreds of improvements and new capabilities, more than 90% of which were instituted in response to requests and feedback from the user community, the company reports.

Easier on the eyes — and hands. One of the most noticeable changes is the user interface (UI), which has been reworked both aesthetically and functionally. “The UI has a much more updated feel,” commented Mark Schneider, product marketing manager. To maximize visibility at various screen resolutions, SolidWorks text scales with the operating system text height settings; icons, buttons, and toolbars can scale as well.

The new UI was shaped by several influences, said Boyalakuntla, including the increasing prevalence of 4K monitors and customer adoption of Windows 10. Bassi noted that the new color scheme of the UI better supports users who are colorblind, as well as those who have limited vision.

The addition of breadcrumbs — contextual mini-menus that can be made to appear at the cursor — reduces the amount of mouse travel during everyday tasks; users don’t have go into the feature tree to access items in the model hierarchy. “The great thing about breadcrumbs is it allows you to maximize your screen real estate,” said Schneider. (This video includes a demonstration of the breadcrumbs.) 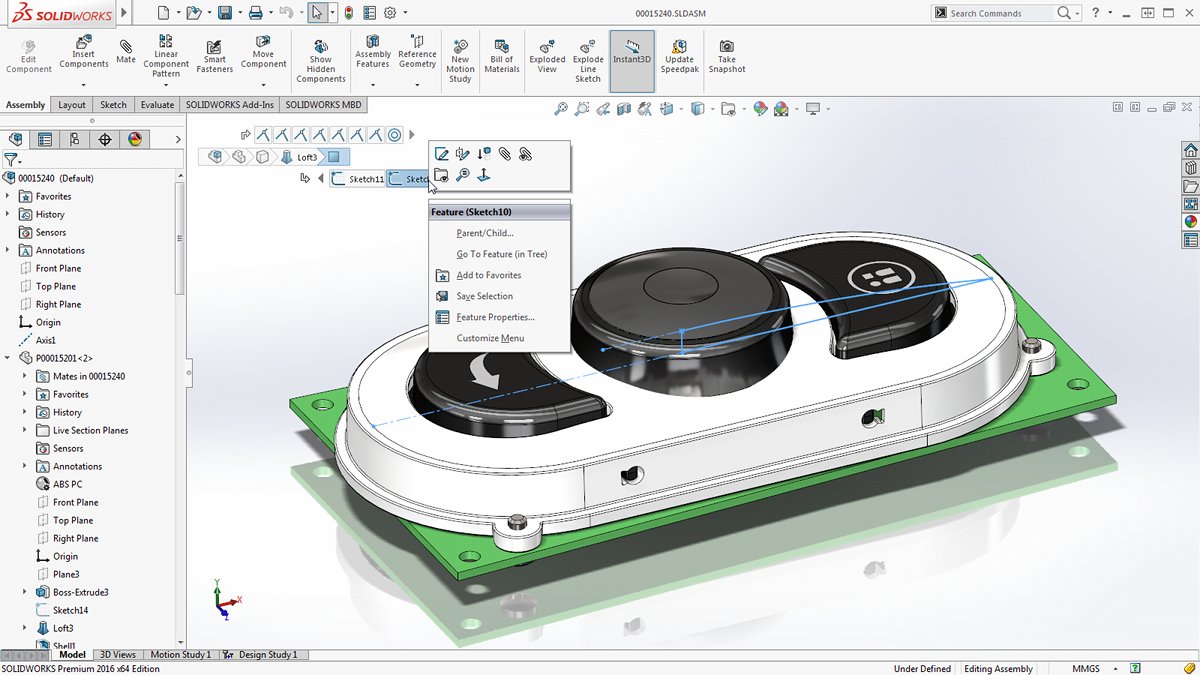 With the addition of breadcrumbs, customers are reporting an average of 20% greater productivity, said Boyalakuntla.


Although he acknowledged that some initial resistance to the new UI is to be expected, Boyalakuntla noted that the majority of customers like it so much that they won’t go back once they’ve tried it. “This UI is not an accident,” he said.