In the current economy, a picture is only worth about 200 words. If you want the full 1,000 words, you must do a lot more than just present a pretty picture.

Manufacturing companies can no longer survive if designers only produce engineering drawings of their ideas; now they also must conduct detailed analyses to ensure they are producing an optimal, manufacturable design.

SolidWorks, a 3D design solution from Dassault Systemès SolidWorks, is one such comprehensive package, and SolidWorks 2012, announced in early September, adds even more features that give manufacturing companies insight into the overall viability of a product design. For this review, I looked at the Premium edition.

One of the most important new analysis tools in SolidWorks 2012 is Costing. With it, you can analyze sheet-metal or machined parts to estimate their manufacturing cost. You can experiment with different materials, different processes (for example, water jet vs. laser cutting), and different part configurations. 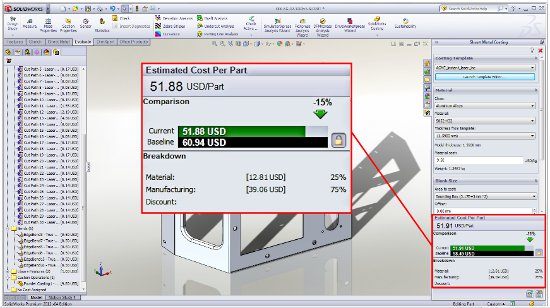 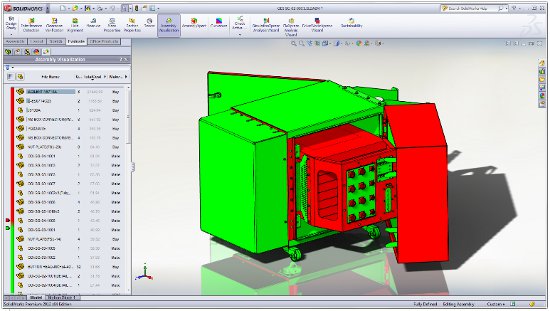 SolidWorks 2012 can help you estimate the manufacturing cost of a single sheet-metal or machined part (top, with estimated cost per part enlarged for clarity) or an assembly.


The potential problem here, as with any analysis, is the infamous GIGO (garbage in, garbage out). The results you get are no better than the raw data, specifications, and properties that you put in. SolidWorks 2012 ships with typical values for material properties and the like, but it also lets you populate templates with values that are specific to your situation.

The sample mechanism consists of a V-shaped trough containing a spring and a marble, and a tin can target. The object of the game is to compress and release the spring so the marble lands in the target can with the minimum impact force. You can use a stiffer spring with less compression or a softer spring with a longer stroke. Gravity affects the trajectory, of course.

Motion Optimization works through a range of values for each variable. Some combinations cause the marble to fall short, while others make it overshoot. More than one solution might hit the target, but with different forces. Motion Optimization helps you find the Goldilocks combination that is "just right."

You can imagine how long it would take to complete such an exercise manually. Now, consider optimizing a medical couch to get the minimum actuator force. SolidWorks 2012 quickly processed 15 iterations to arrive at the optimal values for scissor length, height, and piston offset. 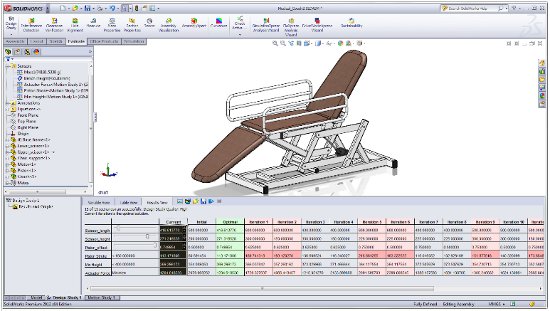 New Motion Optimization in SolidWorks 2012 can help save time and improve results by automatically analyzing multiple design iterations to determine which is best. In this example, the software modifies the features of an adjustable medical couch to attain the minimum actuator force.


Large Design Review. As computers have become faster and more powerful, users have created bigger and more complex assembly models. However, much of the speed and power of newer computers has been sucked up by ever-larger operating systems and ever-more-complex graphics. As a result, the increase in power has not yielded a corresponding increase in large-model performance.

All engineering software vendors have been working on this problem, and each has come up with its own solution. SolidWorks 2012's answer is the Large Design Review functionality.

Large Design Review very quickly opens an assembly in what is effectively a read-only mode. Among other things, you can navigate the FeatureManager design tree, measure distances, create and cap cross-sections (only on the three standard planes), plus hide and show components and create, edit, and play back walk-throughs.

It has limitations in that you cannot see or modify constraints and you cannot change the properties of components. You can open components in Large Design Review mode and edit them, but editing is not within the context of the assembly.

Feature Freeze. Very complex single parts, such as the engine block for a V12 engine, can begin to suffer from the same performance issues as a very large assembly. SolidWorks 2012 adds a new Feature Freeze capability to help overcome this. When you invoke it, a Feature Freeze bar appears in the FeatureManager design tree. You can drag this bar up and down the design tree to place it where you want. With it in place, you can't edit the features above the bar, and Rebuild only rebuilds features below the bar.

This can greatly speed up rebuilds of a complex part when you are working on a feature far down the tree, and it can also prevent unintentional changes to features above the bar.

It's the Little Things that Count

The headline-grabbing features in a new release are not always the ones that make a difference in your day-to-day work. SolidWorks is always evaluating how its software is used and listening to user comments. As a result, each new release includes hundreds of changes throughout the program.

The Pin/Unpin option in SolidWorks 2012 is a prime example. Imagine working on a project and continually jumping back and forth between the same few files. To save browsing time, you use the Recent list in the File menu. This works well until someone asks you a question that requires opening a file from a different project. As you return to the project at hand — rats! The file you want has dropped off the Recent list.

SolidWorks 2012 solves this by letting you pin a recent file so it rises to the top of the Recent list and stays there until you unpin it. You can pin several files, so you can always have quick access to your current work, even if other projects intervene.

And so it goes. Very few people use every feature in a program as big and powerful as SolidWorks Premium 2012, but no matter how you use it, I'm sure you'll find several enhancements that will help with your daily work.