SolidWorks Stays on Course as Bassi Takes the Helm

The new CEO vows to respect the company's legacy while embracing its future.


SolidWorks World 2015 drew an estimated 5,500 attendees — the folks that keynote speaker and former MakerBot CEO Bre Pettis termed "the most obsessive power users" — to Phoenix, Arizona, last week. Although "passionate" might be a more flattering term, there's no question that many in the SolidWorks community — which numbers 2.8 million worldwide, including educational users — feel strongly about the 3D MCAD software. That depth of feeling was echoed by new CEO Gian Paolo Bassi, who assured the crowd that despite his new role, "what has not changed is my passion and love for SolidWorks, my love for this community." 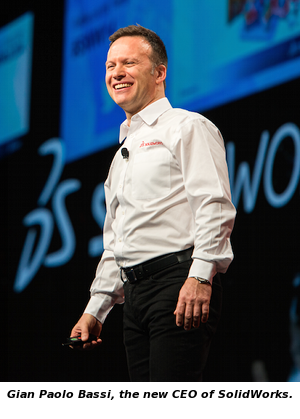 Bassi, who was previously the vice-president of research and development, is taking over the role from Bertrand Sicot, who is now vice-president of the Dassault Systèmes Value Solutions sales channel. Although such a handoff can sometimes signal a big shakeup, the message during the conference was that this change in leadership does not foretell significant changes in the company's goals or vision.

Bassi was especially careful to emphasize that SolidWorks will continue to invest in the desktop platform as long as there is customer demand for it, and not force users onto cloud-based tools before they're ready. "SolidWorks with the architecture that you know and love today will be here," said Bassi. "We are here for the long run." He compared the multi-platform development of the software to a car manufacturer's simultaneous development of gas, hybrid, and plug-in electric models, each of which meets particular customer needs.

Rich Allen, senior director of product management, seconded that stance. "We're still heavily investing in what we're now calling the SolidWorks desktop platform," he said, and confirmed that the company will continue production of desktop software for "the next 10 to 20 years."

The company is encouraging die-hard desktop devotees to explore the benefits of the cloud, however, with SolidWorks Connection, which enables users of SolidWorks, DraftSight, and eDrawings desktop products to connect to the 3DEXPERIENCE platform and its file management, business, and social innovation capabilities. SolidWorks Connection is included with Platform Contributor, which connects designers and other project stakeholders in a collaborative environment where they can monitor project progress and share data.

As far as where the company will direct its efforts in the future, Bassi observed that mechanical CAD software is a mature product — "we have done that to perfection" — and the challenges now lie at the periphery of that core: honing conceptual design tools, integrating industrial design with manufacturing, reaching out to users in a broader array of disciplines. "Today the problem is not to create the shape — that problem is pretty much solved," he explained. "The problem is to be multidisciplinary and put together all the other elements to create the business."

Perfected or not, SolidWorks continues to evolve with each release, and the direction of that evolution is shaped in part by user demands. Each year, SolidWorks invites users to share the features that they would most like to see added to the software. This is more than a venting exercise on the part of users frustrated by software limitations; many of the requests are addressed in future releases. SolidWorks 2015, for example, fulfilled requests for drawing lines from the midpoint, equal spacing options for linear patterns, and angle mates that don't flip at random, among others.

This year, the most requested enhancements are:

10. Variable pull direction draft
9. Topology optimization from the Tosca design optimization suite for all engineers
8. Both direction pattern
7. Selecting inner loops on a selected face
6. Ability to make the inferred relations permanent in sketch
5. Display the exact item causing the error
4. Selection list box too small; should be bigger, or size should be flexible
3. Export sheet metal parts of an assembly to DXF/DWG in flat state
2. Bidirectional sweep
1. Support for zero-thickness geometry

"Everything we do is geared around listening to you — you should know we'll never stop listening to you," Bruce Holway, director of product definition for SolidWorks, told the crowd.

SolidWorks. Some of the requested features above, as well as others, are in development for the 2016 release and beyond. And SolidWorks World can be counted on to provide a preview of that functionality in an unexpected format, such as an infomercial for unconventional office equipment or the action-packed adventures of CADMan and Ribbon. This year, Designers in Our Midst — a nature documentary in the style of David Attenborough — explored the natural habitat, behaviors, and tools of the titular creature. 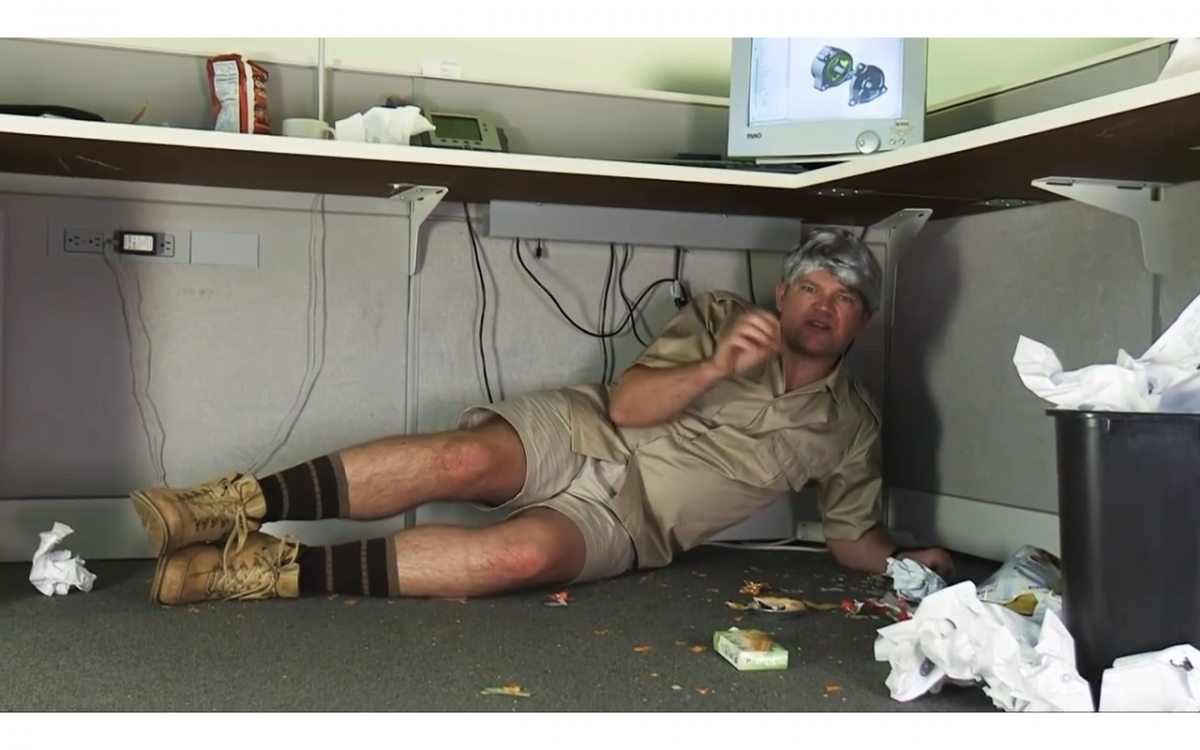 David Pattern Borer ventures into the messy nest of a wild designer in its natural habitat, the cubicle.


Although the company is careful to specify that not all these features will make it into SolidWorks 2016, intrepid host David Pattern Borer observed wild designers using the following:

"With SolidWorks, we focus on ease of use and usability, and also getting from A to B in the shortest amount of time," said Neil Cooke, director of product marketing.

Conceptual Design. Known as Mechanical Conceptual when it was launched last year, SolidWorks Conceptual Design was renamed "to support the change from a product targeted at designers to one that will support a more general concept design workflow," according to a company statement. With tools to help users capture ideas at the "napkin sketch" stage and quickly create 2D and 3D concept models, Conceptual Design is intended to be complementary to existing CAD solutions. The second release features enhancements including dynamic analysis, enhanced interoperability, and a history-based selection of mating options.

Industrial Design. The conference marked the launch of SolidWorks Industrial Design, which was called Industrial Conceptual when it was unveiled last September. The cloud-based tool is intended for designing complex, organic shapes — "products that are beautiful and sexy," as Bassi put it — and collaboration with other designers and project stakeholders. Users can sketch out 3D models, then push and pull them with freeform sculpting techniques, similar to manipulating clay. SolidWorks Industrial Design will be available beginning in April.

The locale for next year's SolidWorks World promises more wintertime sunshine; the conference will be held in Dallas, Texas, January 31–February 3. "I'm very excited about the future of SolidWorks," Bassi said. "It is very bright."