They may look like something from a science-fiction movie about a future populated by cyborgs, but powered exoskeletons — wearable robots that augment their users’ physical abilities — have been around for more than 50 years. Back in 1965, GE began its Hardiman initiative, a joint Army–Navy project that sought to dramatically increase the amount of cargo, machinery, or ordnance that a human wearer could lift. According to GE, the 1,500-lb, 30-joint Hardiman prototype suffered from stability, reliability, and power supply problems, and walking speed was limited to less than two miles per hour.

A little more than a half-century later, robotic exoskeleton technology has advanced so much that it’s enabling paraplegic users to walk again. “Suddenly, it is becoming real,” said Kyoungchul Kong, a professor of mechanical engineering at Sogang University, South Korea, and the CEO and founder of SG Robotics.

Kong heads up a research team that comprises members from the Sogang Mechanical Engineering department, SG Robotics, and Yonsei Severance Rehabilitation Hospital. These collaborators are working together to develop wearable robots and ultimately, help people with disabilities live independently.

Kong discussed his team’s work at the SOLIDWORKS World 2018 user conference, showcasing two of their inventions: The WalkON suit is designed to help users with completely paralyzed legs walk; the ANGELEGS robot assists users whose walking ability is impaired by age or injury, helping them manage inclines, climb stairs, and cover longer distances. 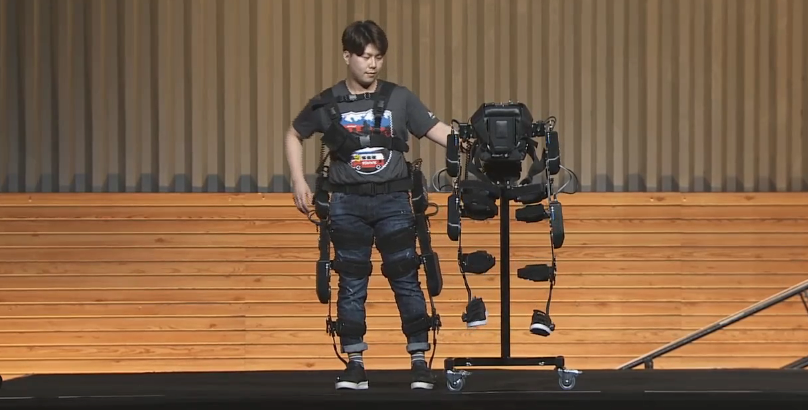 The ANGELEGS wearable robot, demonstrated here by a member of Kyoungchul Kong's research team, provides walking assistance without overriding the user's own motions.

It seems counterintuitive, but providing less assistance to the user presents a greater design challenge. ANGELEGS is intended for wearers who have some ability to walk under their own power, so the wearable robot must feel “neutral” and accommodate the user’s own motions without resistance. “These are real challenges,” Kong noted. “This is much harder than [the solution for] full paraplegic [users].”

Perfecting the function of the mechanical controller, or “brain” of the robot, and the user’s interaction with it, is a thornier task than designing the exoskeleton. “The hardest challenge of ANGELEGS is about control; with WalkON, it’s about design,” Kong explained.

For the WalkON unit, the team kept real-time control “as simple as possible” and chose buttons for operation because “reliability must be 100%” — if the robot’s force and speed exceed the wearer’s limitations, it could cause injury. Multiple actuators are also used to support reliability, since there is “real risk” of leaving a user stranded if one breaks during use and has no backup.

When they began working with wearers to test their prototypes, the team was surprised to learn that users typically prefer a consistent response from the robot, rather than a gait that adapts to them. “Almost half of my papers were just trash,” Kong said, because the revelation ran counter to what he had theorized. That was “an emotionally difficult time,” he acknowledged, but “we are writing some different papers now.”

Software to Speed the Process

According to Kong, when the exoskeletons are being produced for a particular user, they have to be redesigned each time for a custom fit, so the ability to quickly tailor designs is essential. A handheld laser scanner enables the team to quickly create a model of the wearer’s lower body. “It comes with all the STEP file, IGES file [support] so I can use the 3D scan file really easily,” Kong reported. 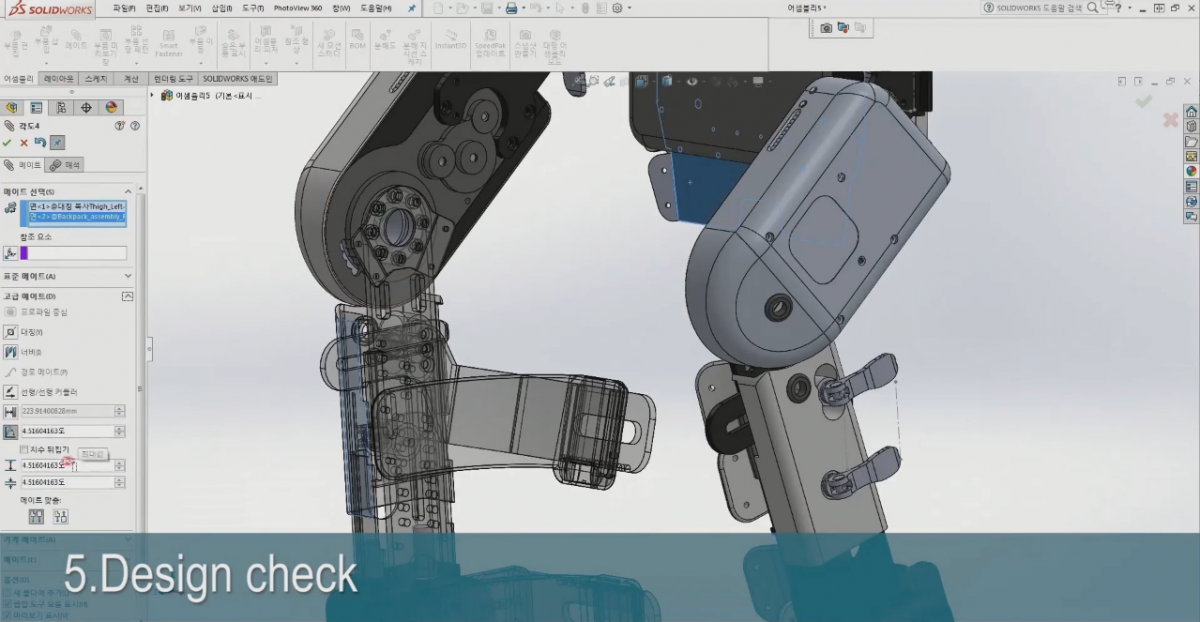 After 3D scan data (top) is imported into SOLIDWORKS, the team is able to adjust dimensions for proper fit, and perform safety and function checks (above).

Relying on visual part prototypes, rather than physical mockups, saves the team precious time leading up to robotics competitions, conferences, and other events that test and showcase their work. With finite-element analysis in SOLIDWORKS Simulation, the team is able to evaluate the part strength and safety of the robots prior to fabrication.

Kong explained that the SOLIDWORKS interface helps the team to perform these custom design alterations, and verify that they are ready to proceed to fabrication, within a few hours. Once the design is complete, 3D printing enables the team to produce customized parts very quickly. “Everything can be done in five hours,” Kong noted.

Stepping Boldly into the Future

Kong’s company is still at an early stage of commercialization, and is in the process of obtaining approvals from agencies like the FDA, which will take at least a year, he said. In the meantime, they will work to make the system lighter, and to simplify operation further. Another focus of refinement is cost reduction: “My hope, or goal, is I want to make the robot as cheap as possible,” Kong noted; he is considering rental or leasing options.

The team will also work on optimizing design variants specialized for different markets. Eliminating functions that are unnecessary for a particular user group will result in a lighter, less expensive product, Kong explained. There are many groups looking into powered exoskeleton technology for military applications, but SG Robotics won’t be among them. “I want to develop technology for helping people, not for hurting people,” he stated.