Startup envisions clothing that helps wearers better understand — and care for — their own bodies.


Modern life is rife with threats that are underestimated because they’re not immediately dangerous. Chronic stress is a prime example: Over time, it increases the risk of heart disease, depression, memory problems, and other serious issues, but we often write it off as a normal part of daily life. Like the proverbial frog, we’re content to stay in the pot as long as the water temperature increases gradually, unaware of the severity of the threat until it’s too late. “Our bodies are extremely adept at normalizing around things that are not ideal,” observed Arnar Larusson, cofounder and CEO of Tyme Wear.

Larusson, who is descended from a long line of doctors and nurses, seeks to battle illness preventively by giving people improved awareness of their bodies. Tyme Wear is currently developing a garment that not only tracks the wearer’s breathing, but immediately calls attention to undesired behavior — such as rapid, shallow breathing in times of stress — with vibration cues.

Controlling the rate and depth of the breath can lower the heart rate and blood pressure and reduce stress, so monitoring breathing behavior in the moment can potentially benefit everyone from yoga and meditation practitioners to those who suffer from anxiety. In addition, athletes chasing their personal best can get more insight into their exertion levels and optimize training; office workers slouching over their keyboards can be reminded to sit up straight and breathe more deeply. “By creating awareness, we’re arming you with the tools to take a different path,” said Larusson.

Potential medical applications include patients with chronic obstructive pulmonary disease (COPD) and other breathing problems who benefit from monitoring on a regular, ongoing basis instead of only during crises. “[Medical professionals] are, most of the time, treating things after they’ve gone bad,” Larusson observed. “We need to start addressing these problems before they become $30,000 emergency room visits.”

More Than a T-Shirt

The Smart Shirt — the garment that forms the foundation of Tyme’s monitoring system — is, at first glance, no different from the Under Armour or Nike products sold at your local sporting goods store. It’s a streamlined, tight-fitting, tank top made from soft, stretchy polyester–nylon fabric. 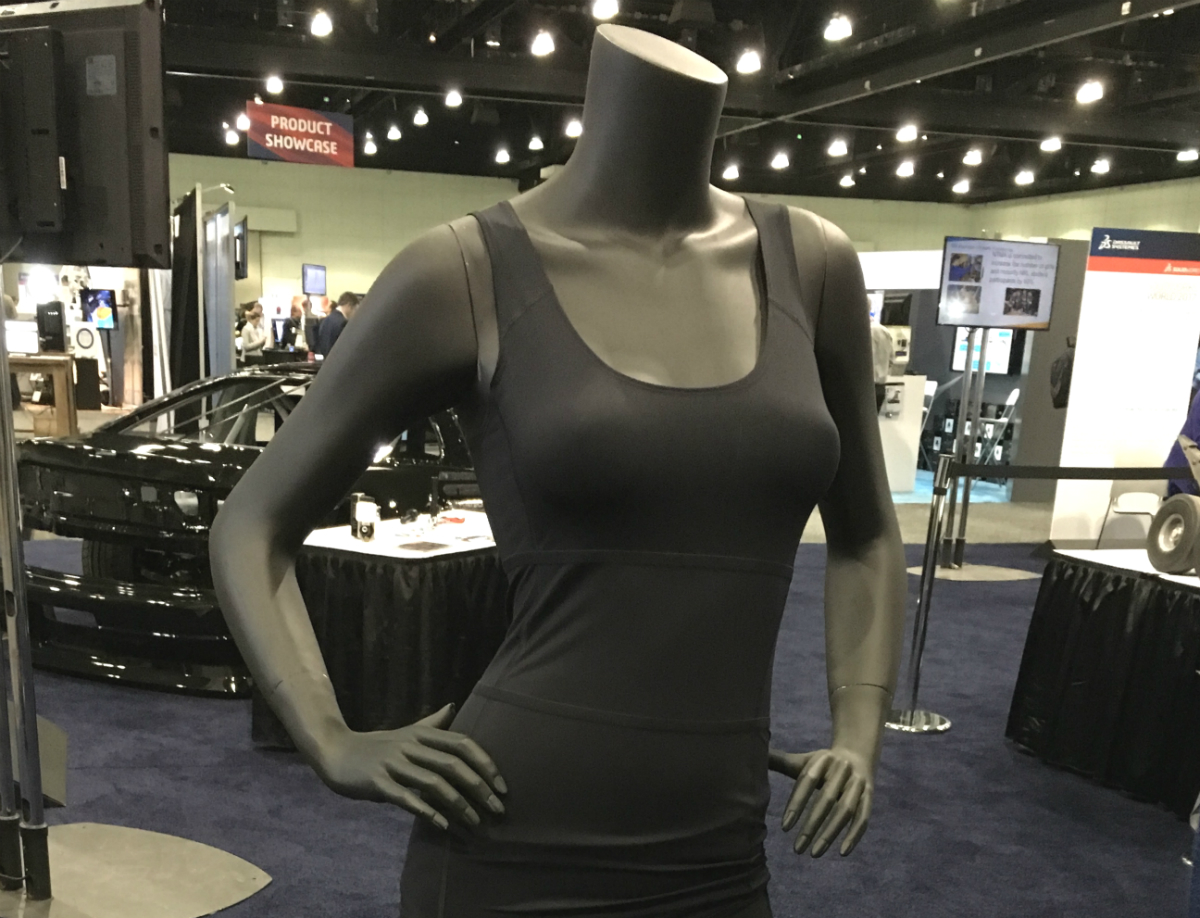 What differentiates it is the integrated technology: Two continuous sensor bands encircle the torso and feed data to a lightweight, detachable puck that rests in a pocket between the shoulder blades. This puck wirelessly transmits data to the Tyme App, where users can set goals, view their performance, and compare progress over time. It also conducts some onboard calculations, and vibrates to alert the wearer.

The smooth, flexible sensor bands are sweat-resistant, washable, and seamlessly laminated to the shirt just like a regular applique, so no unique manufacturing technique is required. Stretching a sensor band changes the distance between its metallicized component threads, so it can accurately track each inhalation and exhalation. Because one band is located at mid-chest and the other is closer to the waist, the system can distinguish between shallow or restricted breathing that inflates only the upper chest, and deep breathing that expands the belly as well. It can also determine torso position, detecting slouching, side bends, and erect posture, for example.

The system is autocalibrated to the size of the shirt — a medium-size women’s top will have an expected typical inhalation volume that’s smaller than a men’s large, for example — but can also be calibrated with respect to the individual wearer. “It’s completely adaptive on the software side,” said Larusson.

The Smart Shirt is the result of a two-year development process that started with regular T-shirts, Larusson said. “The first ones were really crappy,” he recalled with a laugh.

The Tyme Wear team used SOLIDWORKS to design the multifaceted product, bringing together a 2D fabric pattern for the shirt, the integrated sensors, the electronics interface, and the rigid puck that encases the electronics. They paid special attention to making a robust transition between the soft, flexible fabric and sensors and the rigid enclosure, as repeated bending and stress at that point could lead to failure. Ultimately, they decided on stretchy fabric layered with polyurethane film that withstands washing and sweat.

The team has not used the simulation tools in SOLIDWORKS, as simulating fabric is a challenge, Larusson reported: “The softer the material, the harder it becomes.” Instead, the team prepared multiple rounds of prototypes, using a Stratasys 3D printer to create the electronics-enclosing pucks. They enlisted the help of more than 100 yoga practitioners to test the product, and knew they were on the right track when the testers forgot they were wearing the Tyme shirt. “We want it to be transparent,” said Larusson.

Consumer Design, or Medicine on the Mind?

Although Tyme Wear plans to address medical markets eventually, Larusson believes there’s a real advantage in starting off with a consumer focus. With devices developed purely for medical purposes, he explained, comfort usually takes a back seat to function, and aesthetics is largely ignored. As a result, user engagement and compliance suffers. “I think that’s a total tragedy,” he said.

A consumer-oriented design perspective, in contrast, can yield products that are easier to use and more engaging, Larusson believes. He envisions individual monitoring devices as one way to provide more democratic access to medical care; patients in remote areas, for example, could have their breathing data sent directly to a doctor far away, rather than wait for an in-person appointment.

For the time being, Tyme Wear will stick to consumer markets, beginning with yoga practitioners and expanding its focus to encompass endurance-minded exercisers and athletes in 2018. After that, the company will push into the medical realm, but that step is at least three years out, according to Larusson.

After a round of angel investor and venture capital funding, the company will launch its Kickstarter crowdfunding initiative in April or May, Larusson predicts. Prices have not been finalized, but will be in the realm of $150–200 for a starter kit (comprising the Smart Shirt, data-transmitting puck, and app) and $80–100 for the garment alone. The product will be made in the United States, Larusson confirmed.